Number Five on the Meeple Like Us Ten Top Best Board Games 2017 Edition!

This is the big leagues, buddy – the top five. I mean, sure – this isn’t a performance that’s going to win you a medal. Not even a bronze one. I’m not even sure you’re allowed to stay in the stadium after the race if you come fifth. Fifth?? Get the hell out of here, you disgust me.

Wait, no – come back. Sorry, just – I’m just a little disappointed. I know you’re capable of so much more. Just… just try a little harder next time. I am so proud of you. But not as proud as I could be. See those games behind you? They missed out on the top prize by too much for it to really sting. This is a list of intensely good games, but those schmucks we’ve just made polite conversation with? They’re below average intensely good games. Arithmetic is cruel like that. Part of the cost of greatness is the weight of expectation. Sorry, but that’s just how it is. Buck up your ideas. I want to see you placing in the top three next year.

Five Tribes is a game I think about a lot. Sometimes I think about it instead of sleeping. All those vibrantly coloured meeples. Those shifting sands. Those ingenious combos. Mancalas interleaved with mancalas. The possibilities. The missed chances. The sub-optimal plays. The decision fatigue. The defeat. The disappointment. The tiredness. So tired. Sleep. Must sleep. Must sleep forever.

Sure, Five Tribes will wear you out. It’s the cardboard equivalent of being twenty years old, in love, and in bed with an enthusiastic and energetic partner. You’ll love every single minute of your well-earned exhaustion even if you’re not entirely sure what it is you should be doing moment to moment. Pauline: I really like Five Tribes, but I don’t see why you think it’s so much better than Yamatai. I think it just takes a bit too much investment of time and effort before you get good at it. It’s not something you can just whip out at a family gathering.

Michael: There are lots of things that are very good that you wouldn’t whip out at a family gathering. As I implied above I’d much prefer to whip it out with a youthful, enthusiastic and energetic partner.

Pauline: Those days I’m afraid are long behind both of us.

Now that I’ve played Pandemic Legacy I don’t know if I could ever go back to playing regular Pandemic. The legacy idea is just fantastic because you are really invested in your choices. Every action has such lasting consequences that you can’t help but take it all seriously. You become attached to the characters and it makes you worry about putting them in harm’s way. It can be harrowing when you play and games go badly. At this point, we’ve completely destroyed a serious chunk of the map thanks to a number of less than sensible decisions on our part. Sometimes when you have a really bad game it can take weeks before you can even consider facing up to the challenge again. That just shows what a great game Pandemic Legacy is and how much it keeps you engaged in the experience. It’s totally worth the money even though you can only play it a limited number of times. There’s real interactive storytelling in here, and what else would give you so much entertainment for such a low price per hour? 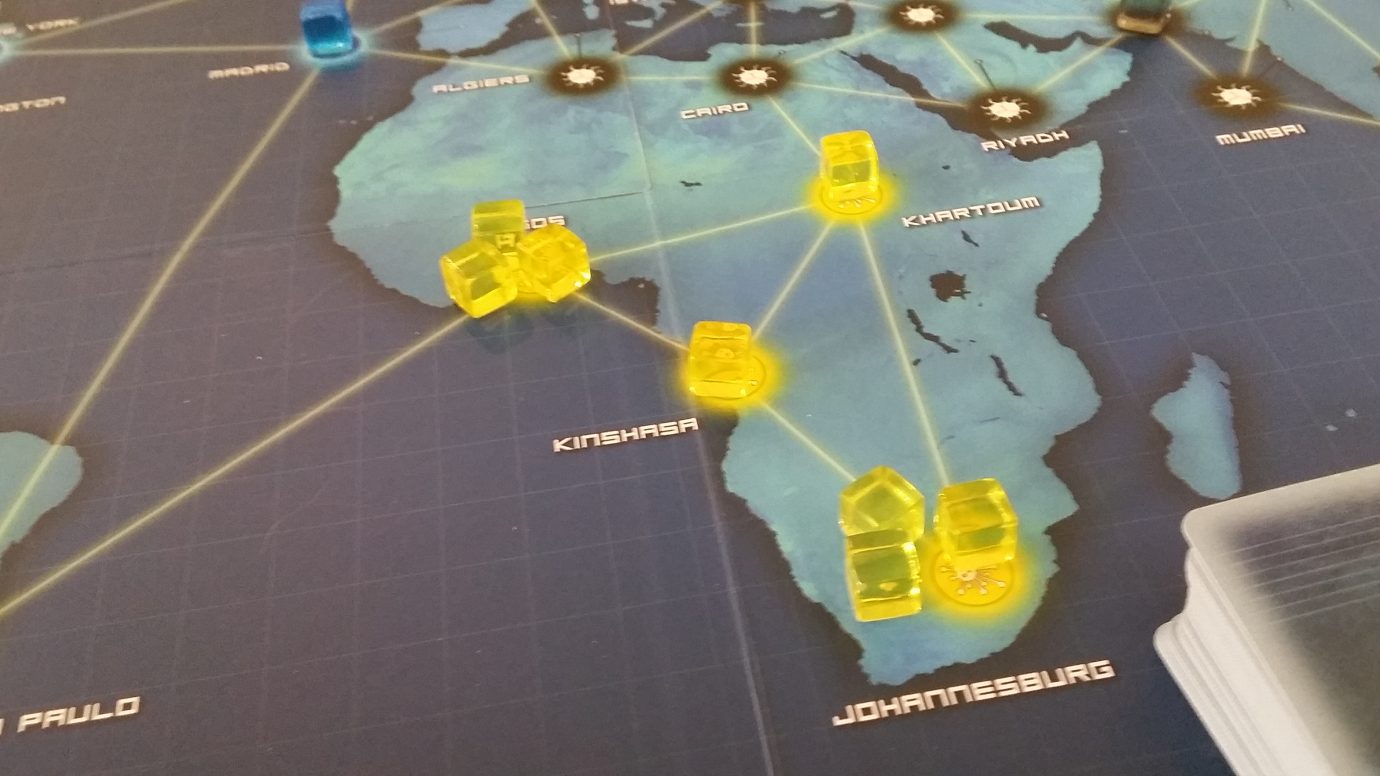 Not pictured: The Pandemic Legacy board. No spoilers.

Michael: This one didn’t make my list because we’re still not finished with it and including it felt a little premature. Plus, I can hear screams coming from the box at night. I’m not sure I want to play past July considering the state in which we left the board.

Michael: My shelves are absolutely covered in blood! It’s sloshing over the sides of the box. I’m sure I can hear a riot going on in Shanghai.

Pauline: Perhaps the shattered remains of our world would be better off without our ‘help’, now I think about it.