Number Two on the Meeple Like Us Ten Top Best Board Games 2019 Edition!

Here you stand at the entrance chamber to the throne room. The quality of nobility here is higher – every eye you meet belongs to a Duke or Duchess at least. Every single game here is in the direct line of succession. This is the waiting room of destiny, and everyone knows it. You pass through this room twice in this life – once on the way up the ranks, and once on the way down. Or sometimes, not at all. The deposed royalty of years gone by lingers here, and they have not yet forgotten that once upon a time all of this belonged to them. If there’s a word to describe the ambiance of the room, it’s ‘thirst’. Watch your back.

At the two year mark of Meeple Like Us, I still thought that no game could ever dislodge Scrabble from its position as my favourite game of all time. And to be honest, there are times that the position of #1 and #2 is decided only by a mental coin-flip. It’s still that close. Ahead of many excellent games I have played over the course of this project it is still Scrabble that represents, to me, an apotheosis of board game design. It is a terrible word game, don’t get me wrong. That’s because fundamentally it’s not a word game. Scrabble, you see, is a war game. Scrabble is about area control and area denial. Your letters aren’t for words – they’re weapons. They’re the munitions you’ll leverage to stop your opponent from being able to make words of their own. You don’t want to show off your vocabulary here – that’s how you end up getting stomped. You want to play the most miserly words you can so as to keep the good multipliers out of an opponent’s reach. If you can’t take a tile, you need to burn it so nobody else can have it. It’s hard to find people that will play Scrabble with me these days, but make no mistake – this is the closest thing I can think of to a perfect game. Those that would do it down simply aren’t playing it to its full potential. This isn’t a game that shows itself off in its best light with clever wordplay. The only book you need to have read to excel in Scrabble is the Art of War. It was deposed last year in a surprise coup, but this is a game that never has to seriously worry, at least for now, about its place in my affections. 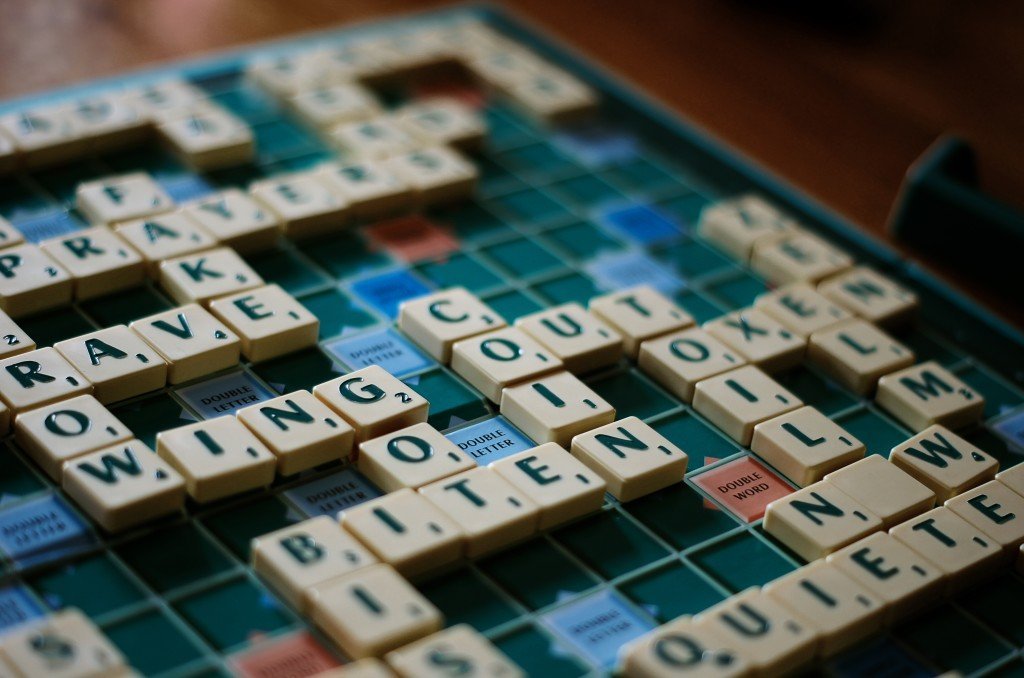 Used under the CC-BY 2.0 licence. Available from www.flickr.com/people/[email protected]

Pauline: In your review of Scrabble you basically channeled the world of Terry Pratchett and presented it as an extended love-letter in the form of a military lecture. It’s one of the weirdest reviews you’ve ever done. It’s not really even a review.

Michael: It’s absolutely not a review. It has very little insight into why Scrabble is so great. It’s more a way of trying to show people that it’s a much deeper, richer and more interesting game if you play it as an absolute bastard. The two mindsets of Scrabble players are incompatible. There are those of us that play it like a war game – area denial with letters as ordinance. We’re the ones that deploy those little dickish two letter words, because it isn’t about vocabulary for us. It’s about controlling the board. But that doesn’t work for people with the second mindset.

Pauline: What are they doing, in comparison?

Pauline Picks: Telestrations (up from #3)

Telestrations is absolutely amazing – so much fun for so little setup. When Michael was running his game nights at RGU, it was easily the game that got the most play. We literally wore out a full set of pens and are a good way through the next pack. The genius of the design is that you don’t need to be able to draw – in fact, that’s a drawback if anything. The worse you are at the game, the better – that’s why you might end up with a clue like ‘ghost’ and end up with someone drawing a Ku Klux Shrimp. Those hilarious misunderstandings lead to a game that’s massive amounts of fun. It’s also an amazing ice-breaker – I’ve used it with my students at Dundee and Angus college and it’s gone down incredibly well. It’s gone up in the rankings here because every time I try it in a new scenario, it excels. It’s even part of the student induction at my old college. It never fails to, at the very least, be a lot of fun. 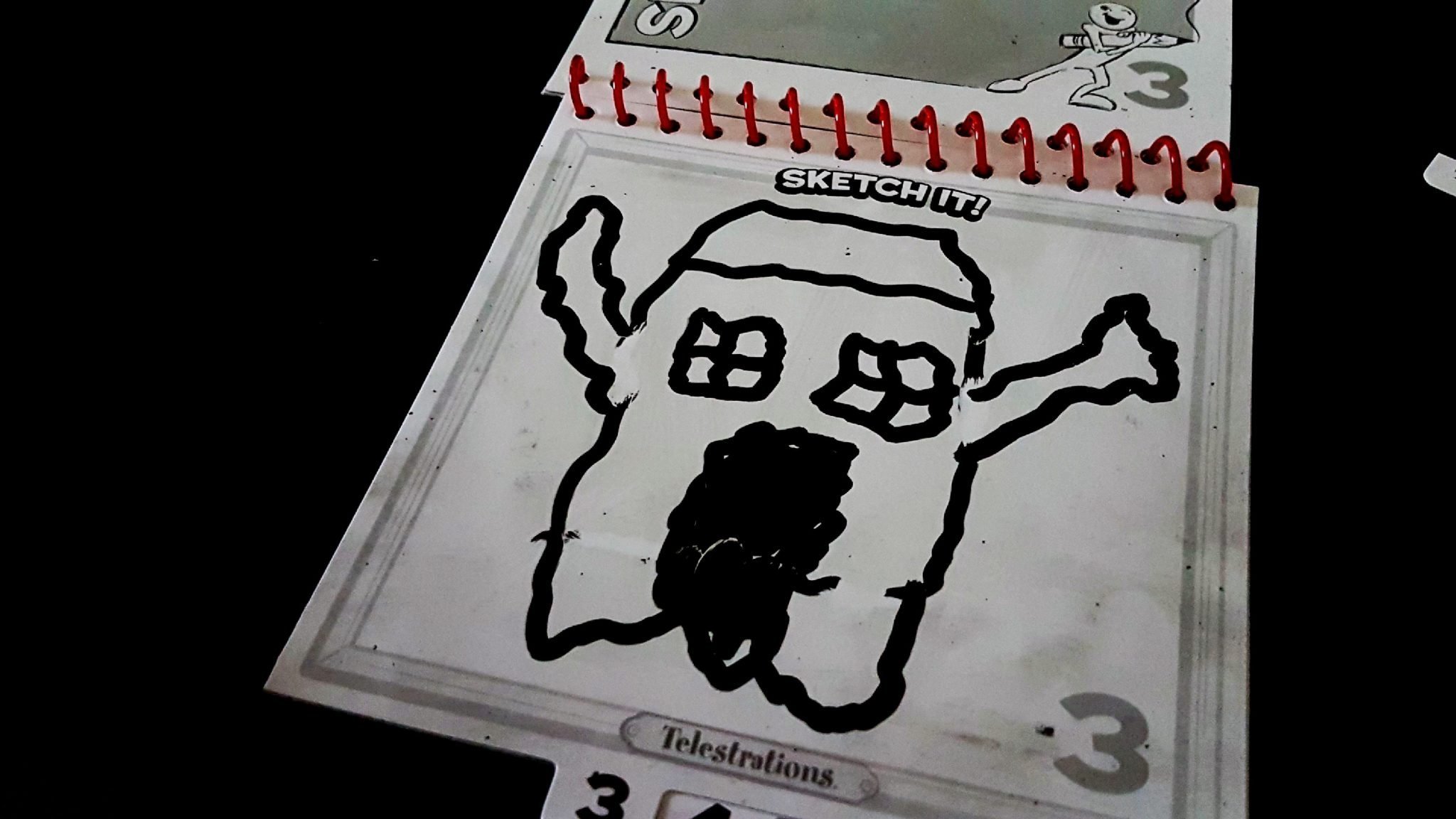 Michael: Yeah, I concur. It’s a game with almost zero distance between ‘opening the box’ and ‘having fun’ and that’s not something you can say about many of the games on this list.

Pauline: I’m still convinced the only reason you don’t have it on your list is because you’re a massive game snob. You know it’s more fun than pretty much anything you’ve named yourself.

Michael: Well, fun is only one of the things I’m looking for in my games. I also desperately need pompous fuel for a games academia career that can no longer be sustained by my meager and dwindling natural talent.

Pauline: 2020 – the year you crashed out of your ivory tower and straight into the shite that everyone else has to wade through. Like Icarus finally rolling a critical fail on his bluffing check.