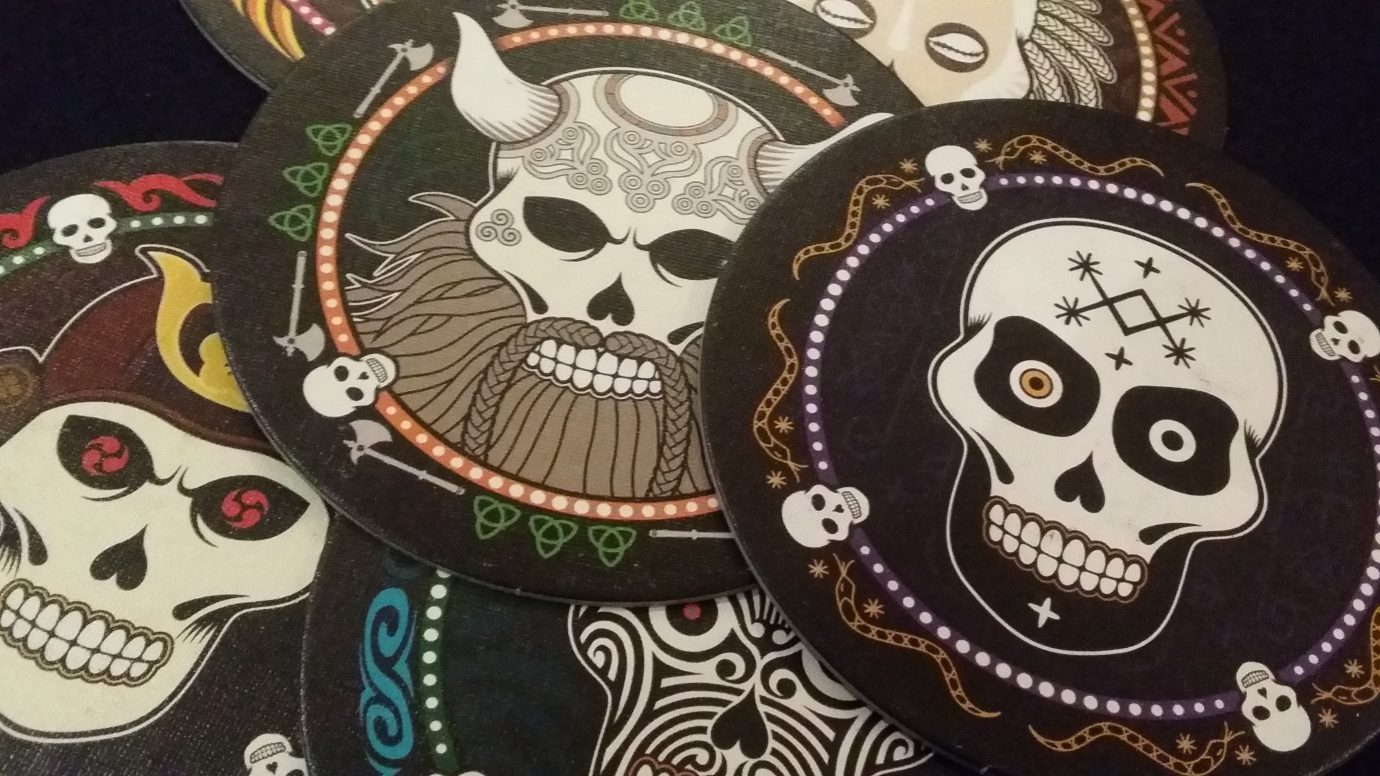 If there were ever a box to make you think it opening it would inflict upon you a sinister Aztec curse, it’s the one for Skull. 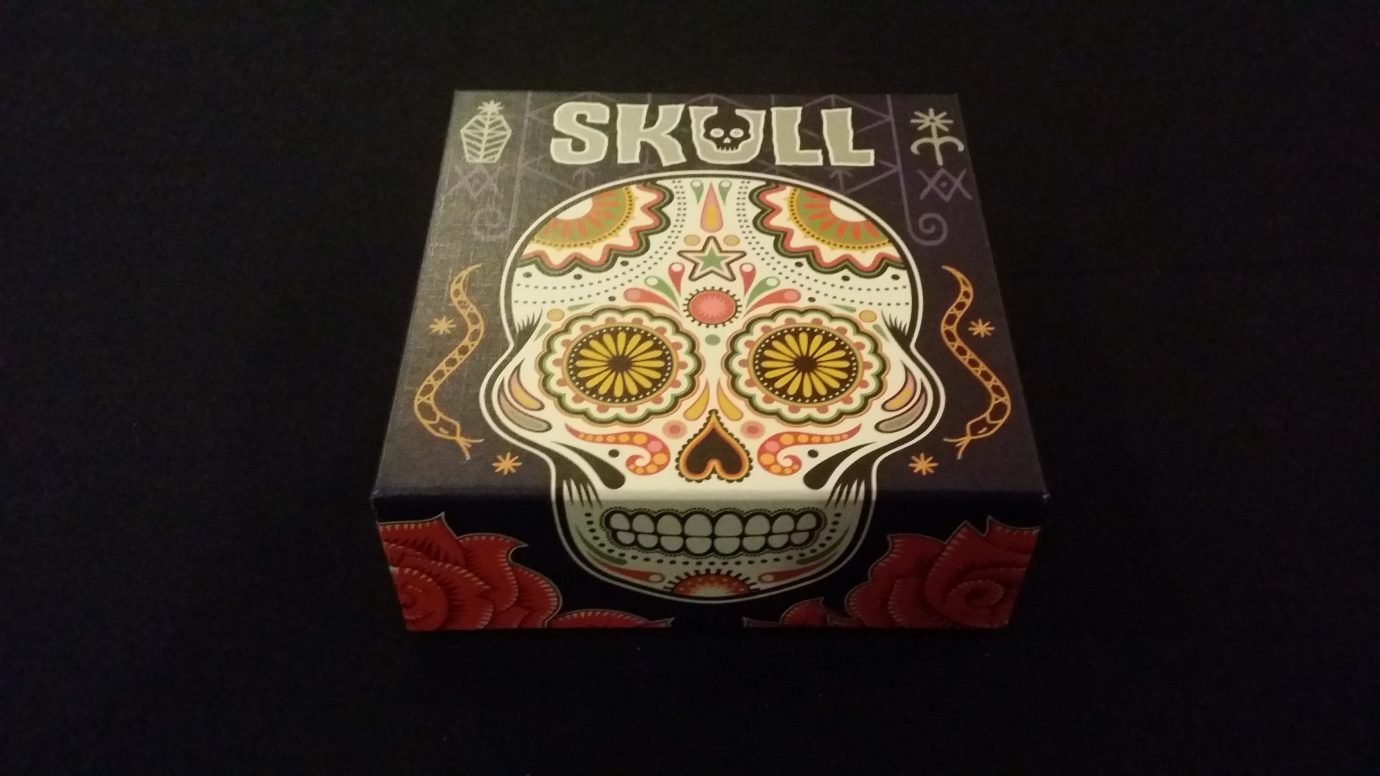 Open me. I dare you.

It’s appropriate that the visual design is so striking for this game – it has to be, really. You can make your own version of skull right now with a few beer mats and a felt tip pen. You can play it with a standard pack of cards if you like. The game is so simple that you don’t need to pay money to play it. You’ll want to though, if it’s an option, because this offering is absolutely gorgeous. They really went to town here making something that looks beautiful. The design adds value far beyond what you’d get with a home-brew knockoff.

Skull, or sometimes ‘Skull and Roses’, is a deceptively simple game of bluff and counter-bluff. Each player gets four discs. Three of these have a flower, and one has a skull: 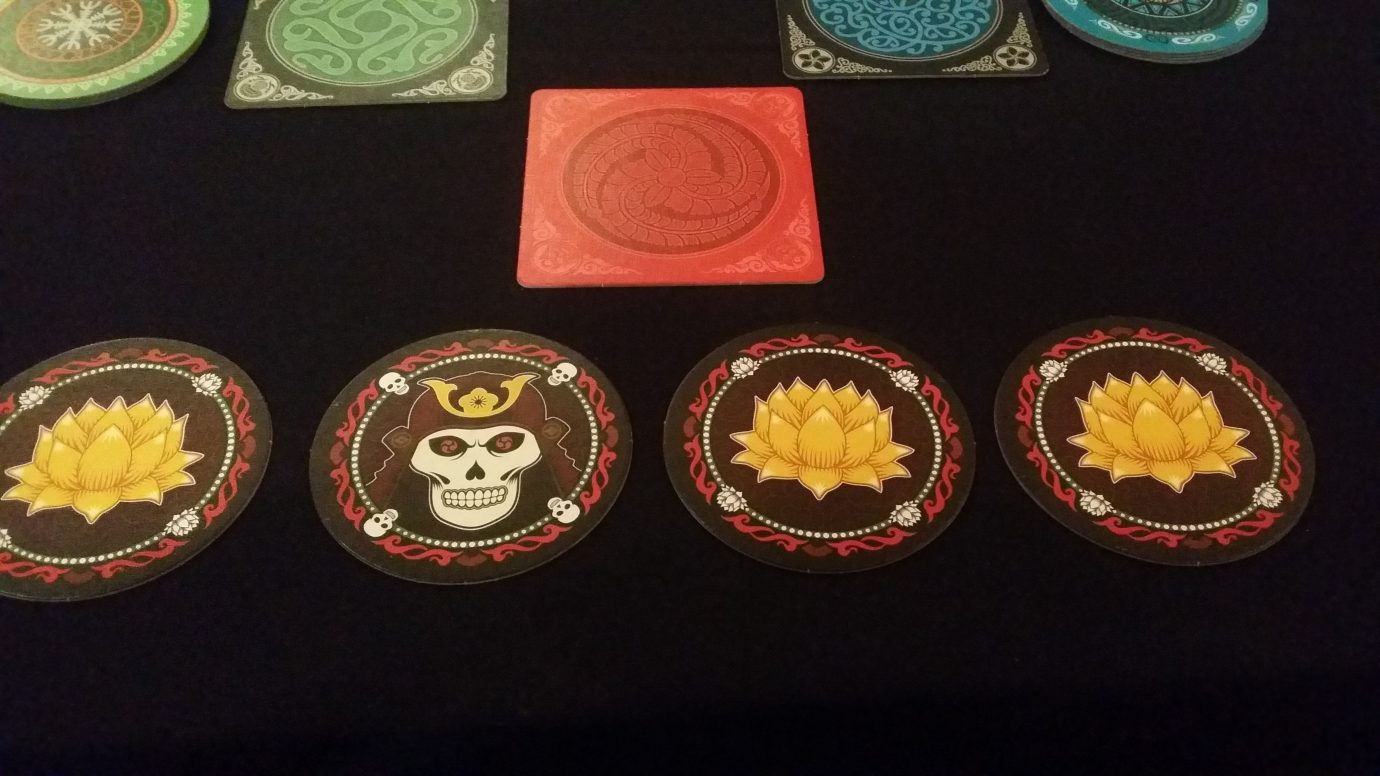 Each player also has a mat, marked out with symbols of your ‘tribe’. This is where you’ll stack your discs as you play. There’s one fixed round where each player places a disc, of their choice, on the mat in front of them. Players then continue, in play order, to lay down discs on the mat until someone decides they don’t want to play any more discs. They then issue a challenge to the group.

‘I think I can turn over… three discs’, says Pauline.

At that point, there’s no more laying down of discs. Play moves on to bidding, with each player deciding if they’ll pass and remove themselves from the round, or raise.

‘I can do four’, says Michael.

‘I pass too’, says the fourth.

Looking over at Pauline, they all wait for a response. Will she go to five? Or will she…

Now he has to win his challenge, which is done by flipping over discs in the hope that he doesn’t reveal a skull. If he does, he loses one of his own discs, chosen at random by the player that forced the fail. Nobody knows, except for him, what disc was discarded. It probably won’t be a problem, but if he loses his skull in that random selection then he’ll have to spend the rest of the game participating in a gunfight with an unloaded pistol.

But the thing is… he needs to flip over all of his own discs first. If he gets past his own stack, he then gets to flip discs in whatever order he likes – the only limitation is that he needs to flip the top discs in the stack of any player before he can get to the ones lower down. Any disc could contain a skull, so you need to weigh up how you think your opponents would have been trying to bluff each other. The thought process for every disc you flip becomes a battle of wits against your very own Vizzini.

‘It’s so simple! All I need to do is divine from what I know of you: are you the sort of person that would put the skull in front of you?’

And that leads to a logical spiral of self-doubt and worry.

‘Fine, okay’, thinks Michael. He licks his lips and sizes up the game. 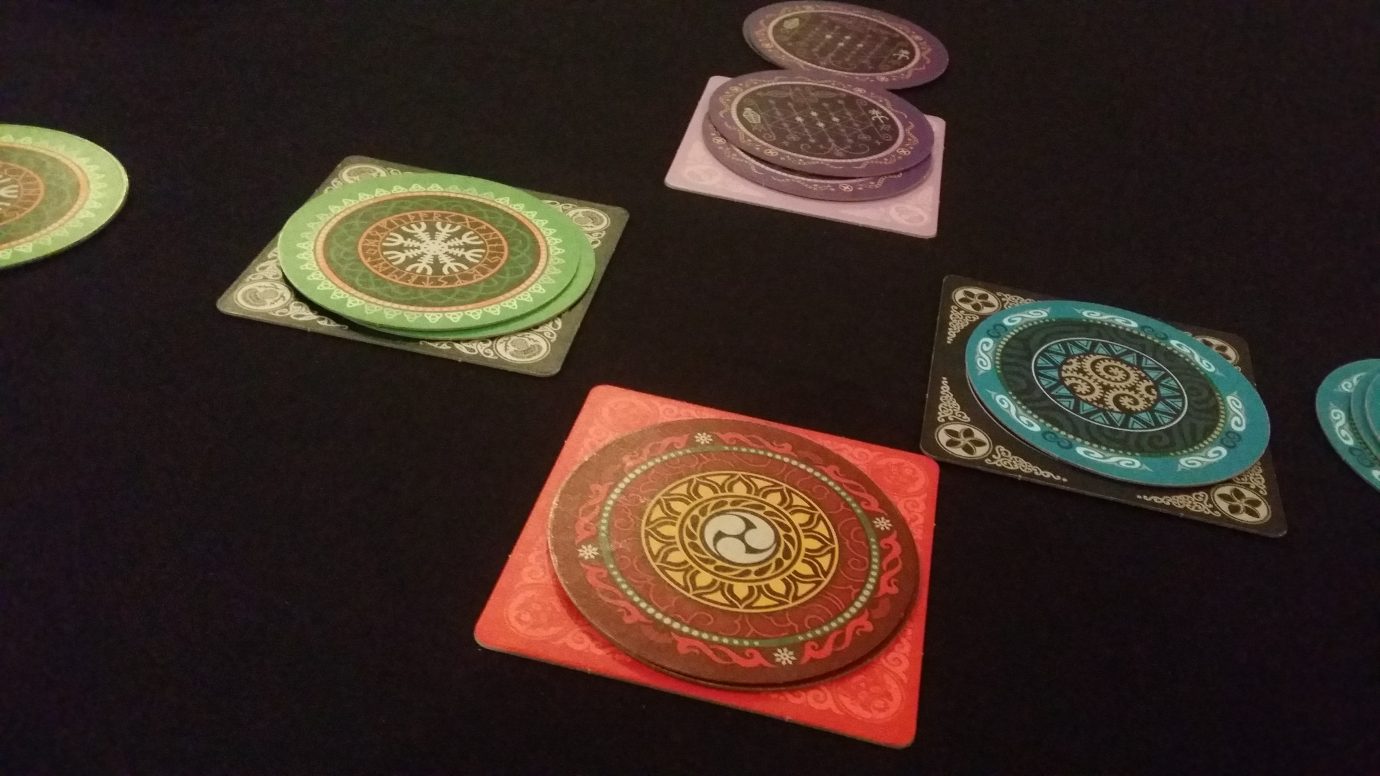 This is going to be fine.

He flips his own discs. It’s fine. He knew that. It’s all going to be okay. Half the way there already. 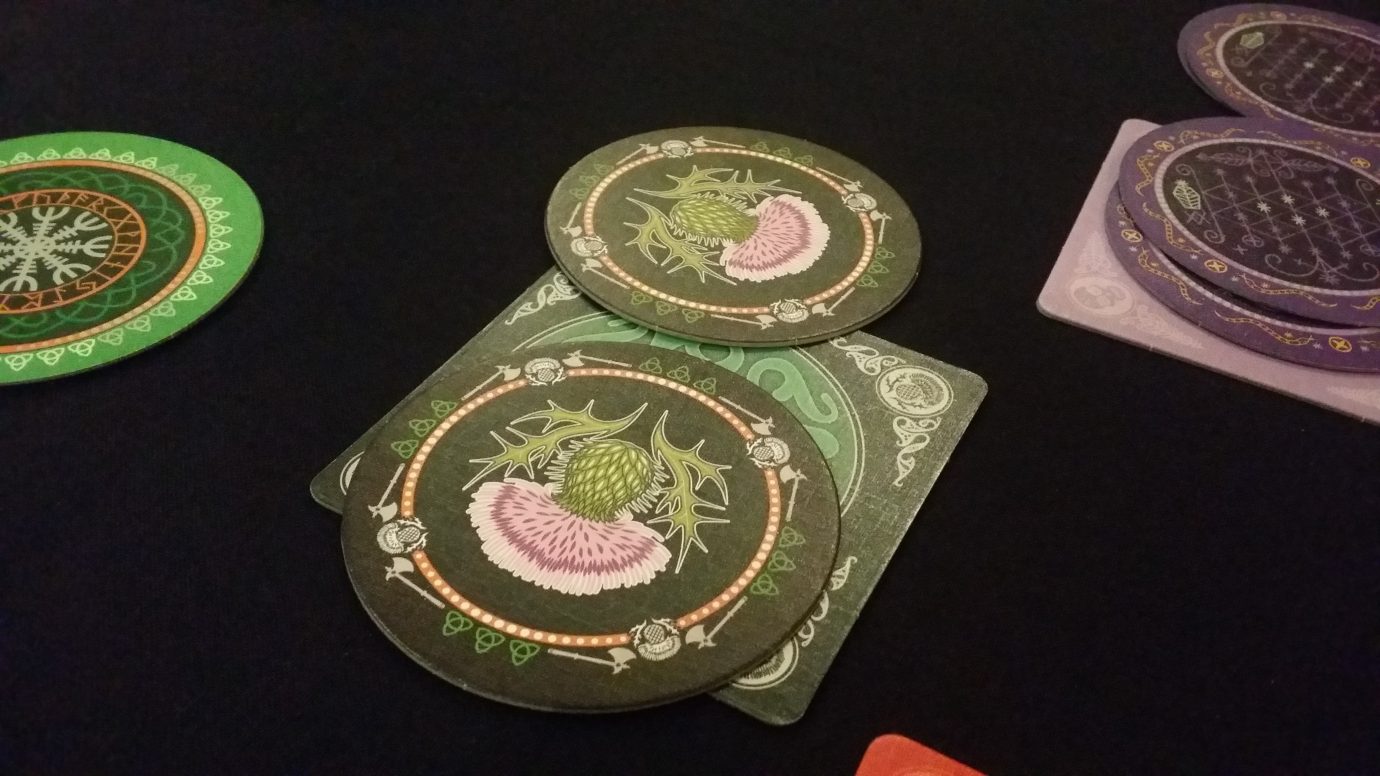 The thistles are appropriate for my people.

Then he looks over at Pauline. She probably wouldn’t have opened the bidding if she was rocking a skull, right? Unless she wanted to lull everyone into a false sense of security? Man, she dropped out of bidding so quickly that she must have a skull. But maybe she just thought the rest of us did? Unless…

He flips one of her discs. 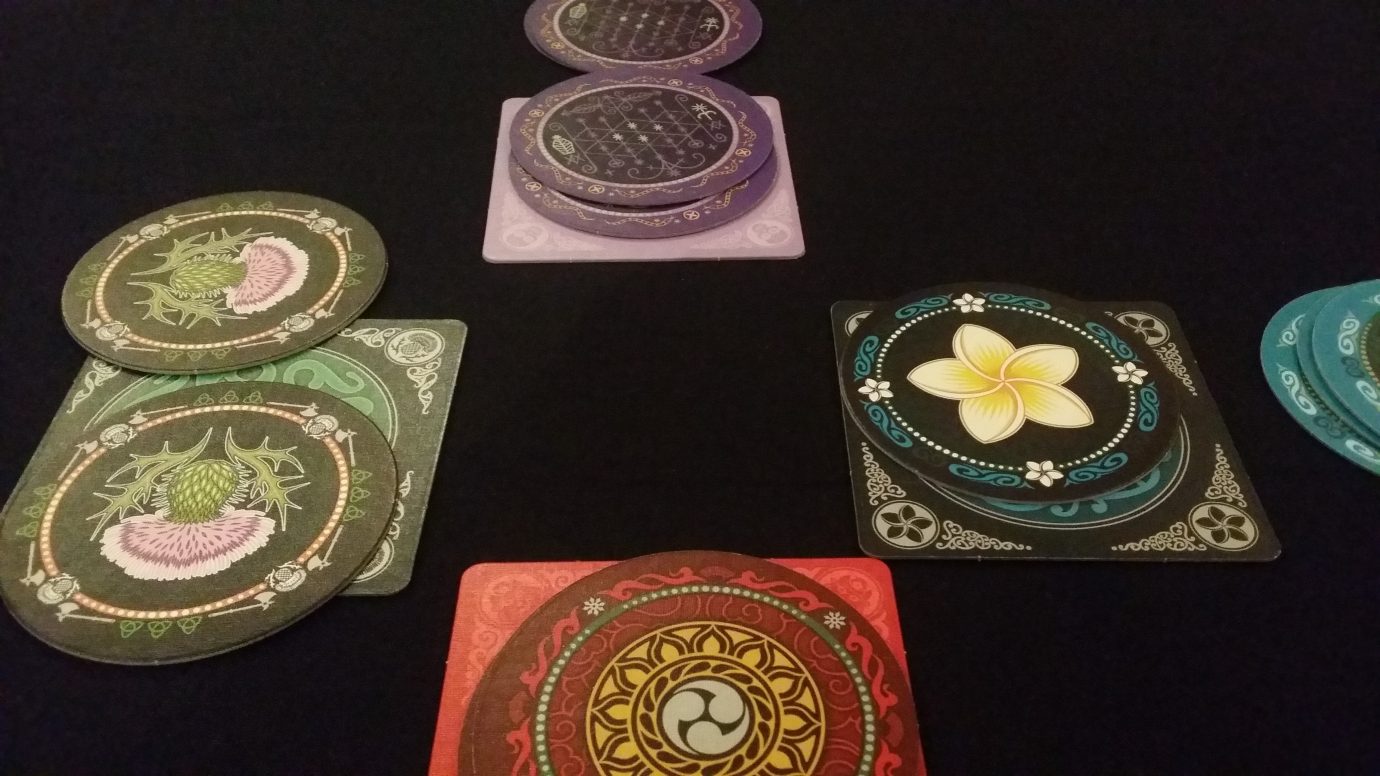 Ha, only one more to go. This is going to be so easy. He flips over one of the red discs and… 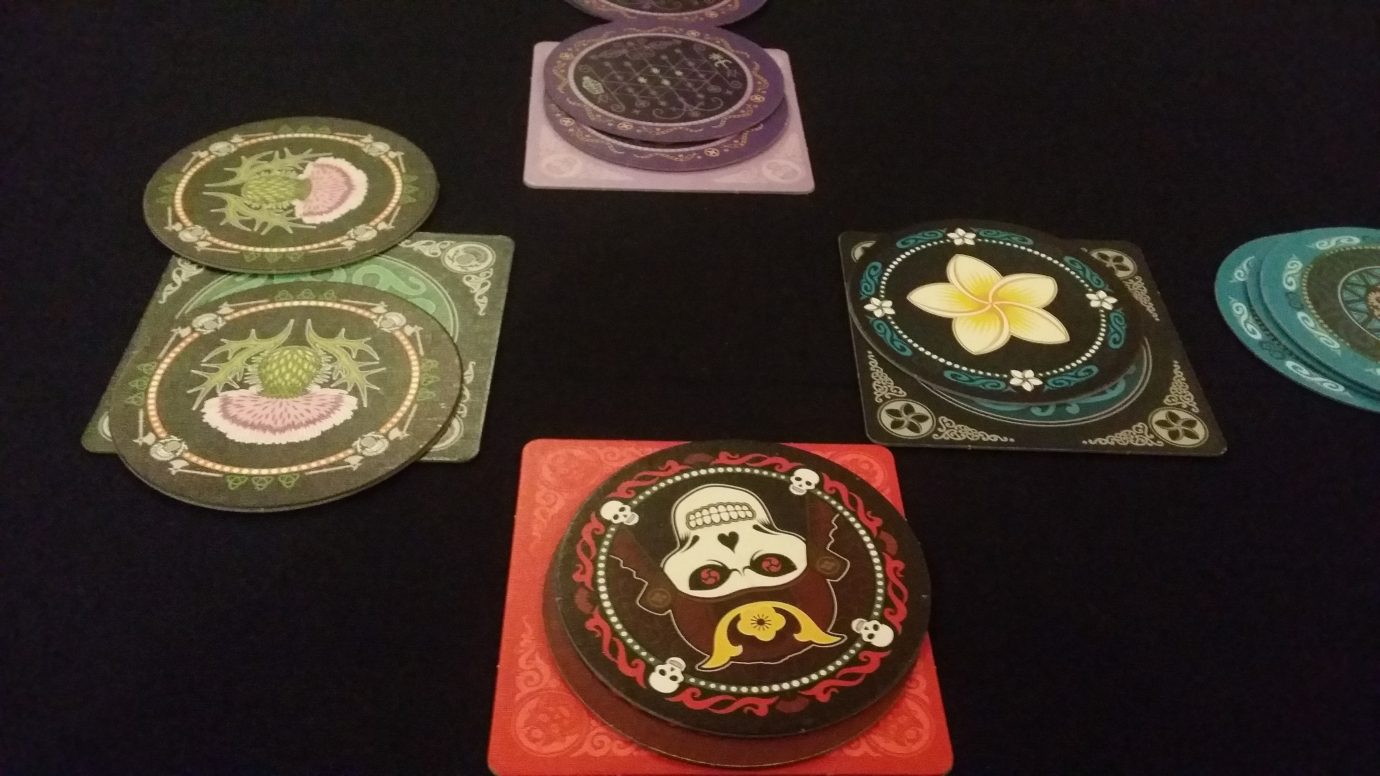 God damn it. He hits a skull, and loses one of his own discs at random. He fans them out for the grinning victor to choose. The disc is discarded, face down. It was probably a rose. Maybe it was a skull though. Everyone will be reappraising his play in the light of probability.

Next round begins with the usual bidding. Michael puts a skull down on his turn, determined to get some revenge.

But remember how you have to flip over your pile before you can get to anyone else? That means that if you placed a skull and you win the challenge bid, you’ve just lost a disc.

Oh god, why did he do that? Why would he ever do that? Who would go up against a Sicilian when death is on the line?

It’s because he couldn’t afford to let an easy challenge go by.

‘I can do one’ is trivially easy to achieve – you know what’s in front of you. You know if there’s a skull or a rose there. If anyone lets that go unchallenged, it’s a free point. So you have to escalate. If you don’t say you’ll do two, maybe no-one else will. If anyone gets two points they win – are you really going to let that happen? Who’s going to stop the bidding at two? Surely that’s also too easy a challenge for anyone to let lie? You’re going to escalate the bid, but someone else will definitely outbid you. Sure, you’ve got a skull in your stack but if you bid people will think you don’t. They’ll flip over your discs, thinking they’re a safe bet. They’re going to look like utter clowns! You’re going to look like a bad-ass Derren Brown, master of mind control.

Except everyone passes, because people are bastards. They are compete bastards. Those bastards are going to let you take on your challenge. Even the bastard that opened the bidding passes! COLLUSION! THIS IS UTTER BULLSHIT! THEY WORKED THIS OUT AHEAD OF TIME!

He flips over his own discs, revealing a skull. Everyone laughs. Well, almost everyone. He discards a second random disc, and play continues.

Skull is beautiful. I’m not kidding when I say that the art work justifies the buying of the game. Every single set of discs is different, with its own design, its own flowers, and its own skull: And you get enough of these for six players in the box. 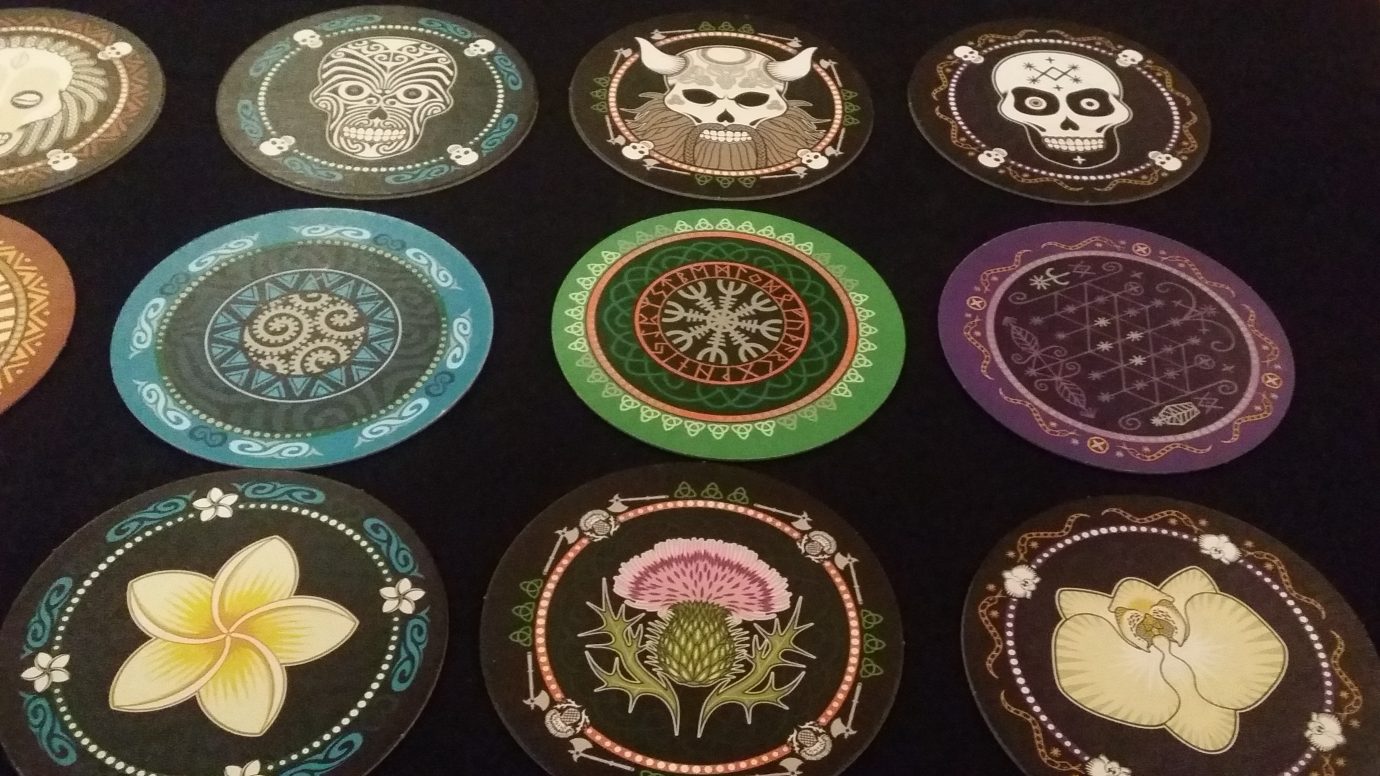 These are just nice things to own and manipulate. They have no impact on the game mechanics, but they do powerfully influence the game atmosphere. They give the whole thing a kind of weight that the rules themselves can’t really emulate.

It’s a very simple game. Incredibly simple. Like Dobble, it’s not something I can see becoming the core around which a gaming night will cohere. It’s definitely something that works well as an opening choice, or a way to end an evening on a high. It’s also something that is so quick and easy that you can whip it out anywhere. Any time you’ve got a few people in a room, and nothing to do for five minutes, you can have a game of Skull and add a little excitement to your day. You can fashion the implements of Skulling from almost anything around you. It slots nicely into your life.

Stripped down to its barest essentials, Skull is poker with all the card-play removed. I like poker, as a gaming experience. It’s a pretty boring game though, regardless of which variant you play. If you play draw, it’s ‘yahtzee with cards’. If you play Texas Hold ‘Em, it resolves around knowing probabilities. The card game in poker isn’t why people play. They play for the social meta-game around it. They play to read other players, to intimidate, to bluff, counterbluff, and call bluffs. They play for the interplay of personality. They play for the duel.

And that’s what Skull is. It’s the soul of poker, stripped out and left exposed. Its depths and subtleties are properties it absorbs from the people playing it. With a good group, this is going to crackle like electricity flowing through exposed wires. With a bad group, it’s going to be the board game equivalent of attending the funeral of a person you didn’t like very much. It’s tofu – it will only have the flavour that you bring to it. Whether that’s good or bad will depend on the people around you. If it doesn’t sound like fun, make new friends or give it a miss.