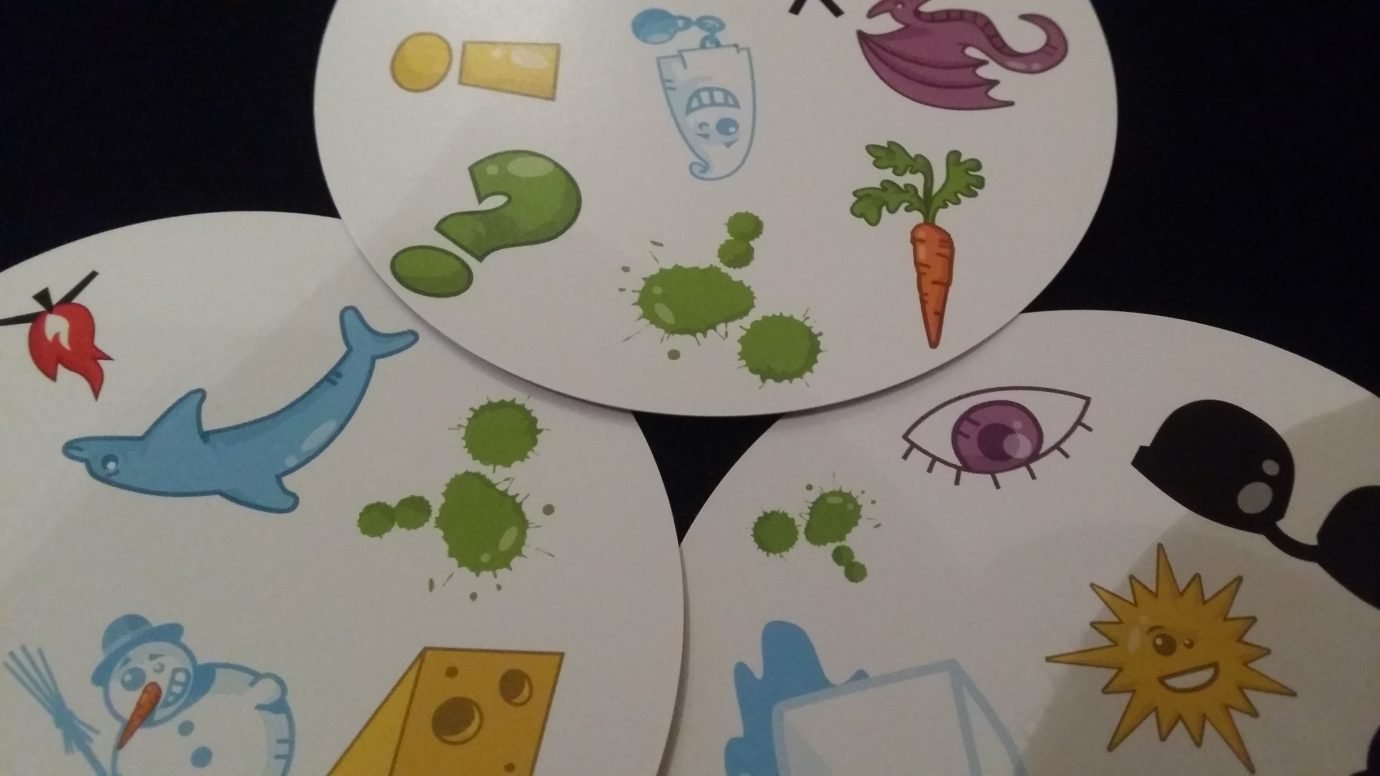 There is a condition called expressive aphasia which impacts on the language centres of the brain. It causes people to mix up the words they use, choose the wrong word for the wrong purpose, and put together the syllables of words in a way incongruous with experience and intention. It’s caused by a number of things, including strokes, head trauma, brain tumors and various progressive neurological conditions. It is also caused by the game Dobble: I know it looks stupid. Bear with me.

Okay, I’m being very glib here about an unpleasant condition with a profoundly negative impact on quality of life. However, I’m also being honest in the impact this game has on your ability to meaningfully process language. It is a game which is ridiculously, almost pathologically, simple. It is a game that will cause people to roll their eyes when you bring it out. 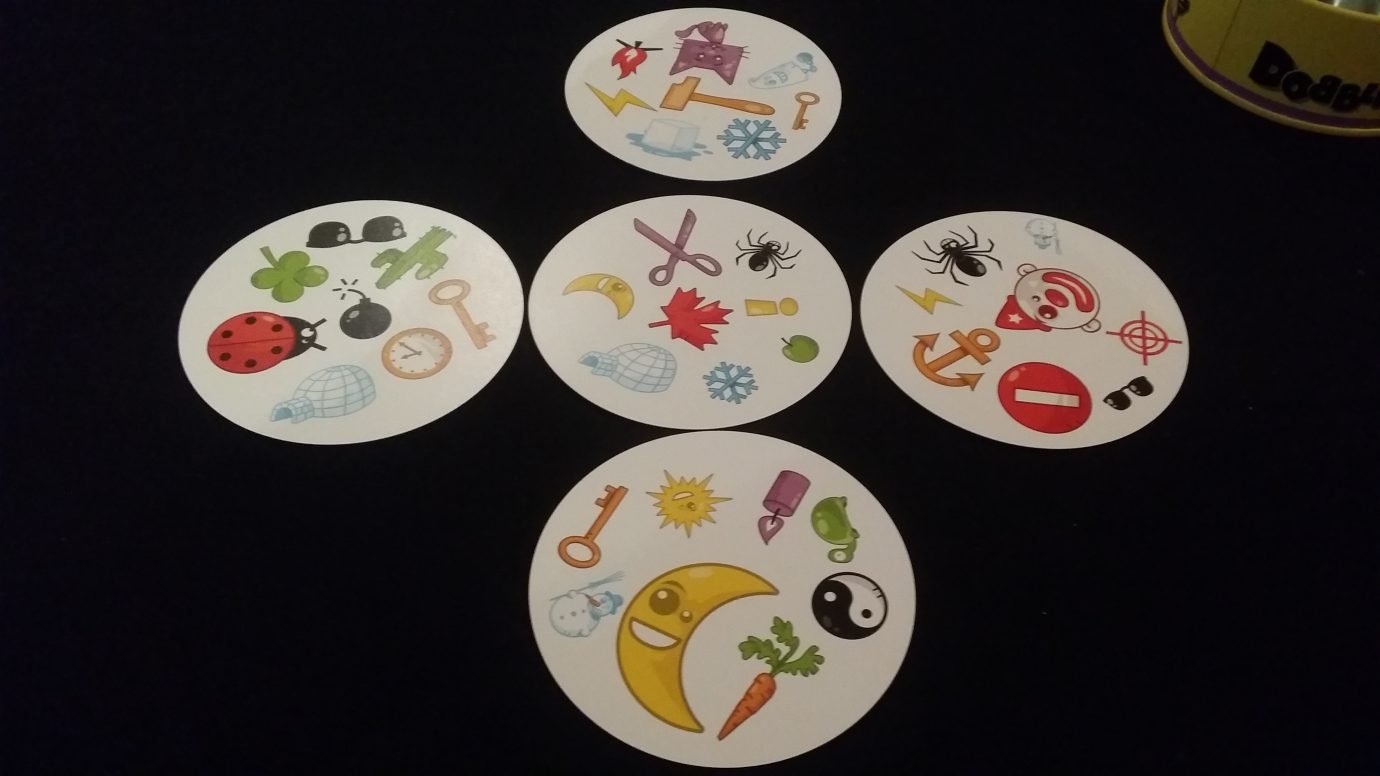 I’m getting tense just looking at this.

And that’s all Dobble is. Everyone has a card. Each card shares one, and only one, symbol with every other card in the game. There’s some simple matrix math behind how this works but I prefer to ascribe it to basic witchcraft. There are fifty five cards, fifty symbols, and each shares only one? That’s witchcraft.

I know you don’t believe me, but it’s true. The combination of random orientation, location and size short-circuits the pattern recognition in the brain and snips the wires connecting image processing to language expression. It leaves you gesticulating wildly at symbols representing the most basic human concepts. And I mean basic. I mean the things that you don’t believe that you could ever fail to precisely articulate even under stressful conditions.

Do you see the moon on the bottom card? See how it matches the moon in the centre card? Would you paw wildly at the card and yell ‘Banoon’ to indicate it?

Of course you wouldn’t. You’re smart and suave, and never at a loss for words. But I did. Not being able to settle, in haste, on whether it was a banana or a moon I decided to try for both at the same time. I couldn’t wait to arrive at some mental consensus – someone else could beat me at any moment!

See the top card? Do you see the meltcube? Of course you don’t because that’s not a word. I tried to pass it off as one though in a frenzy.

I have a PhD, and I couldn’t remember the term ‘ice cube’. 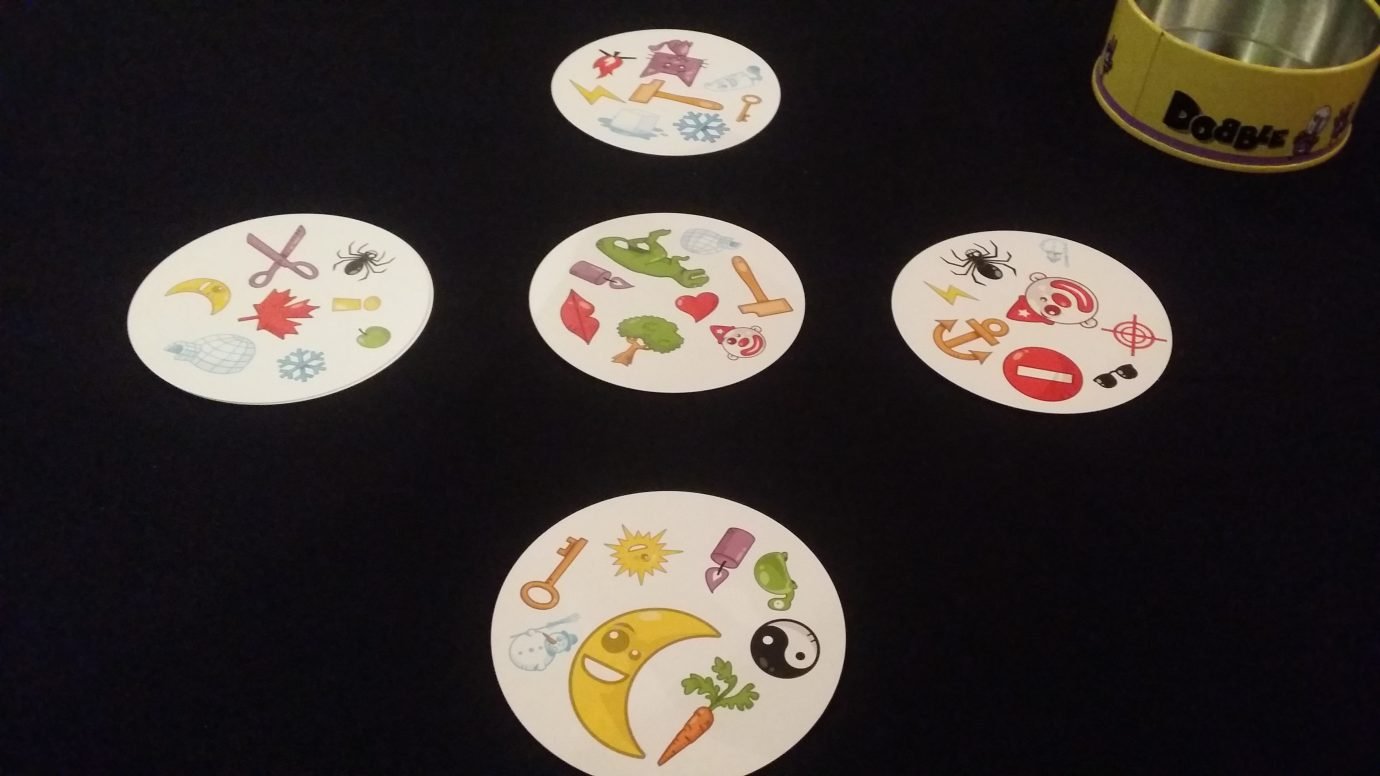 See the turtle at the bottom? Or as Mrs. Meeple called it – ‘the green blobby green thing!’. It didn’t match, but she screamed it anyway. I’ve yelled out ‘Bilk mottle’ and ‘manaple!’ instead of the more traditional ‘milk bottle’ and ‘apple’. I’ve sat pointing frantically at a droplet of water, mouthing animal noises, trying to articulate something that would vaguely approximate the shape I’ve been indicating. I’ve had moments of breath-taking serenity, effortlessly naming shape after shape with nary a pause. I’ve had solid minutes not being able to even remember how basic words work. I’ve ended up substituting a kind of inarticulate longing for real communication, in the hope at least one plaintive combination of syllables will earn me a card. I’ve paired that with frantic, hopeful pawing at what I assume is the correct location. In that respect, it shares a lot of similarities with my sex life during university.

I’ve seen people triumphantly yell ‘Purple cat’ and slap the table so hard it stung, only to find out that the purple cat WAS ON THEIR PREVIOUS CARD. Except they didn’t yell ‘purple cat’. They thought they did. What they yelled was ‘Plurple chat!’, and they were proud to have gotten that close. I’ve yelled out matches that were on the cards other people had. I’ve just started ranting words at random in the undirected hope that one of them matches. I have on occasion entered a state of speaking in tongues.

The genius of Dobble is in this ridiculously simple mechanic, but that genius is elevated by the accelerant of insistent novelty. Every time you make a match, you take the card you just claimed and that’s your new card. Every single success is setting you up for a subsequent failure. You desperately try to parse your card’s unfamiliar symbols against the equally unfamiliar symbols that were revealed. All the while people yell out a pile of things, each of which will interfere with your ability to build a model of what’s going on in the game At the same time you’re trying to roughly guesstimate whether you’re in the lead or behind. Every mini-game is one in which you’re either trying to get rid of all your cards the quickest, or gain the most cards at the end. You don’t know if you’re doing well. You don’t know if you’re doing poorly. You no longer know how to make words. You might never successfully human ever again.

Dobble was one of the games I played recently with a ten year-old visitor to the house. We had been playing for approximately two minutes when the excitement and stress of the experience resulted in him knocking over a glass of Pepsi Max. It sprayed across the entire table, the Dobble cards I had claimed by right of conquest, and a fair proportion of my good self. 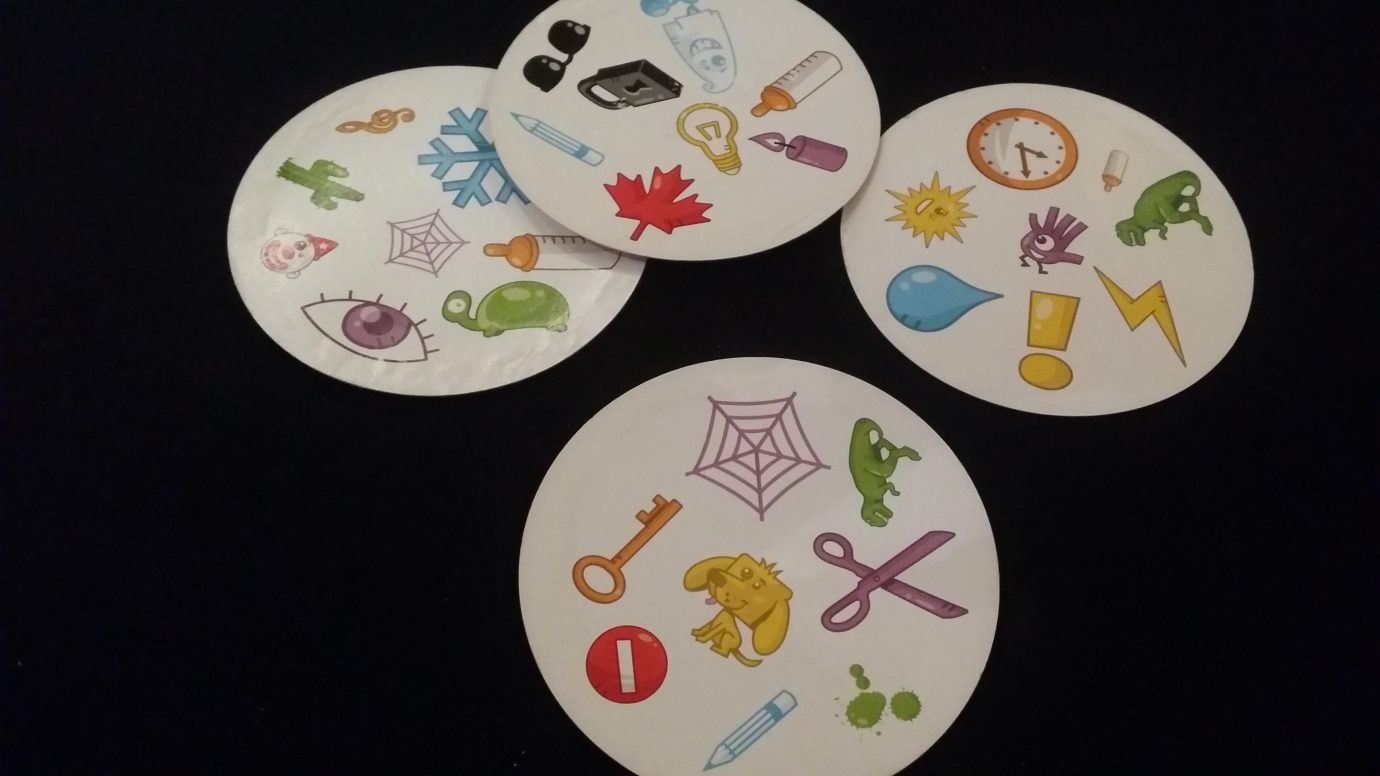 We wiped up the mess, microwaved the soaked cards, and then went right back on playing. That, I think, is perhaps the perfect evidence of the excitement at the core of this dumb, stupid game.

This isn’t a long review, because Dobble isn’t a complicated game. It’s not a game that’s going to deepen over time. It’s not going to become your go-to game for your gaming buddies. It’s going to be an intensely hilarious five minutes that you bring out as a filler, and then put away as soon as everyone has had a go. Those five minutes though are going to be memorable in a way that many games can’t manage with five hours. It’s a game that’s going to see constant, although not intense, use. You’re not going to build a night around it, but you’re going to improve many nights with its occasional application. The shine will likely fade with familiarity, but it’ll gain a new sparkle with every new group you try it out with.

It’s not a great game, but it is a game that facilitates great moments. And it’s as cheap as chips so you should just go and buy it.