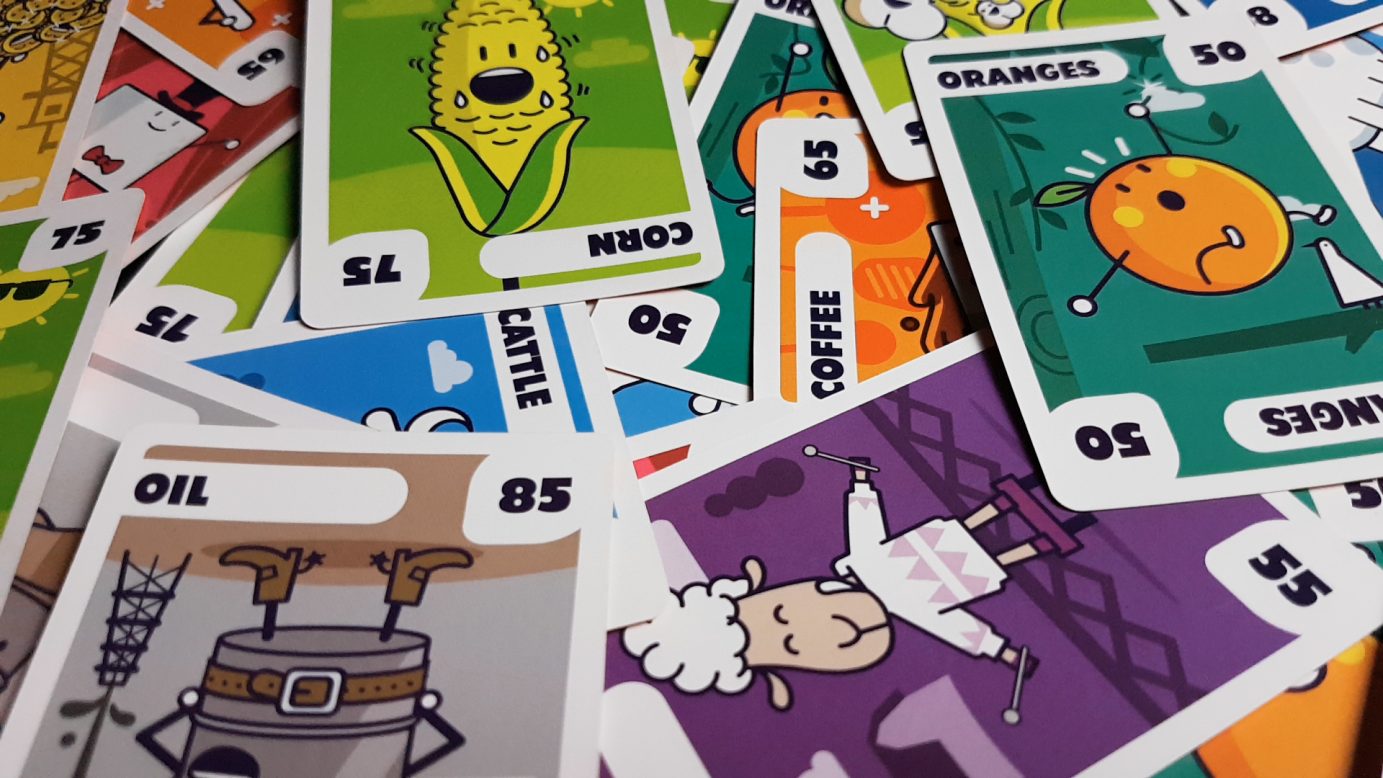 A review copy of Pit was provided by Amazon Vine in exchange for a fair and honest review.

Continuing our occasional series of ‘games from ancient antiquity that still deserve some attention in the modern era’, let’s talk about Pit! This is a game that was first released in 1903. Even now it’s probably the single most efficient engine for taking a game group from quiet contemplation into ‘borderline riot’ with only the start of play acting as the catalyst. It’s a spectacularly simple game, as many from this era are. However, it is also literally the only game I own where banging a provided bell is part of the design and so I’m going to talk about it today.

Try to stop me. The version of Pit you own is going to have an impact on a lot of the presentational elements, but in any version that is worth having you’ll have three things – a set of commodity cards, a pair of bull and bear cards, and a bell that you can hit with your hand to indicate the start or end of trading. Everything else is handled by the straightforward rules, which work as follows:

The trading phase of Pit is moderated two one requirement – you have to trade like numbers of cards at a time, and they must all match. If I have three oranges I want to sell, I yell out ‘Three! Three! Three!’ until someone else wants to trade three of their own cards. I don’t say what I’m trading. They don’t say what they’re trading. The only thing you know in a trade is that every card you get or give will be part of a set because you can’t mix and match. Our offer is only ever based on quantity, but that’s fine. Pit is too frantic to let you do much of anything else. 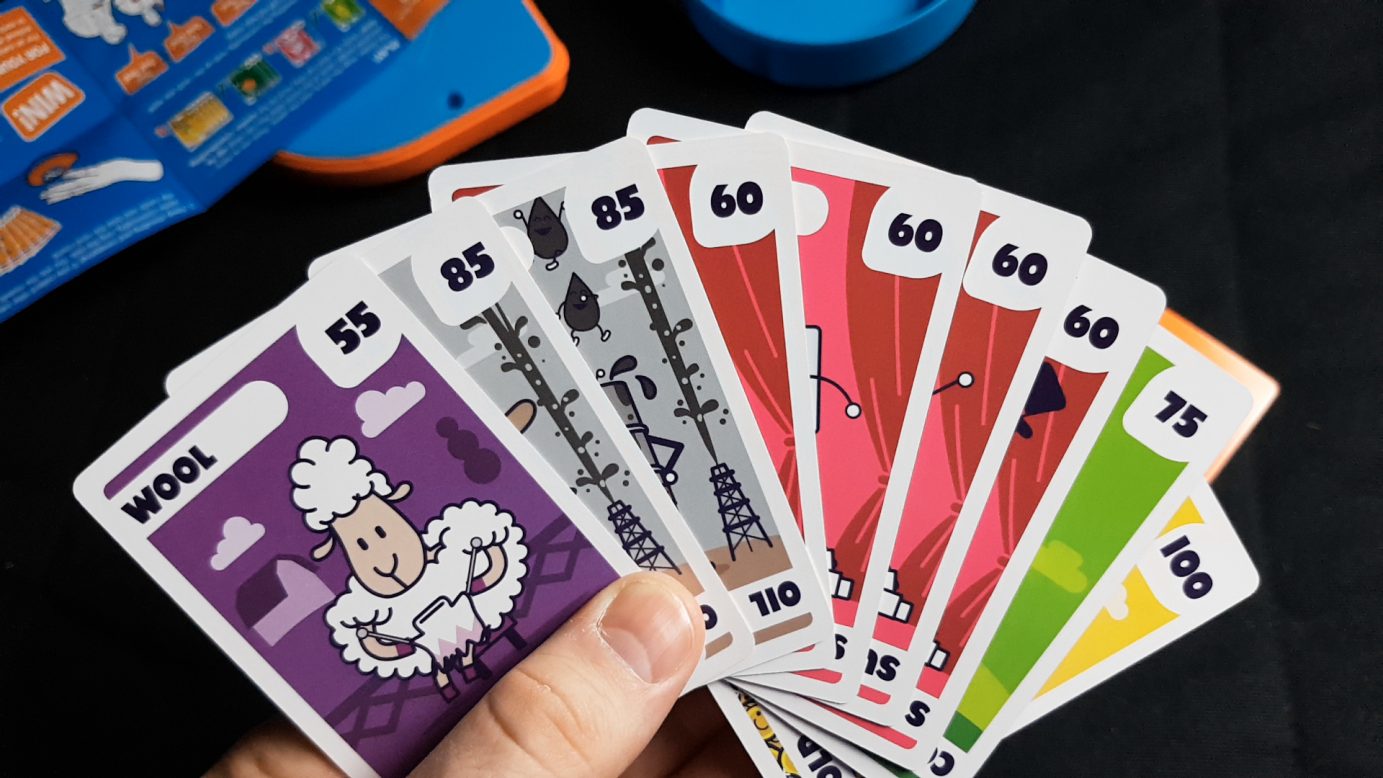 Everyone has the same goal – get a full hand of one single commodity. That’s how you win a round. However there’s no co-ordination here – no, ‘I’m trading three cattle for three sugar’. It’s all unknown trades against an unseen timer. That means that every trade swap you make is the equivalent of buying into a stock market loot box. You don’t know what’s in it, you just know it’s a chance at moving you further to victory.

‘Three!’ you’ll yell, looking to offload corn in the hope you get gold in return. Someone hands you three cards. You hand them three. You roll your eyes because each of you handed an equal set of corn to the other. Not only are you both exactly where you started, you can’t trust each other in future trades because you know you don’t want to buy what they’re selling. ‘Three!’ yells the third player, and you both frantically scrabble to take that trade. You make it only to find a handful of useless wool comes your way as you see them reaching for the bell.

It’s incredibly frantic and it gets more excitingly frantic the more players there are. At about four players there’s enough noise to be interesting but not enough dynamism to be hugely exciting. At six and more there is so much trading and counter-trading that your game table begins to resemble the closing scenes of Trading Places but somehow manages to be even more confusing.

In the advanced game, players get points based on the value of their commodities and this adds an interesting aspect of game theory to play. Do you bank on gold, because it’s worth the most…. Or do you go for oranges because nobody else will be competing for those? Do you hope that people will hang on to the higher value commodities, or are they all going to be equally suspicious about polluting the common ground? Are you all comically going to be trading away gold for gravel because you have decided as a group and without coordination that it’s the sensible strategy? It can happen, if people are trying to be strategic.

To be honest though, there isn’t a lot of that. Adding to the anarchy are the bull and bear cards. The bull is a wildcard, and the bear is a penalty card. They can get traded along with any set and it adds a way to poison a deal or possibly sink a seemingly dominant player. You might think that you’d never want to trade a bull away, but it only works as a wildcard if you’re the one to ring the bell after acquiring a full set. Otherwise it’s a penalty that gets applied to your running total.

There’s a lot to like in Pit’s simple design. It is instantly intuitive, and it can be played competently by people that have no knowledge or interest of stock trading. It’s chaotic enough to inject adrenaline into a room like a powerful dose of amphetamines. Importantly it gives you just enough sense of control to make you feel like you’re making decisions but not so much that you’re ever really the one setting the trajectory of your fate. The best you can do really is hold on to the commodity that you want to claim and then try to work out who will be willing to get rid of the same. It’s not a case of carefully assessing action and consequence. More a case of ‘Michael gave me oil in the last trade so he’s clearly not trying to build that hand’. If you sat down with a pen and paper you’d almost certainly be able to deduce, from a handful of trades, who was hoarding what. The fact you don’t have time for that is what keeps the game feeling fresh. When the bell rings to indicate the end of trading you’ll likely feel like you just got jolted out of an unusually lucid fever dream.

This is a game that works and works well.  What’s interesting here is not so much that it’s an enjoyable experience, because it is. It’s the con-trick being performed to ensure that’s the case.

The thing is, there isn’t much going on in a game of Pit. Hands are built not so much by skill and acumen (although it can be a factor) but through sheer inevitability. Since you trade based on sets they tend to aggregate. If I have five of one set and four of another, it’s inevitable that a trade of four with another player is going to either complete my set or tell me where I need to trade what I was just handed. Pit progresses through a visceral process of elimination – not of credible candidates but rather of intuitive possibilities. Pit is a perversion of the laws of entropy – it trends towards order over time and as such success for someone is inevitable and it might not even be linked to their own actions.

I think of Monopoly as a game of about 95% chance. If it were a lottery it would be one where certain shops sold preferentially weighted tickets. Scrabble is about 25% luck – skill, more often than not, will determine the winner although it would be unwise to discount the role that tile draws play in success.

Pit falls somewhere in the middle for me – maybe a game that is 60% chance and 40% skill and that is actually something of a magical blend for a game of this type. It gives people that want to win room to do so – there are tricks and techniques within Pit that permit people to demonstrate mastery within its intractable uncertainty space. However, it also gives people that just want to have fun an almost frictionless on-ramp.

Trading games like Chinatown and Lords of Vegas are built upon the idea of letting people set their own parameters for value and then largely taking a hands off approach from that point on. An economical system is intimidating, but everyone has an in-built switch that tells them when someone is trying to screw them over. Nonetheless, the learning curve of these systems can be intimidating when all you want is some simple excitement of an evening.

Pit discards all of this. It’s like the roll and move version of heavier trading games. It’s not so much an economical negotiation as it is a kind of mediated primal scream. This is the con-trick I mentioned earlier – sometimes the joy we get out of an activity is more about its verisimilitude than it is about its careful design. Sometimes fun comes about as a form of sympathetic magic – and it’s fun to yell incomprehensible numbers at a trading floor made up of your baffled friends. It’s fun to hit a bell and yell ‘WINNER WINNER CHICKEN DINNER’. Pit is fun even if it’s not actually a particularly well-designed game. I’d be inclined to say it’s less a boardgame and more like a theatre improv exercise. Less like a strategic experience and more like a LARP with menaces.

Sometimes a game is more than the sum of its parts, and I think that’s what you get with Pit. It’s not really promising you much of a game. It’s promising you a reason you can do something cathartic for a while in circumstances that normally wouldn’t fly. It’s basically an excuse in a box and lord knows we can all do with that on occasion.

A review copy of Pit was provided by Amazon Vine in exchange for a fair and honest review.