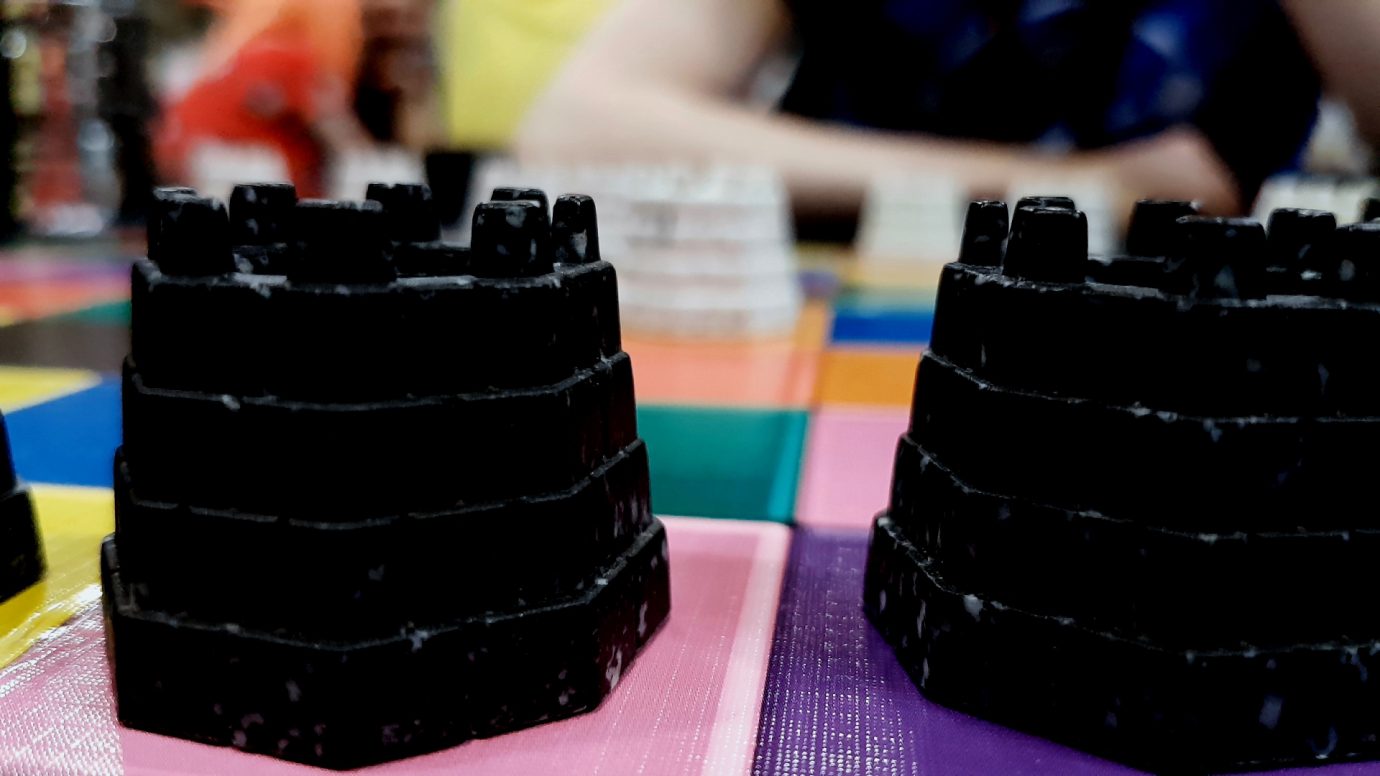 Kamisado is the game you’d get if a military R&D department cross-bred Chess and Curling with the intention of weaponising the Stroop effect. It’s a marvelously simple game of moving pieces with the sole intention of getting one of your chunky ‘dragon towers’ onto your opponent’s front lawn. You pick a colour and you move the piece ‘queen style’ towards your opponent. Always towards. No retreat, baby. No surrender. The pieces can’t capture anyone, they can only move. Lines of attack simply don’t matter here. This isn’t a game about sending troops crashing into the front-line of your enemy with the intention of leaving them vitally disadvantaged. It’s not about motion – It’s what happens when you stop moving that makes the game interesting… 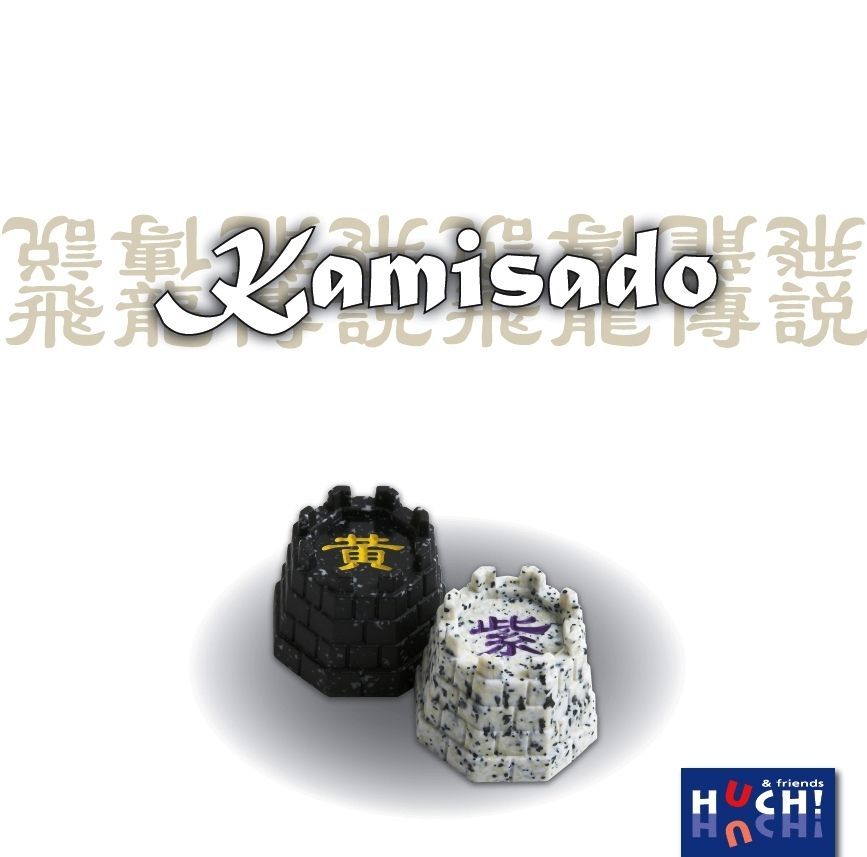 This was one of the games we played at UKGE 2018 and as such I don’t actually have my own copy of it. As you can probably tell from the rating it falls into that ‘good not great’ category that means I won’t turn down a session but it’s unlikely to dislodge anything already on my shelves. It’s all built around one key hook – the only player who ever decides which of their pieces to move is the first. Every single move after that, it’s your opponent that decides the opportunities they are going to present you. You move the piece they made you move, and whatever colour of square on which stop is the colour of the piece they need to move. It’s like dancing in its own quiet way – your opponent goes where you lead, and then you follow where they lead in turn. You waltz around each other until one of you finally manages to maneuver a piece onto the far edge of the board.

Is that like dancing? I don’t dance. I disapprove of public displays of synchronized movement. 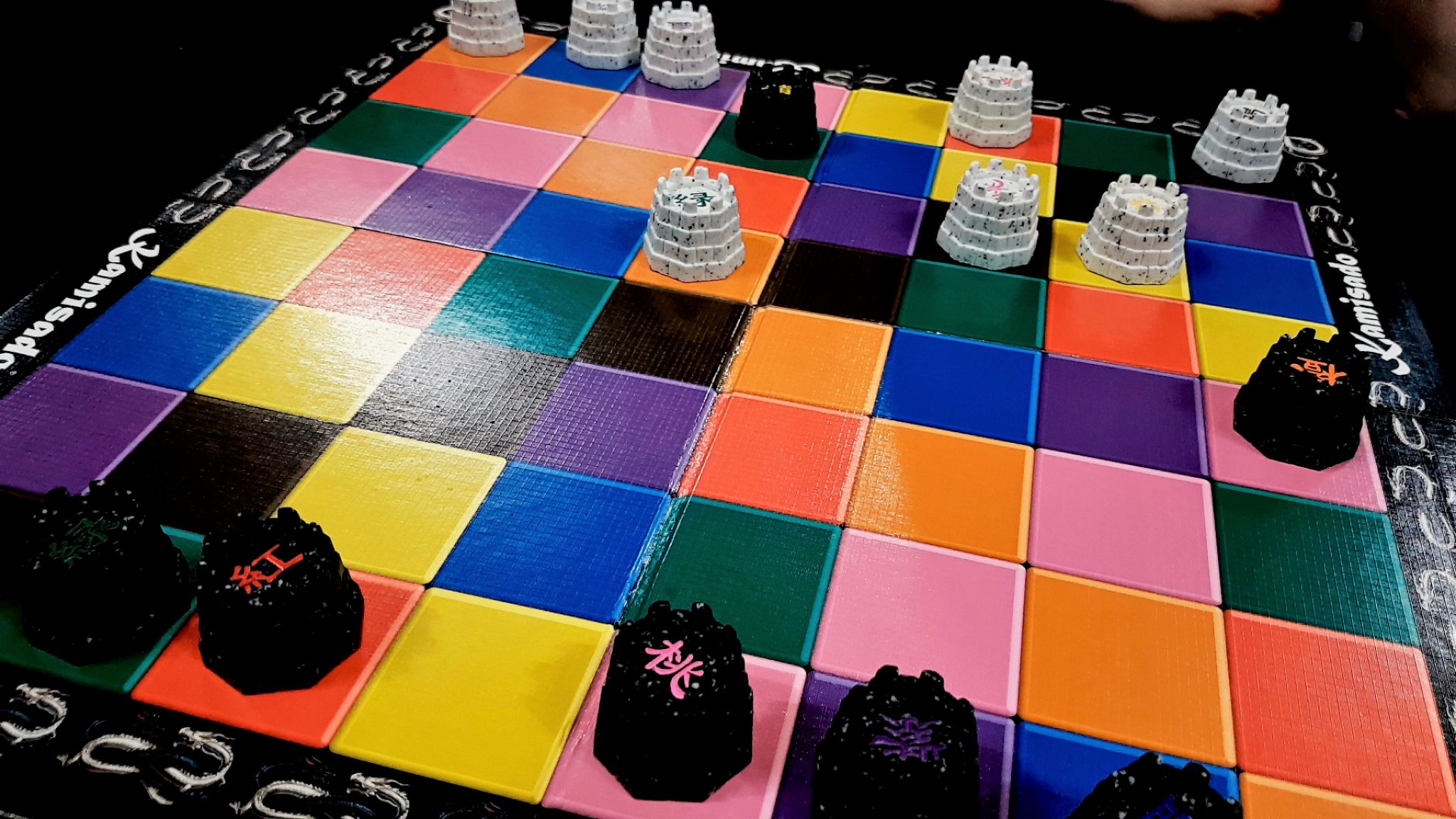 The neat thing here really is the sense of fluidity and rhythm imparted by this. You can’t choose the direction from which the next attack will come – all you can do is pick its origin. You spend a lot of time being worried in Kamisado, not looking for the attack you open up with your move. Instead you worry about one you might be forced into opening up two or three moves down the line. They say Chess grand-masters have to think a dozen or so moves ahead to play a world class match. The design of Kamisado powerfully echoes this even if it doesn’t ask quite so much of anyone sitting down to play. It’s instantly understandable even if mastery may lie some way off in the distance.

Essentially what you get in a turn of Kamisado is a powerful sense of technicolour paranoia. Consider the game state shown below – the white player has just moved their yellow piece to the orange tile. That means your next move is with the orange piece you currently have sitting on pink. That lets you slingshot that piece in a graceful diagonal right into your opponent’s living room. Boom – you lose the round that quickly. 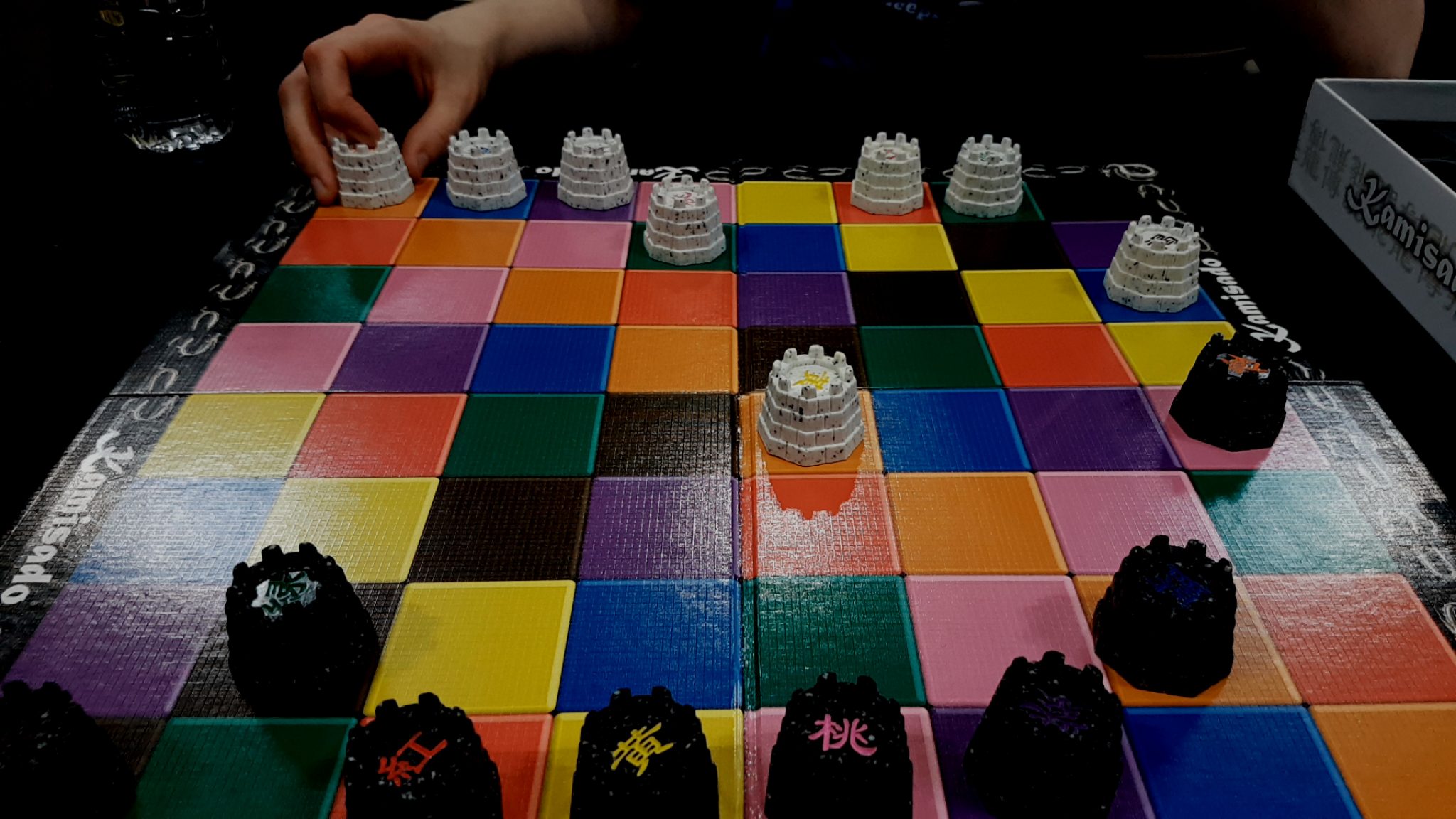 The trick here is not to avoid immediate calamity – that’s relatively easy. White just needs to avoid stopping on an orange tile and it’ll be fine. Here though you need to plan not for your next move but the move you think your opponent will enable. Your pieces here are dams in a river of endless possibilities, and you want to make sure the only choices your opponent can make are to your advantage. Maybe it would be be amazing for you if you could force your opponent to land on a yellow square. Maybe that’d let you sweep bnas their massed guards and plant your flag of conquest. How could you make that happen, though? What is the magic combination of colours and positions that turns this feel-good disco into murder on the dance floor?

You can play this as a sudden death duel, but the game gets a little more interesting when you extend it into a series of rounds within a match. When that happens, a win counts as a point towards victory but it also promotes the piece that scored it. That piece becomes a ‘sumo’ and gains the ability to push an enemy’s pieces back one space if necessary. The towers become battering rams, and that gives you a certain degree of aggressive latitude in organising the game state in a way that is most harmonious to your overall goals.

All of this makes for a game that’s satisfying to play because even in your loss you had a pivotal role your downfall. There is an emotional rush that comes from scoring a point, and it’s like a simultaneous climax of neurological chemicals – the rush of success for the winner, and the epiphany of despair for the loser. Except in the tightest games, every time you concede a point in Kamisado it feels like the most preventable of own goals. You don’t really ever lose a game of Kamisado – you concede it through forced or unforced errors. The dawning realization of what you have done ensures a steady stream of endorphins that you wouldn’t often expect from such an abstract game. 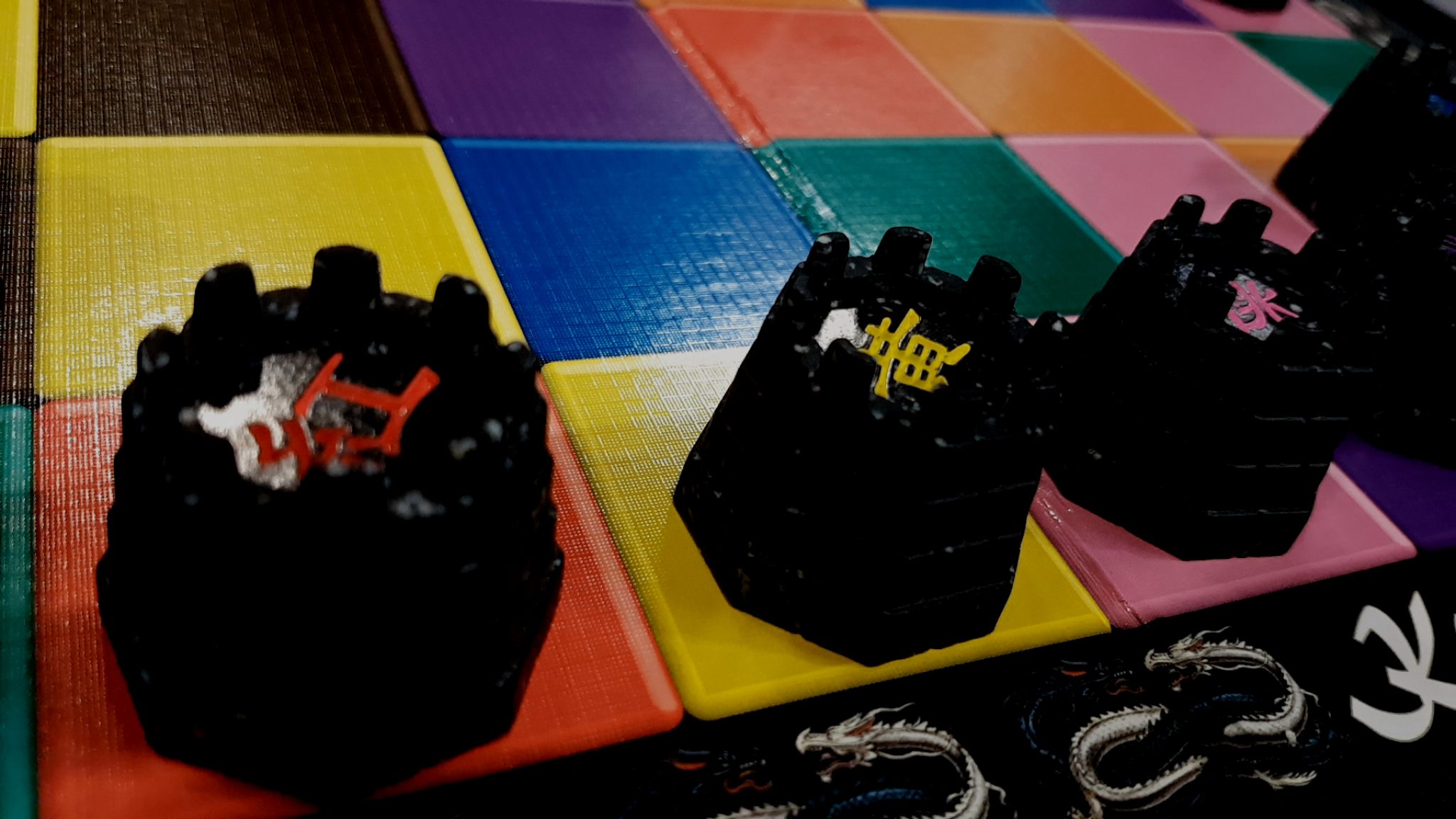 In many respects Kamisado shares a certain portion of its DNA with the excitingly energetic Onitama. Both of these titles are about your primary engagement with the game mechanisms being bound up in a system of reaction. They take simple, basic mechanisms and imbue them with the intimacy of being bound up in the context of your opponent. These games are more like an embrace than a battle. They remove the cold logical abstraction of Chess and Hive and replace it with something a touch more intellectually sensual. Insofar as game mechanisms can be considered to be erotic, I think you can say that of Kamisado. It’s the abstract game equivalent of dancing a Tango.

But still, the problem with systems like this is that there’s only so far you can take them without losing some of the magic. In order for your fate to feel encapsulated in that of your opponent, the start and end points of the interaction must be transparent. They can’t be too complicated, or the outcome feels erratic. They can’t be surprising, because then the output feels disconnected from the inputs. That has a severely constraining impact on how interesting they can be in the long term.

People have played Chess for a long time. At least since the fifties. The game though that the world class players experience is not the same as the one the rest of us do. It becomes about openings and fixed positions and being able to navigate and master a vast and complicated body of knowledge in complicated and difficult circumstances. There have been world championship matches of Kamisado that have been running since 2011, and that’s a pretty good sign that there’s a lot of deep strategic merit here. The thing is, I suspect that most of you reading this are never going to make the effort to become so good at Kamisado that the nature of the whole thing changes. You’re going to play it occasionally when the mood strikes you, and then you’re going to put it away for a while until the mood strikes you again. A game like Onitama or Santorini can survive and thrive in those kind of circumstances because of the ever changing move-set – while the experience of play is fundamentally the same every time, the different options available to you ensure a constant stream of novelty that keeps it from feeling samey, Kamisado doesn’t have that. It has the same core as a game of Hive or Chess, which is that it unlocks its true qualities once you have initiated yourself into the ever-shifting complexities that come with deep familiarity. It’s a deferred kind of value that rewards those that are willing to study it, but it also means that it’s a long time before you really get the most out of its design. 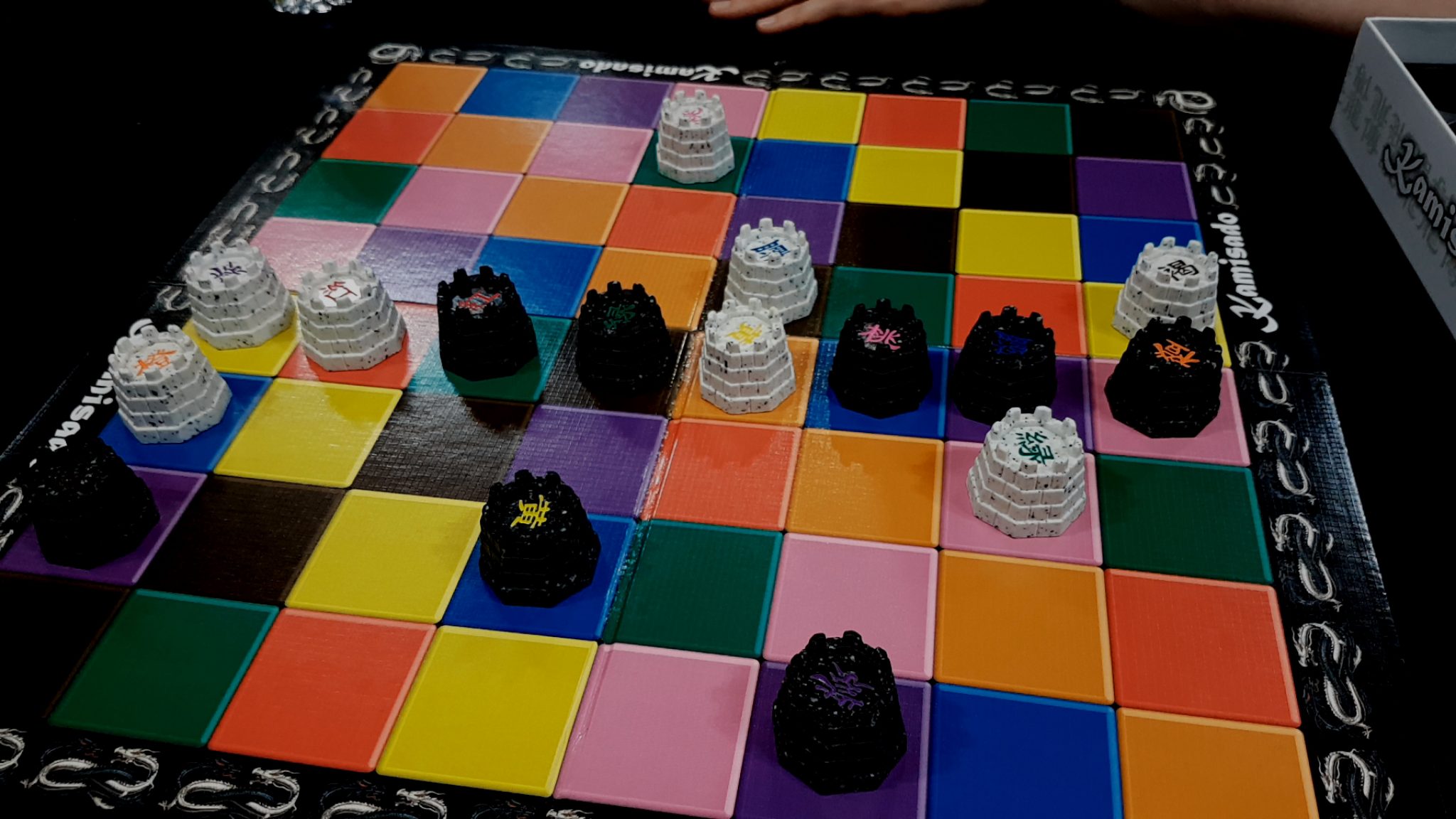 None of that is to say it isn’t a good game out of the box, because it is – it’s fun and interesting. It’s weirdly and pleasingly consensual in its model of competition. It’s also a game that has an unfortunate dip in its enjoyment curve when the fun derived from its mechanisms doesn’t neatly overlap with the satisfaction that will likely come from its mastery. I’d rather play Chess over Hive. I’d rather play Kamisado over Chess. Unfortunately I’d also rather play Onitama over Kamisado in almost ever situation I could imagine outside of the most ultra-comptetitive.