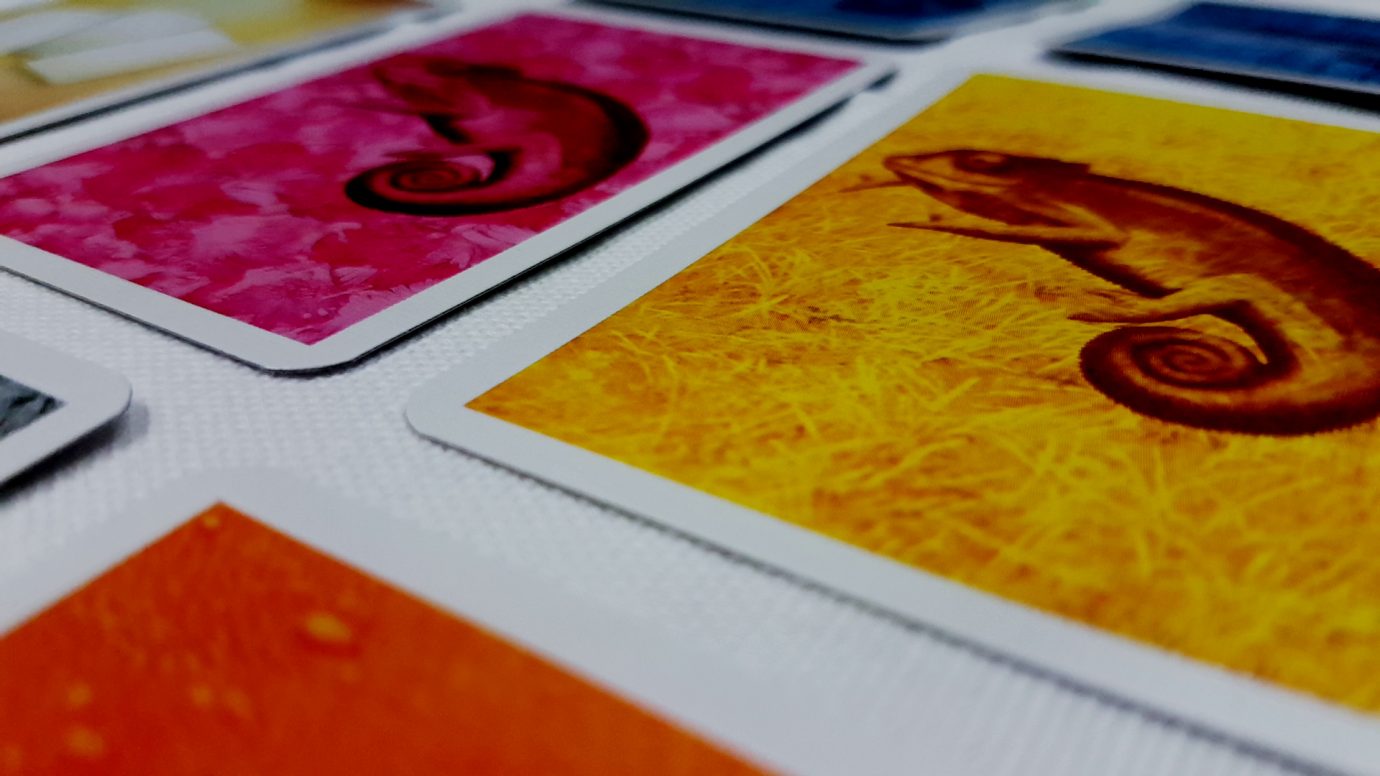 This will be a relatively brief review. 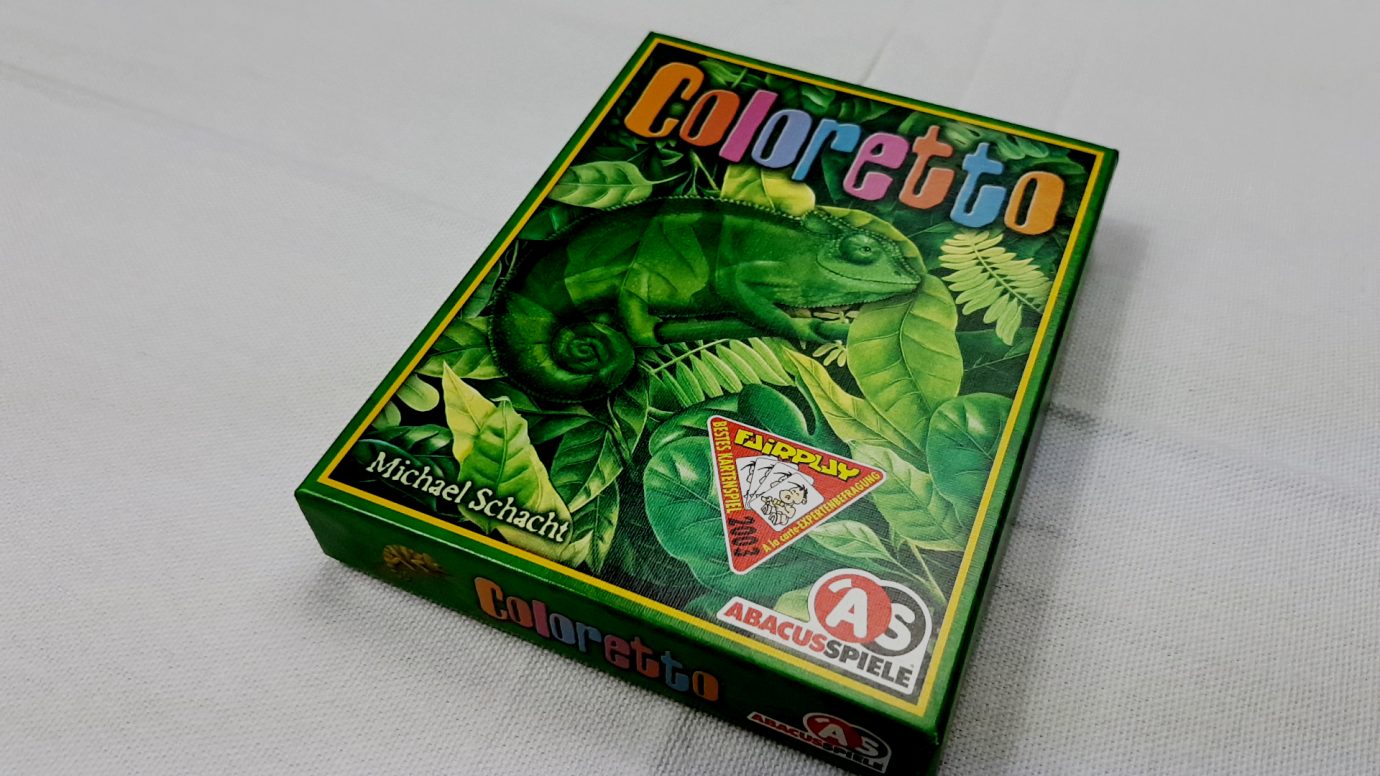 I guess it’s a chameleon because… colours? I don’t really know.

It plays this like. You and each of the other players in the game are dealt out a coloured card. Then, in order, you each take a card from the deck and choose a row in which to place it. There are a number of rows equal to the number of players, and no row can contain more than three cards at any one time. 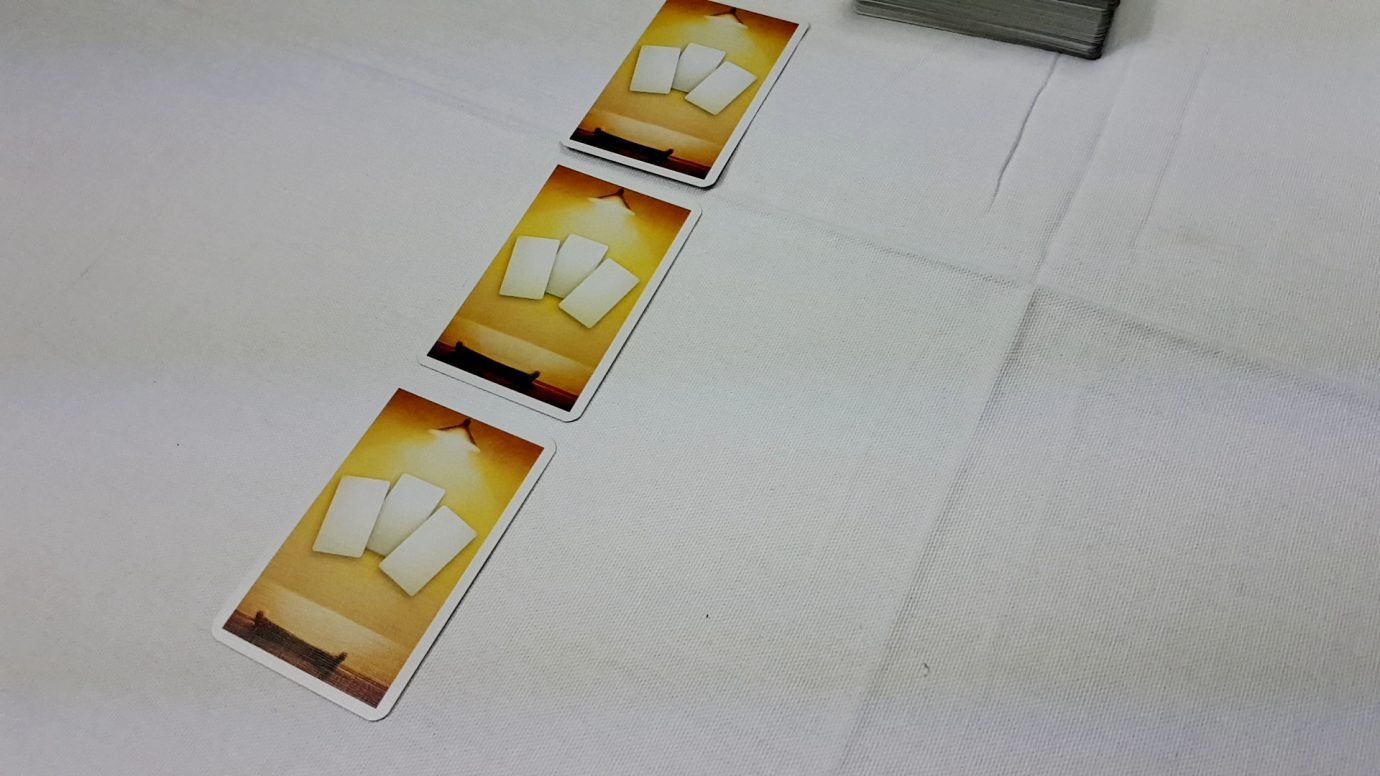 The battleground in preparation

At any point you can recuse yourself from the rest of the round by claiming all the cards in a particular row. Play then skips over you until everyone else has claimed a row. When that happens all the row marker cards are returned and everyone participates once again in the next round. Play continues in this way until you draw the ‘final round’ card. 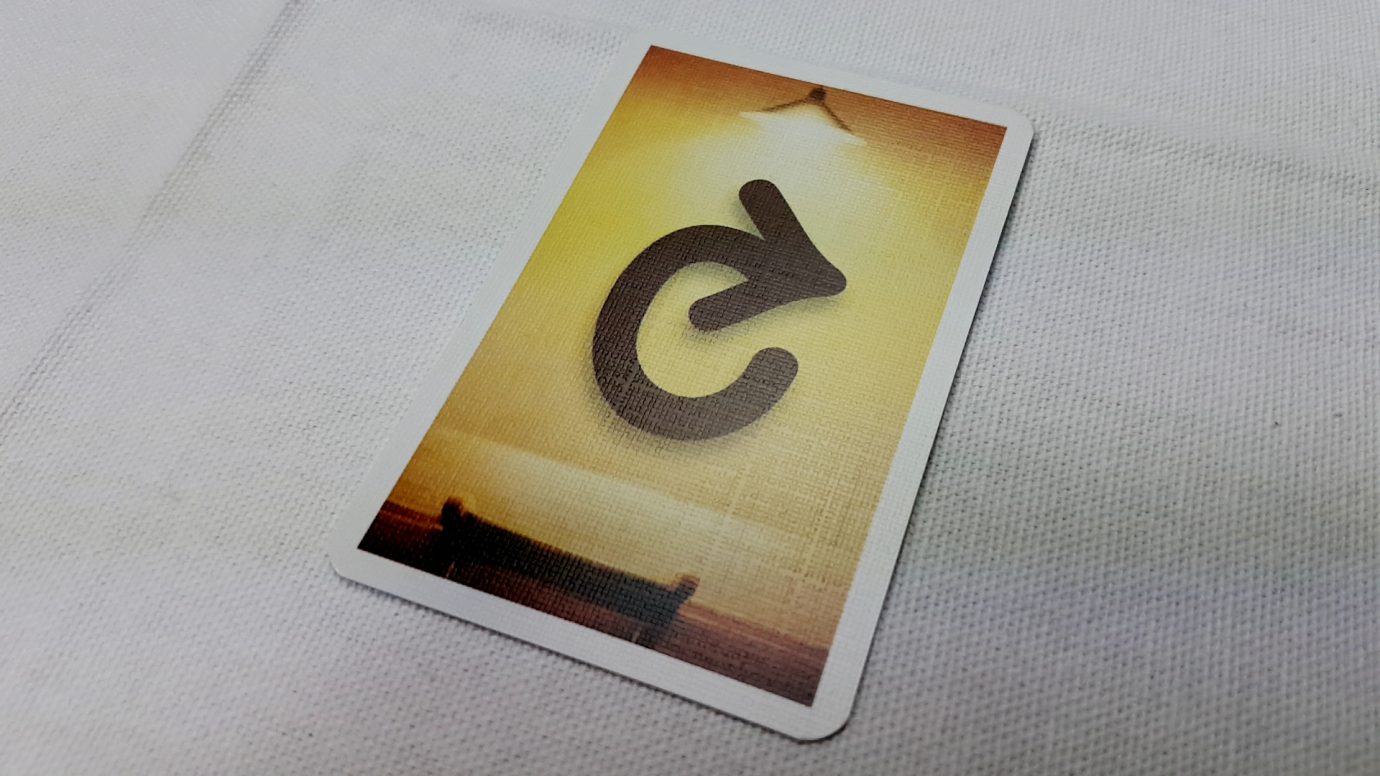 And now, the end is year…

Cards played to a row are either going to either be a colour, a number, or a wildcard. At its heart Coloretto is a simple set collection game where you’re looking to have the biggest collection of cards in particular colours. Sets become increasingly more valuable as they grow in size, so you’re often going to feel the pull to bow out of a round early just so you can claim a card that is especially valuable to your end game score. You get scored for every set and so you’ll want to make sure they’re well-constructed – big sets of lovely, vibrant colours. 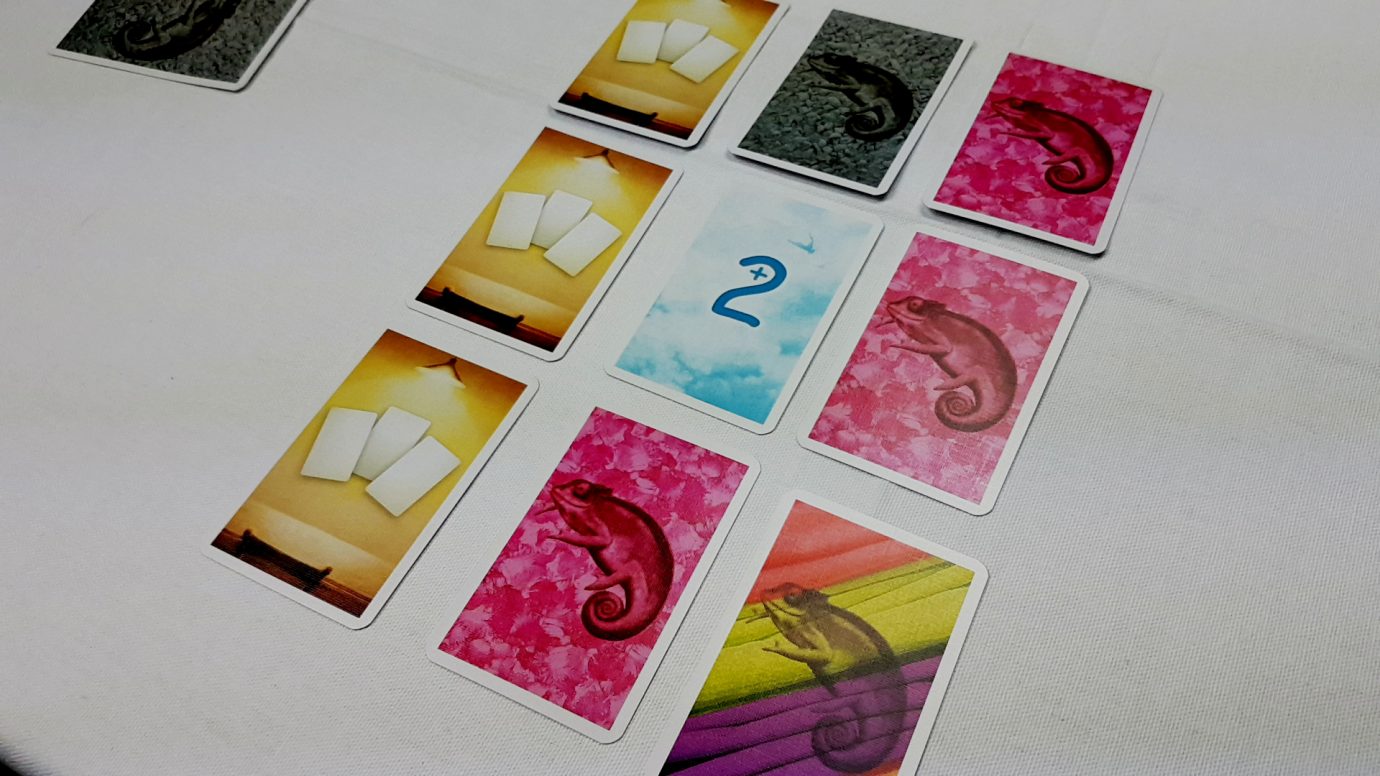 A series of poison pills

The quirk in the design of Coloretto is that while you get scored for every set, you don’t get scored positively for all of them. You pick three sets (almost certainly your largest ones) to contribute positively to your score. The others all count negatively – they get subtracted from your final tally. As such, you want to aim for three huge sets and ideally nothing else. That’s going to be tricky though because your opponents will be loathe to give you a single card of your best set unless they get to poison the well with two of a set you won’t be scoring positively. The problem for them is that you choose your scoring sets at the end of the game. They can’t just continually pass poor cards of a particular colour your way. At a pivot point, those poor cards might well become the best set you’ll have available. 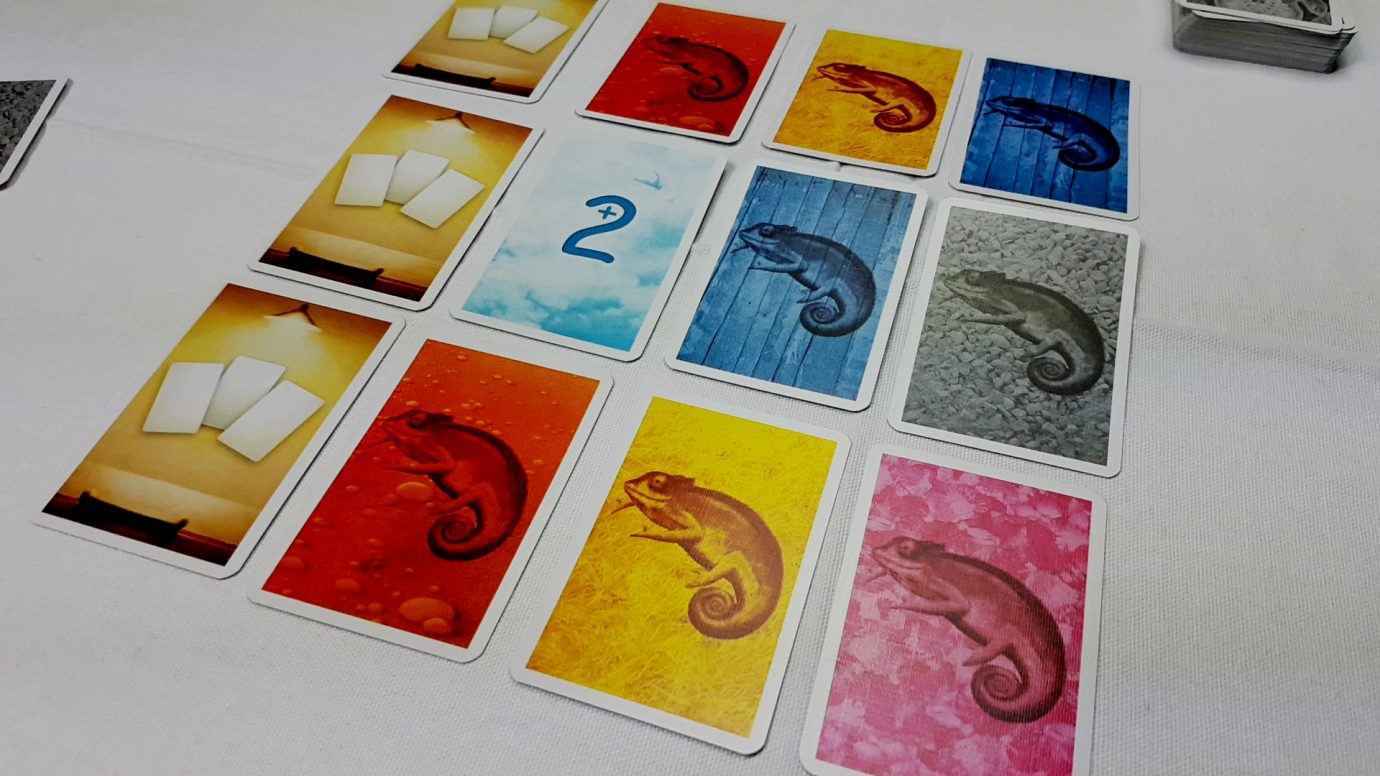 Self inflicted wounds in every row

Coloretto feels a bit like an aberration for this blog – it plays like an old-fashioned game you’d knock together from a deck of standard playing cards. It’s like reviewing Hearts, or Rummy. Its core system is quirky and relatively enjoyable. It’s quick, clean, knockabout fun to just gather up sets while attempting to screw up the scoring of your opponents.

The problem is that this core system is also incredibly ephemeral – it’s a lot less impactful on play than you might think. It initially seems like you’re navigating through a mess of an ever shifting marketplace of colours. That’s an illusion – in the end all your machinations accomplish little more than docking a few points off a player’s final tally.

You’re always doing a top draw, so your ability to actually strategize is minimal. If you pull out a red card and play it down, the next player can decide ‘Nope, I’m having that’ and eschew any risk that the row will become less valuable as time goes by. Sure, they’ll also lose out on the chance it becomes more valuable but that’s not nearly as important. Nobody else in the game is willingly going to add two red cards into a single row if they know someone else is collecting them. It might happen when someone makes a mistake, but that’s not satisfying. It might happen because they had no choice, and that’s not satisfying either. As such, while players can attempt to poison the well they also can’t stop you drinking before the vial is open. You’ve got very little incentive to wait for them to pour the fizzing drops of night-black liquid into the waters. The value of a row to you is going to trend very much towards being at its highest value now as opposed to at some point in the future. When it comes to deciding on which colours to bet your fortunes there’s some skill involved because it’s going to be dependent on what’s still left to come out of the deck. In the end though everything you do in Coloretto is just a function of how well you can handle a straightforward task of calculating probability and ascertaining uncertain value. The worst thing is that you can never really take any responsibility for what happens. ‘If I place the red here it will give the next player six net points. If I place it there, it will give the player after them two net points. My relative standing in the game is mathematically optimal if I choose the latter action’. That’s all you become – a colour counting abacus that could be replaced wholesale by a lazily programmed Alexa skill. 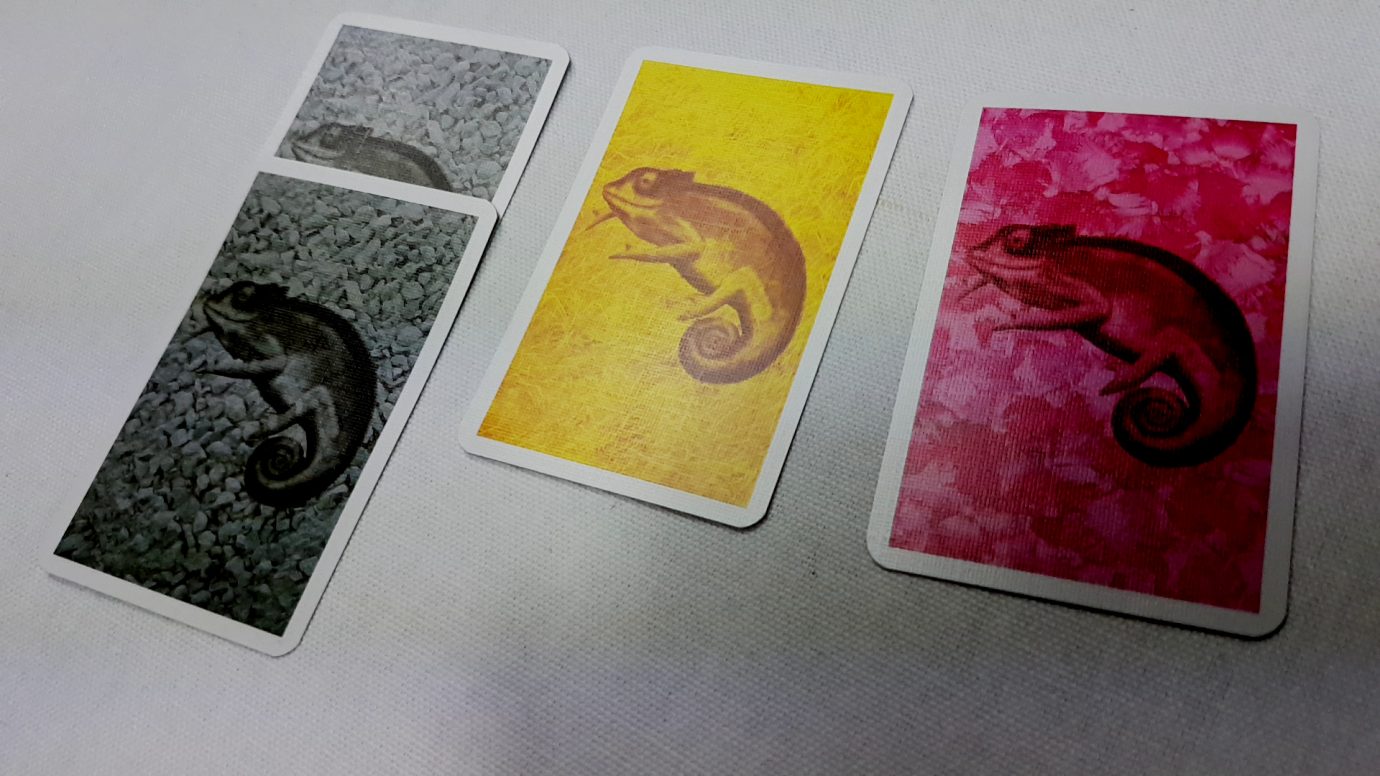 My sets in construction

This is why so few of your decisions feel impactful. Even if you derive satisfaction from the core systems of card play nothing you do matters much – scoring is balanced in both directions, and the result of that is that every action is biased towards positive. You won’t pick cards, if you can help it, that do you more harm than good. One strong set in Coloretto might subsidise your point tally for every negative set. A whopping penalty associated with the number of additional sets you’d racked up would be good, as would each penalty card being worth correspondingly more than its equivalent positive card. Coloretto really needs some bite to turn the negative scoring system into something more than a casual act of passive accounting. A good game makes you stress and strain over the decisions you make – consider Hanamikoji as a beautiful example of that. Coloretto in comparison has all the heart and soul of a high-school arithmetic puzzle.

That’s really the problem that suffuses every atom of Coloretto’s being. It seems profoundly reductive to say ‘Every action you take will be a calculation of minimising penalties while maximising score’ because in the end that’s what every game is about. Coloretto suffers from this because the puzzle is so transparent. It becomes a little more interesting when you start considering that puzzle from the perspective of every other player but again – it’s also transparent when you put yourself into their shoes. The only hidden information is the order of cards in the draw deck and simple probability turns that into what is essentially a die roll with shifting faces. 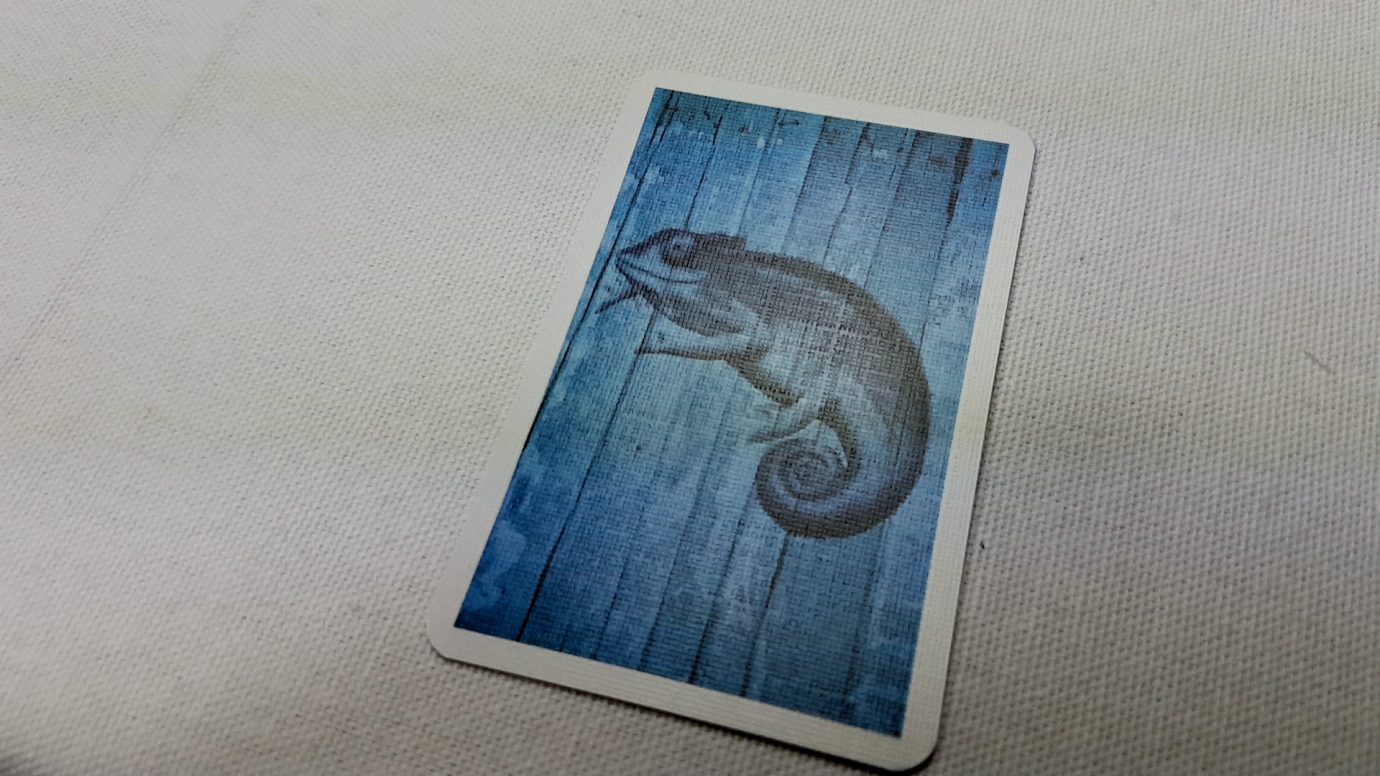 Blue reptiles. Bluer than reptiles were her eyes

Coloretto is likable despite having almost no weight to its systems. It’s light and breezy enough to keep you entertained in small, measured bursts. It might be a good palate cleanser after more nourishing fare, or a reasonable amuse-bouche to set expectations for a game’s night. There are though better games for both those scenarios. It’s not that Coloretto doesn’t come with its own payload of unprepossessing fun – it’s just that I feel that a well-structured flow-chart could play it as well as I can. When playing Coloretto I feel like I’m just a meat-implementation of a probability evaluation algorithm. I want games that make me feel like my basic humanity is an important part of the fun I’m supposed to be having. That’s unfortunately not something I can reasonably say of this particular game.

← Photosynthesis (2017) – Accessibility Teardown
The Universal Inaccessibility in Board Games →