A review copy of It’s All A Game was provided by Atlantic Books in exchange for a fair and honest review.

I didn’t expect to like It’s All A Game as much as I did, but that might be partly because of a change in tagline between the first and second edition. The first edition proclaims itself to be the ‘history of board games from Monopoly to Settlers of Catan’, whereas the second sets out to be ‘a short history of board games’. I have strong prejudices about what such a history is likely to involve and an early peek at the index doesn’t disabuse me of them. There’s heavy focus on Monopoly, Cluedo, Trivial Pursuits and all the family favourites we know and have played to death in the cold of some grim Christmas morning. I’ll admit it was with a somewhat heavy heart that I picked up the book and started reading. I expected this history to end approximately a million years ago, somewhere round about the 1980s.

I was very pleasantly surprised.

It’s not quite true to say I couldn’t put the book down, but it’s definitely true to say I made special effort to pick it up again every time I did. That doesn’t always happen. The last physical paper book I read took me about six months. I’d almost always turn to my conveniently located Kindle app rather than find where the hell I last left the book. As I expected, It’s All A Game doesn’t cover much new territory for a board game fan. However, Tristan Donovan is a very engaging writer and he manages to make even a return to familiar ground worth the journey. The writing is charming and informal, and the subject matter is pacey and punchy while still being insightfully informative.

Chapters are brisk, self-contained essays on points of particular interest in the evolution of the hobby. The best thing about them though is that they almost always focus on human stories and dramas – of the business risks and professional challenges faced by game designers pitching new titles into a sceptical marketplace. It’s not that we don’t see the evolution of rules and design, but rather that’s always contextualised within tales that are intensely personal. Of a necessity, technical detail tends to be consequentially under-emphasised. It’s not going to be the kind of book you pick up if you want to understand the finer points of the legal battles associated with Monopoly for example. I would recommend Mary Pilon’s marvellous the Monopolists for that. This is a different kind of book – a popular history of a popular pastime. If Brian Cox played Pictionary, this is the book he might have written.

It’s All A Game documents the humanity at the core of play while also situating each game clearly in the often incomprehensible social context of their times. The chapters on the evolution of Go, Chess and Backgammon for example never forget that in the end that the story of gaming is the story of gamers, and we can be a fickle lot. The best parts of the book show that games and society reflect each other. Not for naught is the phrase ‘Do not pass Go’ part of the cultural lexicon of our lives. It’s not a coincidence that playing Monopoly feels like an aspiration when the dream of home ownership is increasingly unrelatable. Civilization’s relationship with play has always been fraught and malleable. The importance of gaming tends to ebb and flow with the leisure activities our societies permit and endorse. Games are important because they’re a lens through which we perceive our own history and humanity. 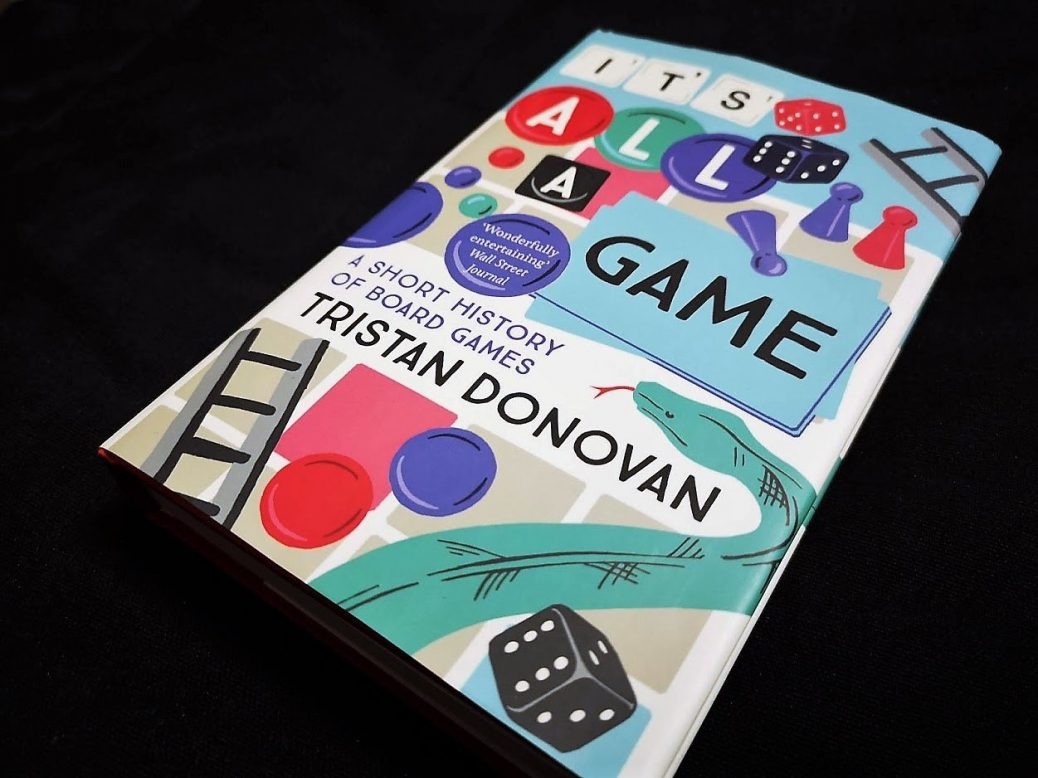 It’s All A Game does a good job of exploring this complicated interplay. A lot of the stories in here are to be found in the interfaces between shifting societal trends. Particularly interesting is how Scruples reflected the occasionally regressive moral norms of its generation, and how Twister faced a hard-time when pitched to department stores. It seems ludicrous now but it was perceived to gamify teens rubbing up against each other and as such was unforgivably licentious in a more sexually repressed time and place. Clean mind, clean game. Dirty mind, dirty game.

It seems somewhat unfair that the main criticisms I’m going to levy at the book are almost entirely nullified by the proclaimed scope of the work. If you’re visiting this blog though you’re almost certainly a hobbyist gamer. You need to know if the book is for you. I’d say ‘yeeeeesssssssssss’ as I suck air in through my teeth in the style of a plumber delivering the expensive news about your combi-boiler.

Yes, I would recommend this book to you but I think you’re almost certainly going to come away from it feeling a little disappointed. Modern titles such as Catan, Pandemic, Carcassonne and Ticket to Ride are here but they’re confined to the last two chapters. Their treatment is borderline cursory. While we get a full chapter that goes into the checkered life of the Checkered Game of Life, most of the modern hobbyist games are name-checked at best. There’s a little section on how Pandemic drew inspiration from SARS, and how Catan made its way from Germany to America and beyond. No modern title gets anything approaching a chapter to itself, and that’s a shame. Sure, these games aren’t quite ‘historical’ but we are living through a historic time for board games. Perhaps we’ll see this deficiency addressed in a third, fourth and fifth edition – when the passage of time is as much an ally to the cause as the perception of its enthusiasts. For now though if you’re not keen to read about the past there’s not much in here that helps illuminate the present and even less that looks to the future.

I also think the book would have been noticeably stronger had it drawn from a less predictable ludography of titles. If I pitched the book premise to the average person on the street I bet they’d come up with exactly the same list of chapters within an acceptable margin of error. There’s a lot of good stuff in here but there’s also a massive chunk of the book that has nothing new to say. For example, the role of the Landlord’s Game in the development of Monopoly is a story I’m not sure needed to be told again. The role of board games as escape kits in World War Two – I suspect anyone moved to read a history of board games is already passingly familiar with the tale. Even if constrained to the relatively workaday catalogue of mainstream games, there are other stories I would have liked to have seen explored. I would have enjoyed being surprised more often than I was.

It’s All A Game is engagingly written, comprehensively researched, and full of nuggets of genuine insight. Even if the choice of focus leaves you cold, Donovan writes with sufficient warmth and wit that it will melt away your reservations. It’s a great book and I enjoyed it an awful lot more than I expected from the table of contents.

A review copy of It’s All A Game was provided by Atlantic Books in exchange for a fair and honest review.