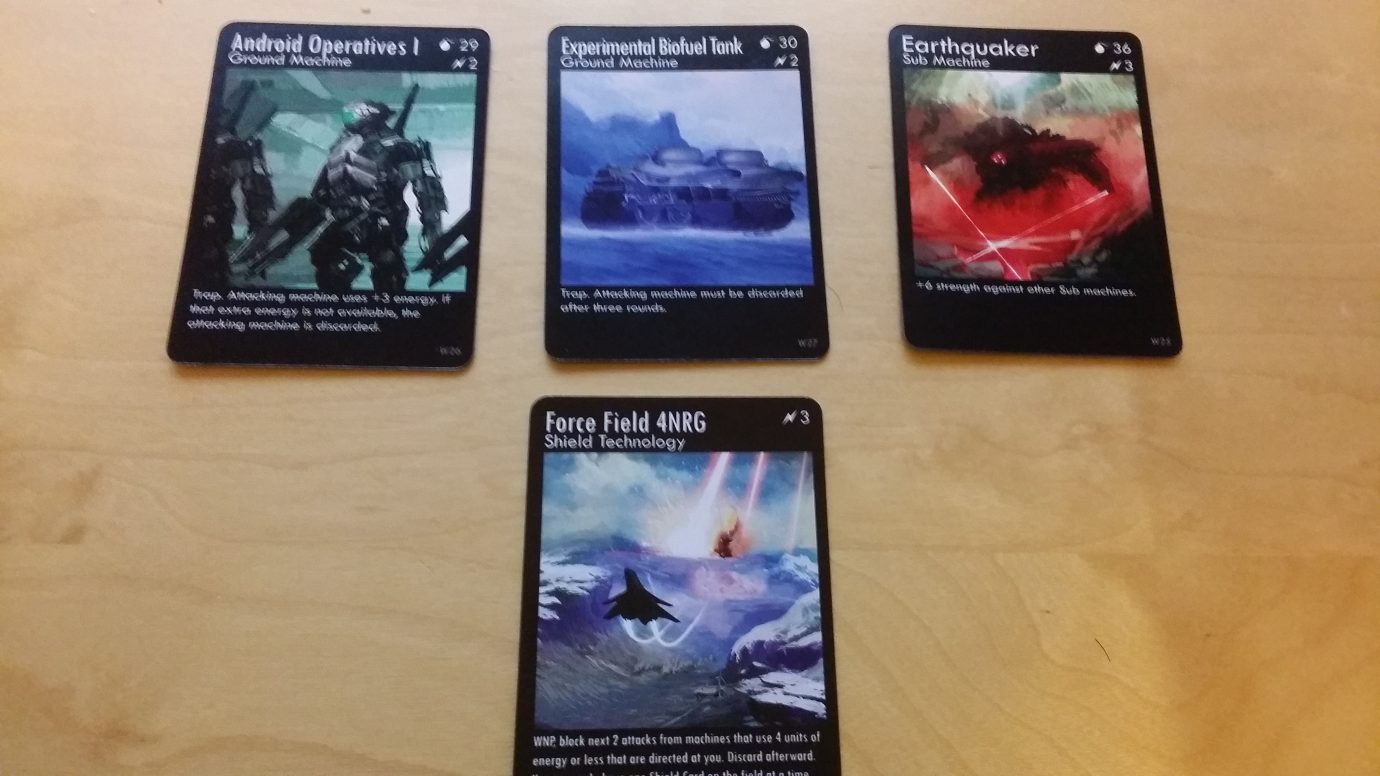 Disclaimer: I received a prototype copy of War Co. from Brandon Rollins in exchange for an honest review. Since this is a game still to go to Kickstarter, we can’t offer a full review as of yet, but we’re prepared to give our feedback on our initial impressions. This is, we think, a game worth considering when the project launches on Kickstarter on the 15th of August.

I’ve been following Brandon Rollins on twitter for a while. I started when I saw one of the art designs from War Co drifting into my timeline. I’m a sucker for sci-fi, and I find the aesthetics of a good future setting can be compelling enough to draw me in for the long haul. The image I saw was lovely, and I started keeping an eye out for additional artistic revelations about the game in progress. And man, I wasn’t disappointed. Look at these things: 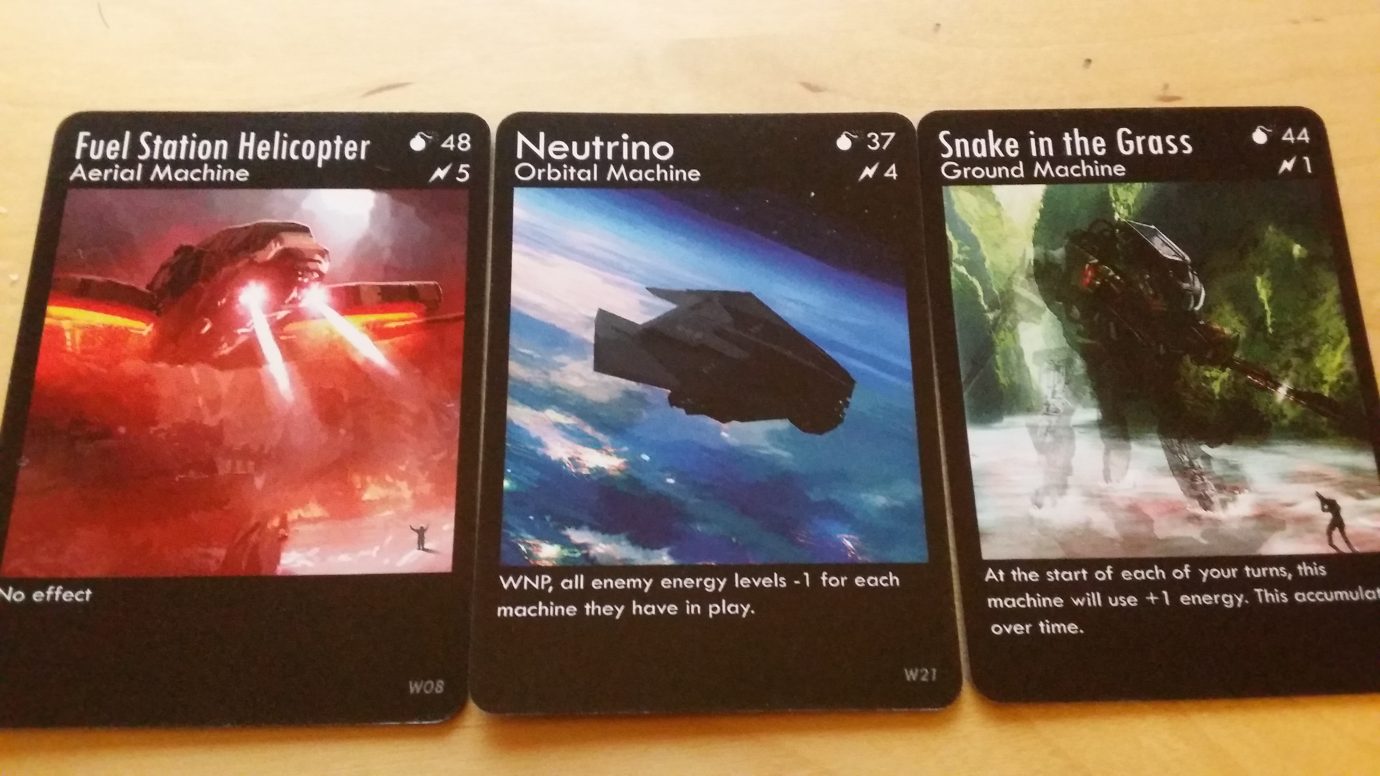 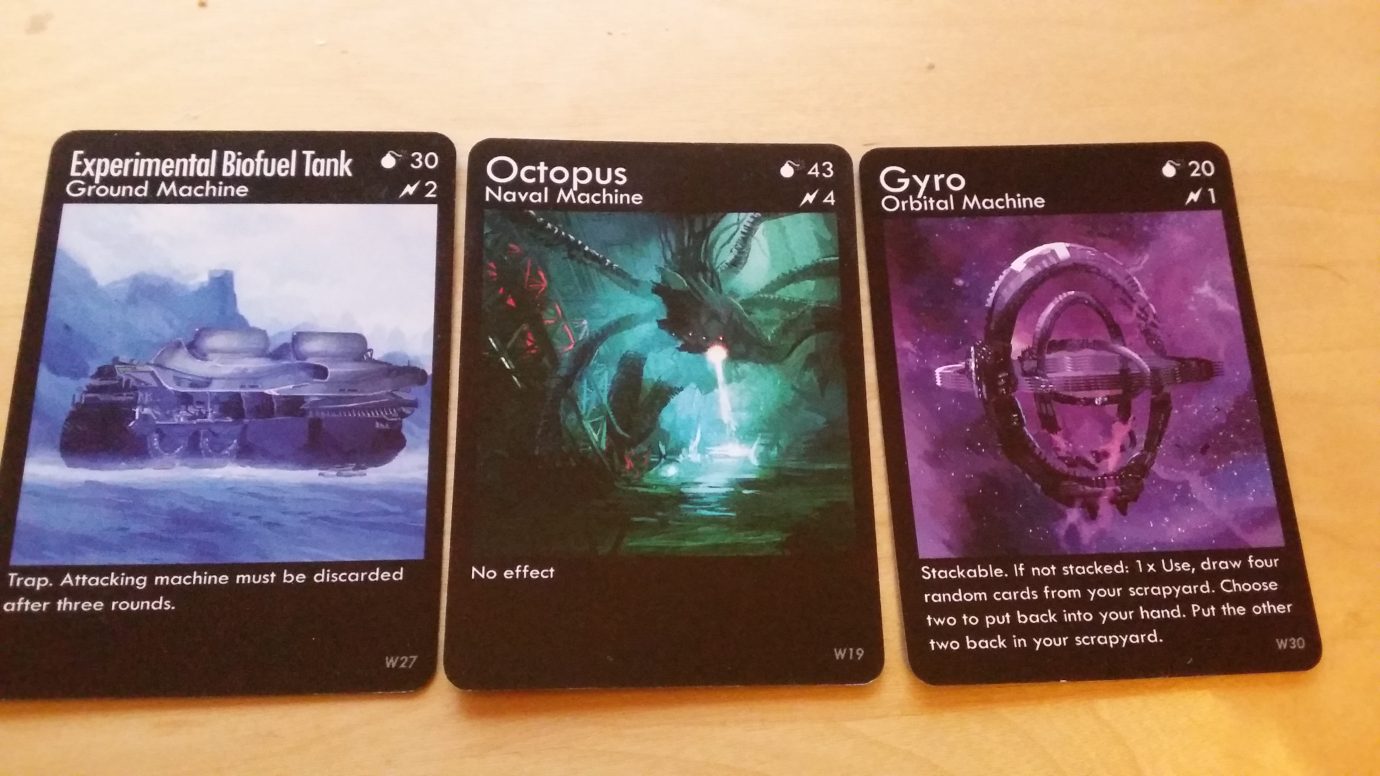 One of the things I’m planning to do when I finally get everything fixed in my house (been here two years. Still have a todo list longer than an elephant’s tallywhacker) is try to get some Dixit cards made up into full-sized posters, and hang them in the hall. When paired up with the right frames, I think that will look absolutely wizard and cement my reputation in the local community as the nerdiest of gaming nerds. I’m not lying when I say that I would happily buy up some print on demand copies of the War Co artwork and use those instead. The whole game looks absolutely bloody lovely. And not only that, the cards each come with a code that takes you to a page on the website that covers the key details of the technology, along with a whole chunk of intricate lore. This game is clearly a labour of love.

Truth be told, I haven’t had a chance to play this as often as I would have liked – hence why this is a set of initial impressions rather than a full review. However, I know that the game is heading to Kickstarter soon and I wanted to make sure that I had something written ready for it. It seemed only fair, since I received an early prototype of the game for that very purpose.

So, here’s a set of first impressions!

First of all, it manages to fill a niche in my collection – it has all the quickness and brevity of Star Realms, but very little of the arbitrary and uncontrollable synergy. You’re not curating a deck hoping that the stars align long enough for you to wipe out an opponent – you’re directly dueling them through the careful deployment of your most effective cards. Your deck is your army, and your economy, and your health. You’re constantly working to balance these in a way that maximises your damage output whilst keeping your opponent at bay. It’s got some strategic bite to it that puts an agreeably thoughtful spin on play in a way that is sorely lacking in Star Realms. 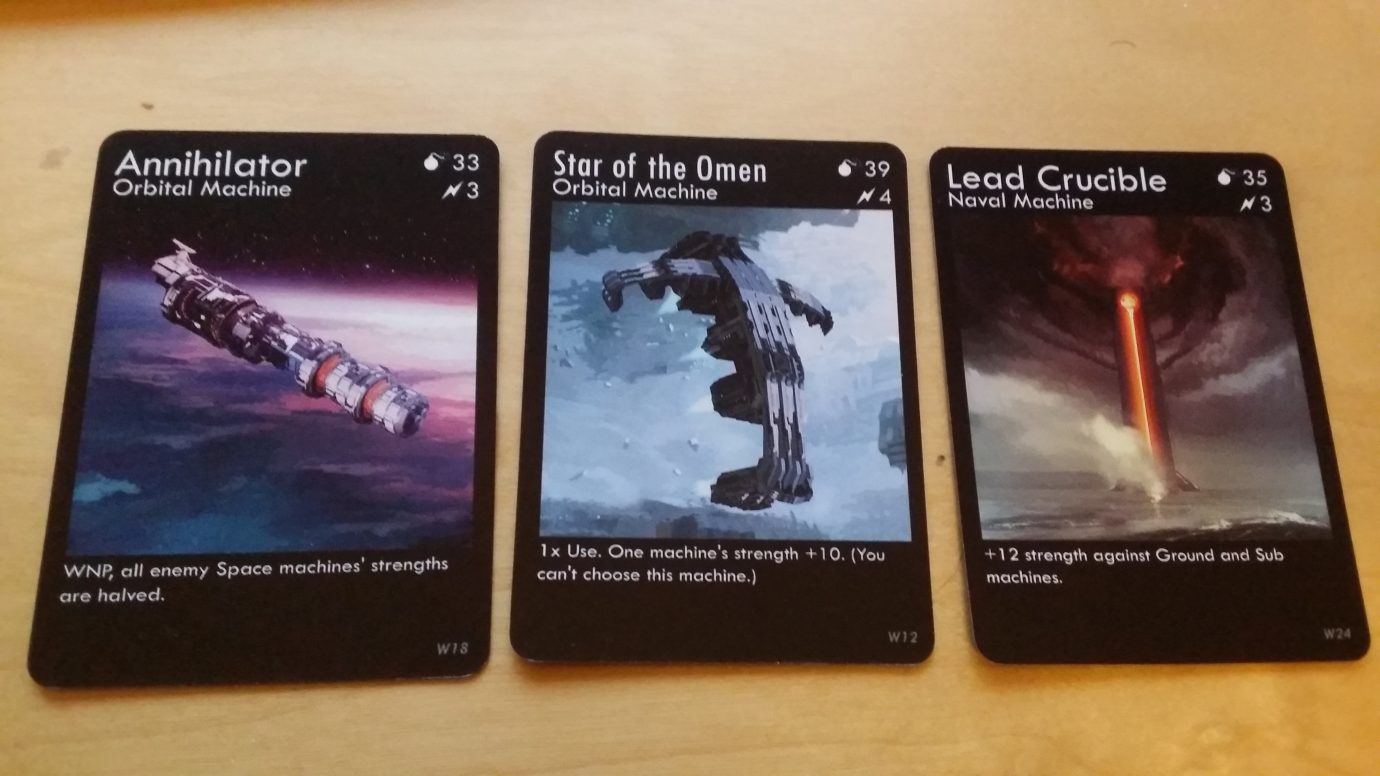 When I was a lad, ten energy got you a thousand ships, an ice-cream, and you had enough money left over for a picture show.

The cards are presented in a variety of factional synergies, and comprise of machines and technologies. Machines are your front-line troops – vast engines of vicious warfare that stand between you and the pain your opponent can inflict. You’ll draw cards, and play out one per turn to create your army and put together the logistical network of advanced technologies that will support it. Your opponent will be doing the same, carefully laying out a world of interstellar hurt should you dare transgress the No Man’s Land of the table between you. And then at some point you’ll hurl your machines against each other in a crash of metal and madness. You pick a machine, pick a target, and slam the first into the second. If the power of your machine is greater than the power of the defending one, you destroy them and inflict some damage on the player behind the curtain. They’ll need to discard a card from their hand. But that’s better than the alternative – if they have no machines in play, each attack will cost them three cards. When someone loses their last card, they’re gone!

As part of managing your war, you can also play cards ‘facedown’, which means they’re in the field but not yet deployed. Some of these can be traps, inflicting debuffs on an opponent foolhardy enough to attack without foreknowledge. War Co then has got a little bit of the subtlety and nuance of Netrunner as a result – there’s a whole espionage and counterespionage subgame in here if you want to indulge in it. The game actually does support a variety of play-styles, with some interesting synergies possible if you play the right cards from the right deck in the right way.

War Co reminded me a lot of Magic: The Gathering and Hearthstone – two games with which I am passingly familiar but far from especially enamoured with. However, War Co manages to incorporate four mechanics that genuinely make it play with greater flexibility and with more opportunities for gameplay expression.

The first is that you have a hard limit on the number of cards you can have in play at any one time. You can have three machines and two technologies. That’s it – so you better choose wisely. There’s some flexibility around this with regards to special powers and ‘stackable’ cards that can double up on attacks. On the whole you have a limited ability to influence the substantively alter logistics of deployment once you’ve set the wheels in motion. That creates a scarcity of opportunities that needs genuine thought to deal with.

The second mechanic is that every card costs you energy to play, and that comes from a fixed pool of ten units. Unlike Magic or Hearthstone, you don’t need this energy to play cards as such – you need it to maintain your troops. Your hand limit then is only a portion of what’s stopping you from domination. Your ability to feed the energy requirements of your units puts an additional stress on deployment. Ten units of energy doesn’t get you much: 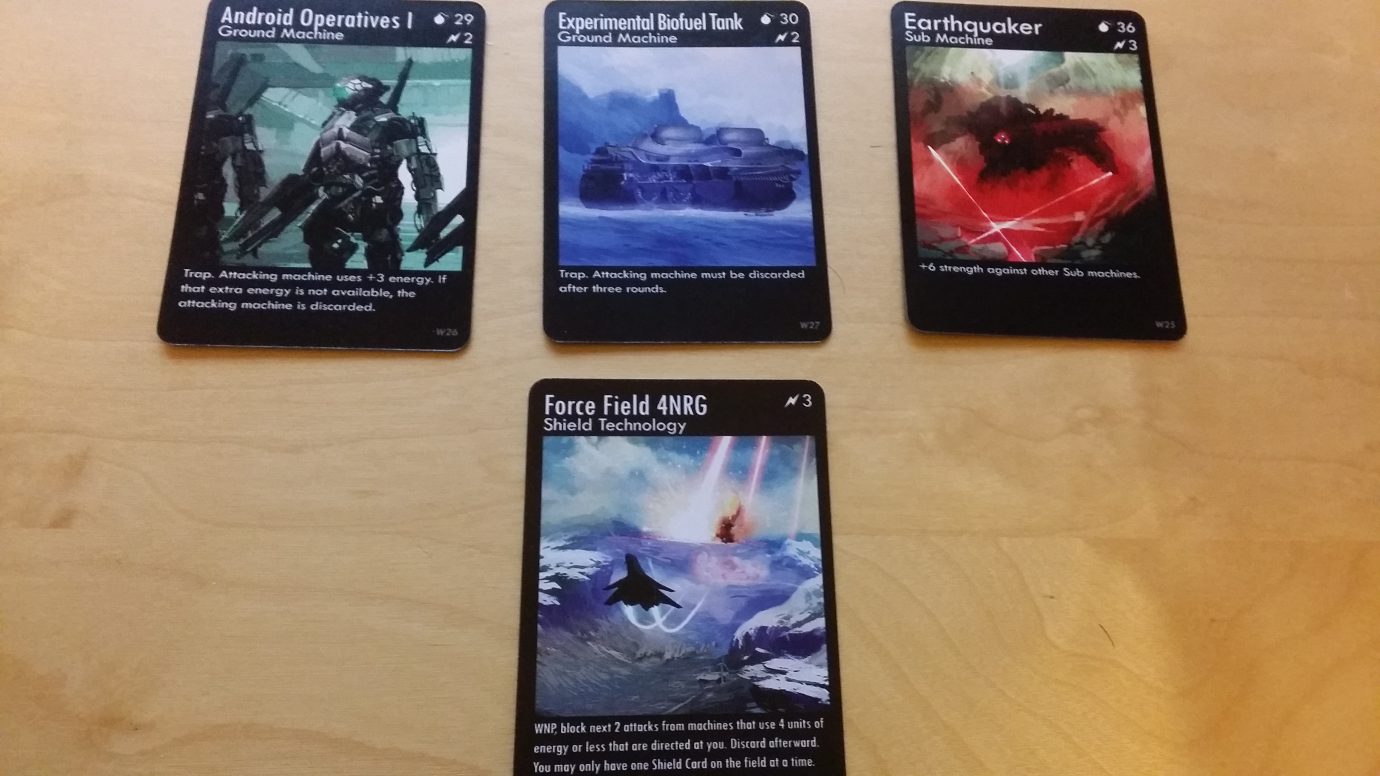 Luckily none of them are wearing red-shirts

The third mechanic is that your troops don’t attack en masse. They attack one at a time, creating a kind of interlocking sliding puzzle of opportunity that you need to decipher. You can’t just build up an armada and then hurl it at each of your foes in turn. That was a feature of M:TG and Hearthstone that made latter turns incredibly slow and ponderous before the game eventually anti-climaxed in a disappointing spurt of arithmetic. This is far more tactical – you only have a single attack, so you’d best use it wisely in a way that will ensure you keep the momentum of play.

All of this would all be a recipe for passivity, were it not for the final mechanic. Taken together they’d encourage people to bunker down until they were fully deployed in an optimal manner. However – every turn, you have to discard a card. Every single turn is bleeding away your deck health. You can’t hoard your cards until they have maximum utility, because you’re going to lose one every single turn. If this is your first draw at War Co, then you have to fight.

What’s great too is that Brandon and I have been discussing accessibility of games on twitter for a while, and he’s been very keen to look for opportunities to ensure War Co works for the widest audience. Again, a full teardown will have to wait until I’m more familiar with the game, but you can read his own thoughts on some quick and easy designer fixes for accessibility on this very blog!

So, these are my initial impressions of what looks to be a very promising game. The Kickstarter launches on August the 15th. If you like the sound of it, you absolutely should check it out!