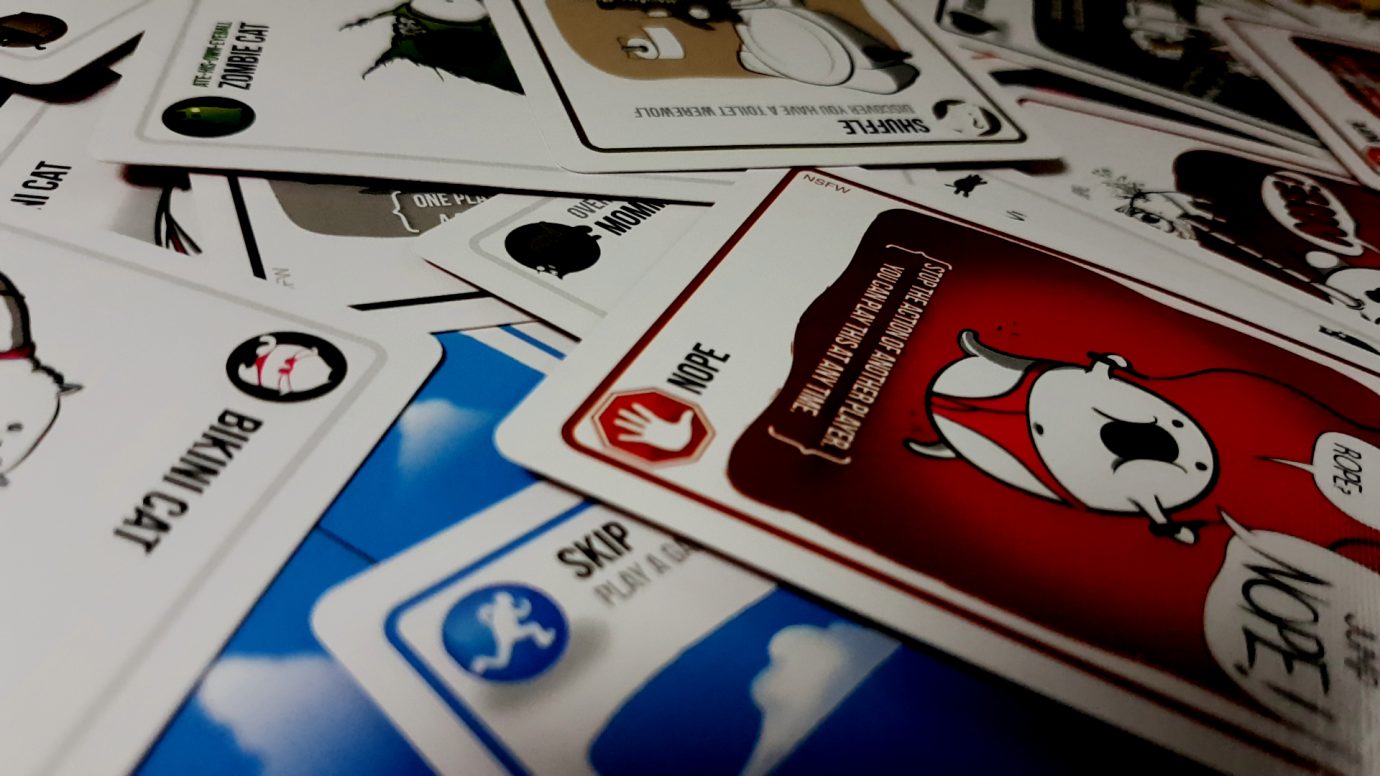 This is a weird game to have blown up in the way it did. Despite what its name would suggest. The box proudly proclaims it is the ‘#1 most backed Kickstarter project ever’. It is the ‘#1 most-funded game in Kickstarter history’. The last of these is certainly no longer true, but there’s no denying that Exploding Kittens was funded to a level that is far, far out of proportion with the the design of the game. This is not a game that should have raised almost nine million dollars. That’s bananas. It’s a game though adorned with art from Matthew Inman, creator of the Oatmeal comics, and in the end I suspect that’s primarily for what you’re paying. Like the Oatmeal itself it’s a triumph of branding over accomplishment. It’s a perfectly functional game, don’t get me wrong. It’s just that for almost nine-million dollars I’d expect something genuinely spectacular and this isn’t that. This is what I’d be expecting from a ‘My First Kickstarter’ game from a plucky, untried game designer with stars in their eyes and a song in their heart. It’s a respectable neophyte effort. I mean, come on – Gloomhaven didn’t even break the $4.5m mark and that includes how much it raised in its second campaign. Exploding Kittens is a largely forgettable card game of middling quality. Nine million dollars is utterly baffling. 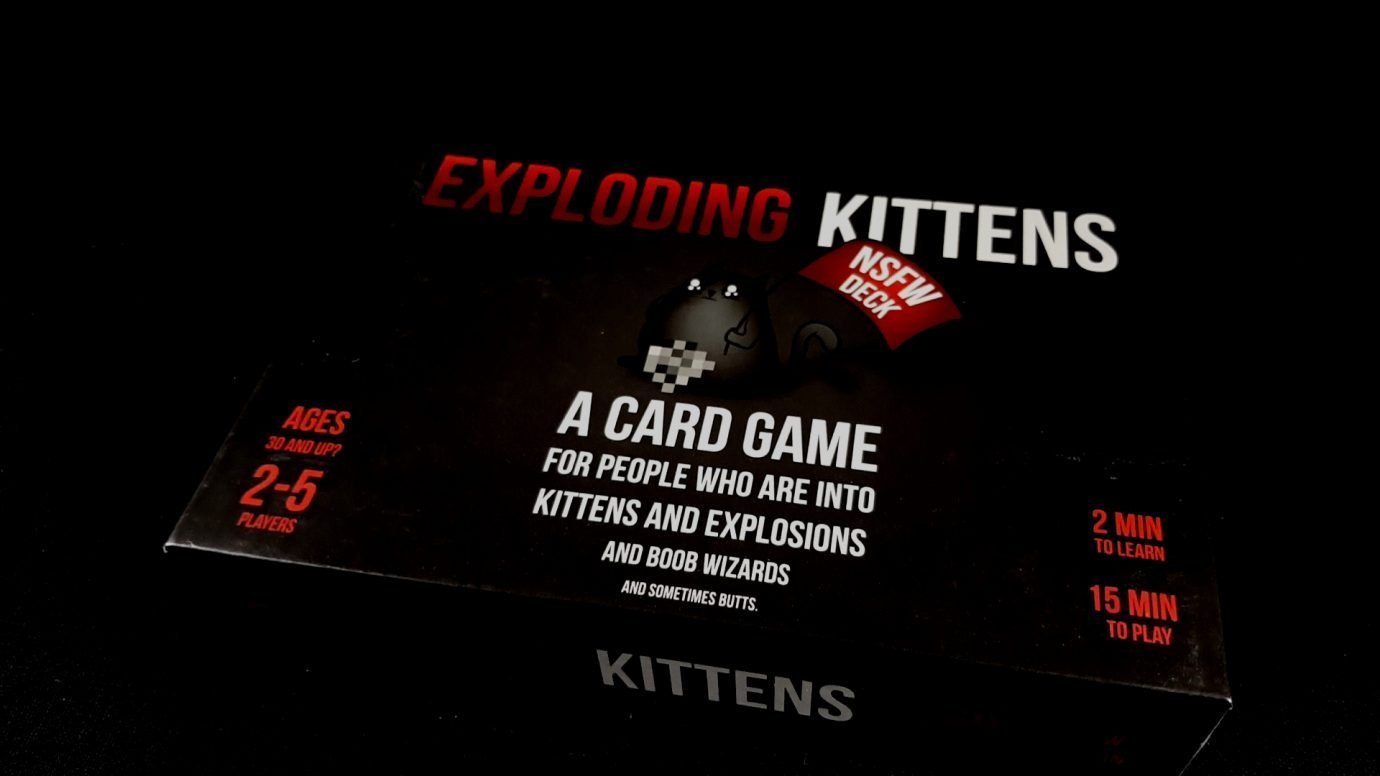 Its mystifying success doesn’t really matter though because this isn’t a game made for ‘people like us’. We’re the odd obsessives so consumed by cardboard that we’re reading blogs full of long-winded board-game reviews. Or, indeed, writing blogs of long-winded board-game reviews. Exploding Kittens, like Cards Against Humanity, has something of a black mark against it in the hobbyist board-gaming community. Its first run went to almost 220,000 backers, marking it quite clearly as something deserving of the dismissive ‘for casuals’ label in the hardcore mindset. It just doesn’t have the conspicuous cleverness that would allow it to stand out amongst other card games like Race for the Galaxy or Innovation. It’s really spectacularly uninteresting to write about, and that more than anything else is what’s going to make this review so (relatively) brief.

Each turn, you get a chance to play a card. Or play as many as you like. Some of these have special effects to go with them. Some of them have no special effects and need to be played as a pair or as a three of a kind. When you play a card, you perform whatever action is associated. Maybe you steal a card from a player, or shuffle the deck, or peek at the top of the deck. You don’t have to play a card, but you’re probably going to want to because each and every turn you’re going to draw a card. The cards in your hand are the tools for trying to make sure that the mandatory drawing is as painless as it feasibly could be. That deck is like an unpredictable dog that will lick you or bite you at intervals defined by the erratic gyroscopic oscillations of an invisible astrological conjunction. 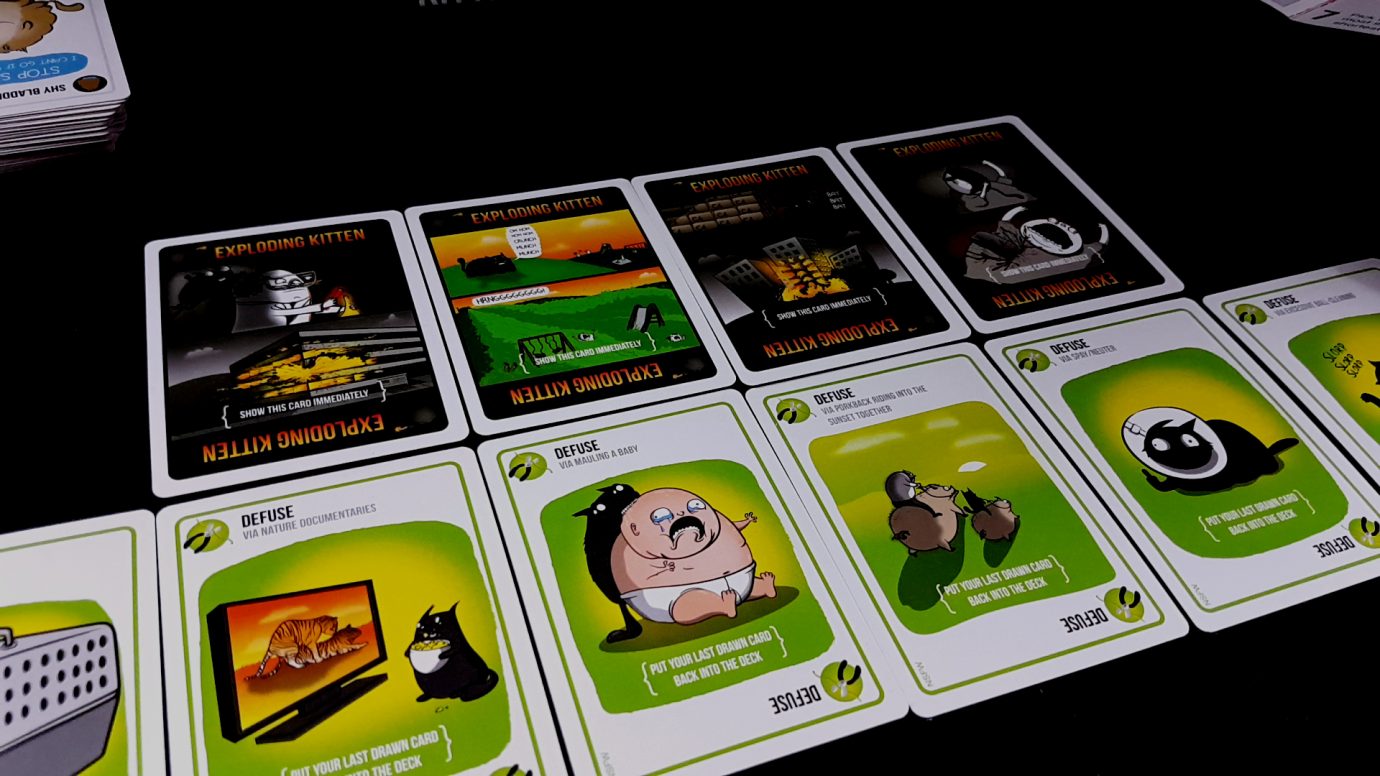 Threaded through the deck like landmines in a demilitarized zone are the eponymous exploding kitten cards. If you draw one of these, you’re going to have to spend a defuse card from your hand to get rid of it. You get then to take that exploding kitten card and secretly replace it in the deck at a place of your choosing. You might slip it to the bottom, making it a problem for Future You. You might slip it to the top, making it a problem for the very next player. Only you know where It’s been placed and presumably you’re not telling. Or at least, not telling truthfully.

If you don’t have a defuse card? Well, you’re just gone, buddy – we’ll send a bereavement ham to your grieving partner.

Everything in Exploding Kittens condenses down into that one key system – trying to avoid drawing an unknown card unless you have no other realistic strategy available. Your cards in hand are all basically delaying actions that stave off the inevitable. You maybe use a ‘see the future’ card and see the next card to be drawn is an exploding kitten, so you play down your ‘skip’ card to end your turn without drawing a card. And then someone else at the table lays down their ‘nope’ card to countermand your skip card. 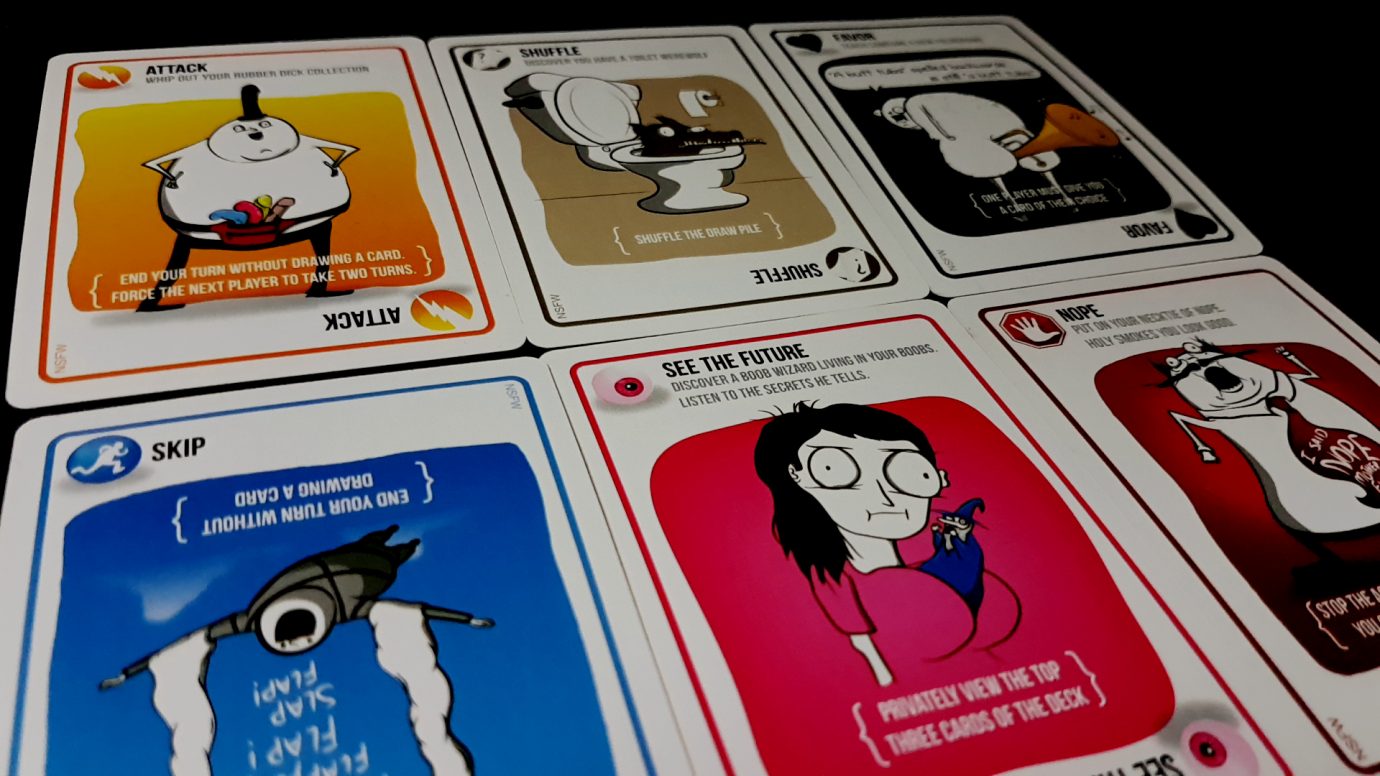 There are a number of defuse cards threaded through the deck, and getting one is like being granted a new life in a retro platformer. If you don’t have one ready to go though your entire job is to divine the way in which your cards can be played to make sure the next chump to draw a card is someone else. You might play a pair of cards to grab a random card from an opponent’s hand in the hope it’s useful. Maybe it’s an attack card that you then play to end your turn and force the next player to take two turns back to back. Maybe they then play a shuffle card that puts everyone back into a state of bewilderment and then instantly draw an exploding kitten. Maybe they defuse that, and on their second forced turn, draw a second exploding kitten that takes them out of the game.

Don’t overthink this though – this isn’t a clever game of brinksmanship and subtle social deduction. If games like the Resistance give everyone at the table a set of scalpels with which to cut the tension, exploding kittens gives everyone a bag full of hammers and invites you to beat lumps out of each other. It’s careless, rollicking fun that doesn’t ask a lot of anyone and departs before it becomes tedious. And that’s really where the review of the game ends. But you know, there’s a bit more going on in here.

Exploding Kittens also feels soulless and sterile in exactly the same way that the Oatmeal usually comes across to me – occasional low-level profundities that are explicitly designed to go viral with the least friction possible. It feels like a game that was beautifully designed to be a massive success, rather than a game that became a massive success because it was beautifully designed. I’m reviewing the NSFW version here because it’s the one I own, and even in this version it comes across as the least objectionable variety of the NSFW concept. It’s crass and tasteless in an unfocused, amiable way. It’s stream-of-consciousness vulgarity that can’t truly offend because it never takes a stand. Cards Against Humanity effectively forces you into the position of expressing horrible thoughts in an escalating cycle of one-upmanship. Exploding Kittens references ‘boob wizards’ and ‘your rubber dick collection’ with a vapid sense of indifference. It seems explicitly designed to meet some kind of Big Data Optimised lewdness quotient that has shown maximum market penetration for minimum market pushback. Maybe I’m not a good benchmark for this – a life on the Internet during the 90s and 00s has basically rendered me immune to offense. The NSFW portion of Exploding Kittens has a vocabulary for vulgarity that was almost certainly focus tested in a corporate meeting room. It’s NSFW as market branding, and as a result it feels like when a big company gets behind a trending viral hashtag. You know that the ‘cool’ they’re looking to tap into has been painstakingly analysed for its dollar value.

The best games I have played are, first and foremost, works of love. It’s clear that everyone involved, from the artist to the designer to the publisher, have done their best to make a game that is as good as it can be. There are flaws and imperfections, but those are the welcome signs of the human hand at work in the creative process. This though – this feels like it was designed, executed and illustrated by an algorithm with a fitness function tuned towards the profitable blandness of mediocre expectations.

Exploding Kittens is absolutely fine – aggressively fine. Explicitly, consciously engineered to be fine. You will have an acceptable amount of fun with this game, now and again. You might even have lots of fun with this game lots of times. In such circumstances though I’d bet cash money you could replace Exploding Kittens with a bag of marbles and nothing much would change. The game is just a reason to sit together and enjoy each another’s company. Maybe that’s the takeaway here – the real Exploding Kittens is to be found in the friends we made along the way.