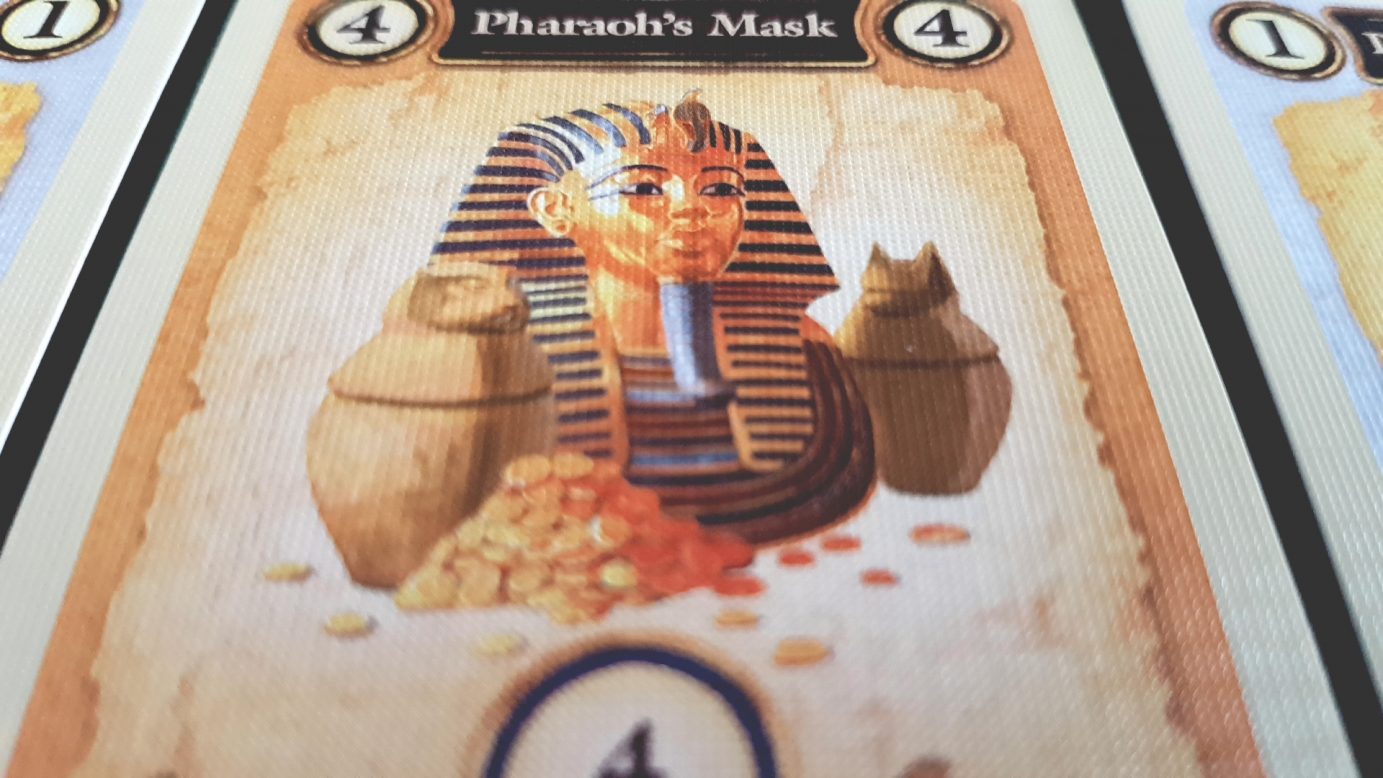 Archaeology: The New Expedition strikes me as a game I shouldn’t like. It’s very random, driven far more by luck of the draw than skill with cards. It’s very simple, comprising mostly of set collection and little else. It’s a little bit off-putting in its framing, explicitly casting you as robber that’s raiding tombs and selling their contents to the marketplace for your own enrichment. And yet I like Archaeology. I like it a lot. 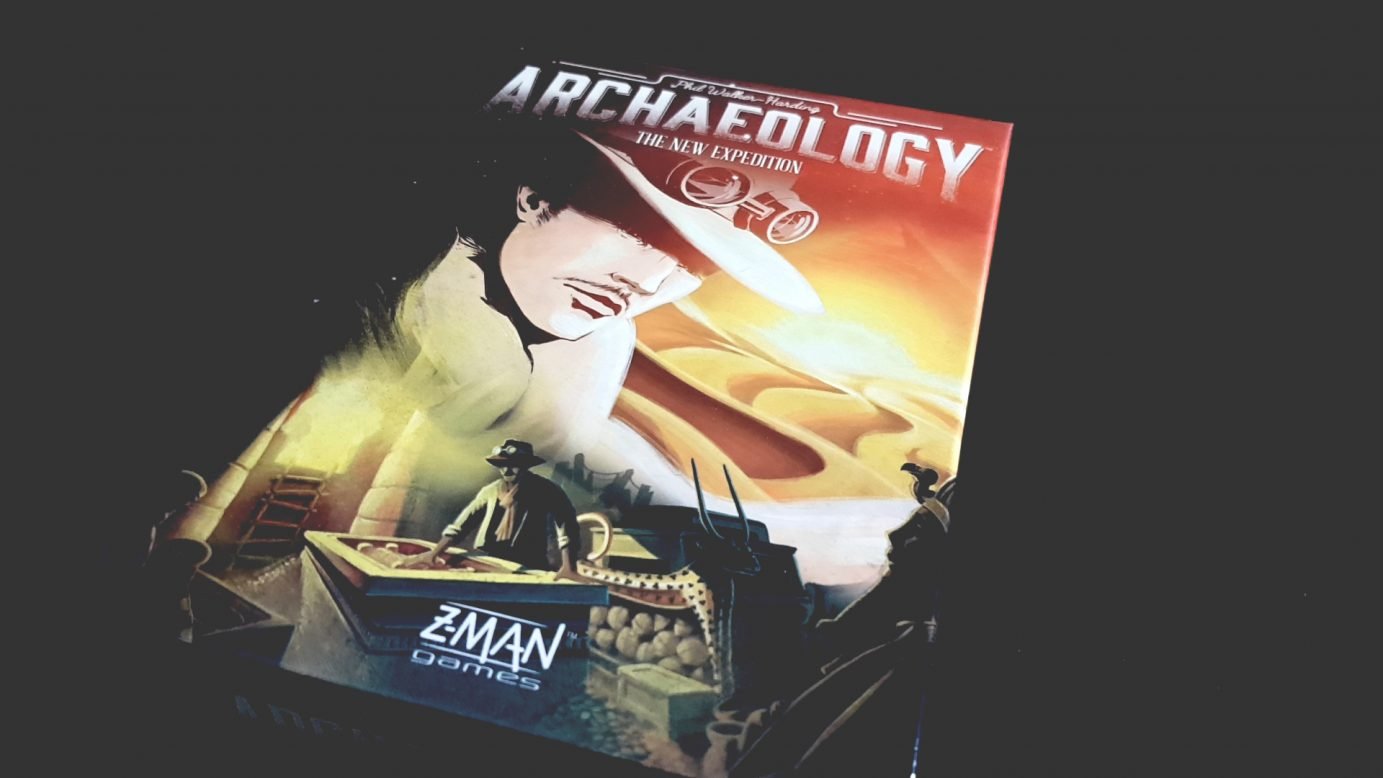 I think it’s because it’s a very successful stew of some of compelling elements from other games. It has the rich, vibrant marketplace that makes Jaipur such a joy. It has the vindictive mercurial unpleasantness of Catan’s robber – dig too deeply and too greedily into the desert and you’ll find your coveted treasures replaced with sand trickling through your fingers. It has a safety net to stop that vindictiveness being too unpleasant. It’s all just seamlessly competent design.

But even that doesn’t really explain my affection, because competent design just leads to competent games, and Archaeology is more than merely functional. There’s some weird catalyst in here that takes effective but ultimately mundane mechanisms and converts them into something purer. I think perhaps it’s just that it’s an effective recognition that sometimes we don’t really want genius or originality in games. We just want to wrestle with a cruel and indifferent fate and come out on top. We’re driven in part by atavistic whims, and one of them deep in our evolutionary firmware is the need to conquer.  Whether that be the environment, the ecosystem, or the vagaries of fate. Sometimes we just want to parlay a hand of cards into glory. There’s lot of opportunities here to make that happen, and I think really that what Archaeology plays on is the same compulsion that drives me to pour money into every slot machine I see. This game might just be made up of cards, but I can hear those reels seductively chunking into place every time I pick up a treasure. 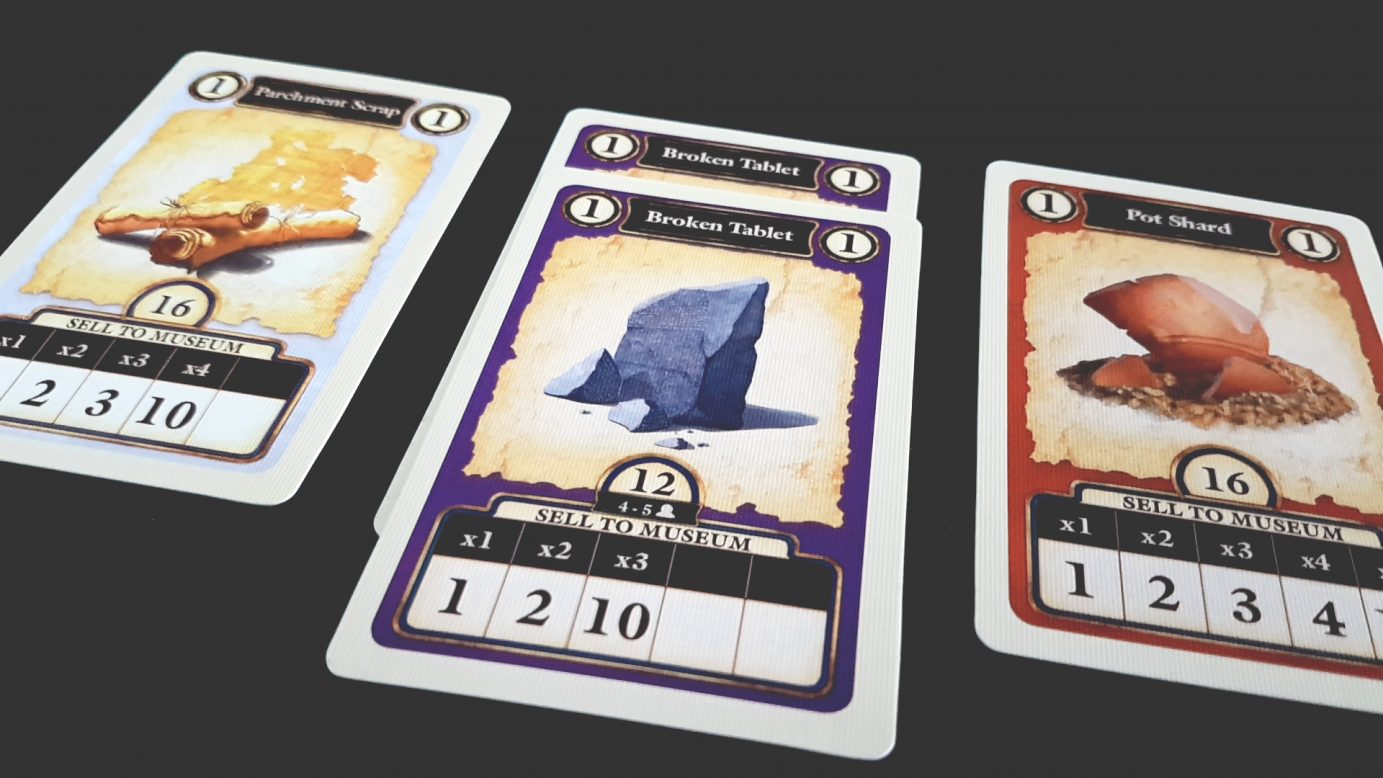 Okay, enough of my weird psychological quirks. You’re not being paid enough to act as my psychiatrist, and that’s just as well. There’s some dark shit in my head that you don’t want to explore. Let’s move past what I’m getting out of this game, and talk instead about why I think you might enjoy it as well.

Fundamentally, Archaeology is a game of picking up cards, and spending them in sets to get points. To do this, you draw cards from a deck of wonders (and blunders), and trade cards you don’t want for cards you do want in the marketplace. Every so often you’ll find a map fragment. Spend enough of those and you’ll get to raid a treasure chamber. When you do that you pick up one of the piles of cards that are set aside form the main draw, and add them to your collection. Maybe you’ll only find broken pots and old coins, but maybe… just maybe… you’ll find a real prize amongst the detritus. Every so often, you’ll draw a thief card from the deck. That lets you steal a random card from an opponent. Or… maybe you’ll draw a sandstorm. At that point, if you don’t want to sacrifice your single use tent, you take half of your cards and discard them to the marketplace. Eventually, all treasure will return to the desert to be gradually reclaimed by antiquity to come.

That’s the entire game, and it’s not obvious why it should shine. Let’s say you’ve got a modest hand of treasures. A few coins. A broken tablet. A map fragment. A golden mask potentially worth a king’s ransom if you get a full set. The more of a particular kind of card you cash in, the more points you get… up to a point. Cashing in two coins gets you six points. Cash in three, and you get twelve. Five coins? Thirty points.  Archaeology at every step of the way is nudging an elbow into your side. ‘Yes, effendi – that’s worth a lot. But it could be worth more. Just keep digging’

But… it’s probably not going to happen next turn, right? You’ve still got time to make your fortune.

That’s where the spirit of Archaeology lurks, in the darkness of your own greed. Sure, twelve points now is great but thirty points in the next round is so much better and all you need is a bit of luck. You’re due a bit of luck, right? Just one more spin of the slot machine. Just one more hand of blackjack. Just one more roll of the dice. Your ship is coming in. Your luck is gonna hold out.

But that’s not all that’s at play here. If you were just drawing cards and cashing them in before they lost their value, then you’d just be a pawn. Here though, you’re a mover and shaker. You can trade any cards in any quantities to the marketplace, and collect up an equal value of abandoned treasures. And this is where you get to shape the direction of fate before you throw yourself on its mercy. 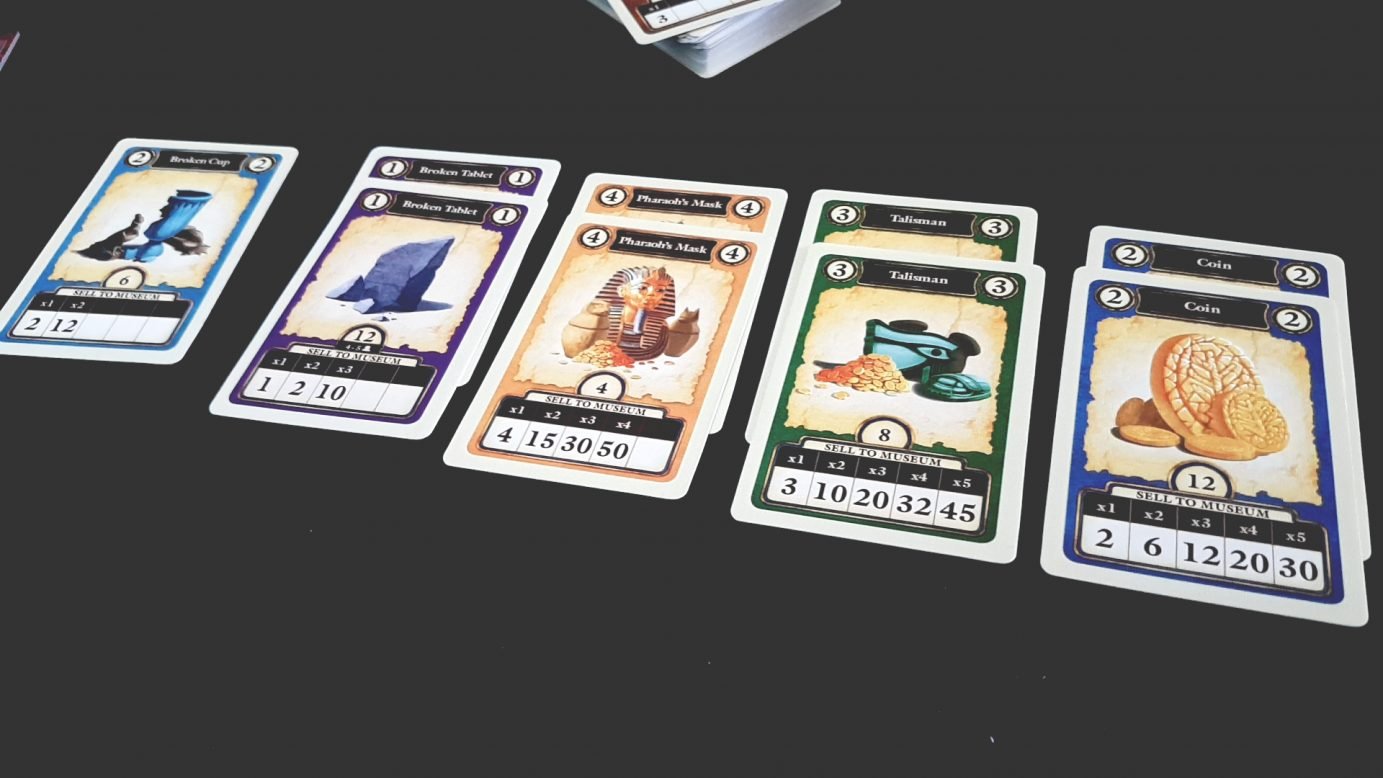 You could trade those three coins you had, and that map fragment, to buy the two masks from the marketplace. Or you could trade the mask to buy two coins. Five coins is thirty points, but three masks are also thirty points and if you find a fourth it’s a massive fifty. A fortune upon which any treasure hunter could retire. But thirty points now versus maybe fifty later? How lucky do you actually feel here?

Because let me tell you buddy… wind’s howling. A storm is coming. The desert is never asleep for long.

Marx wrote ‘Men make their own history, but they do not make it as they please’. In other words, we make our own fate, but in circumstances not of our own choosing. Archaeology inverts this. We surrender ourselves to fate, in circumstances we choose for ourselves. We don’t simply give in to the inevitable. We choose where we stand, where we fall back, and when we strive on. We make the decision, and then we reap the rewards or not. It’s almost a philosophical treatise in game form.

Otherwise, we need to think of Archaeology in less morally laudatory terms. Perhaps I’m giving it too much authority by thinking of it in a Marxian context. Perhaps the better lens is that of a gameshow. You could spend those two map fragments to get the full set of parchment scraps and their ten points. Ooorrrrrrr do you want to take a gamble on what’s in… the tomb?

And come on. Who isn’t going to want to see what’s behind the mystery door? Nobody that would enjoy Archaeology, I can say that with certainty. Those cards you’ll get are almost certainly trash, but almost is a seductive word. It insinuates itself into your thinking like poison through a vein. And perhaps in the end that’s what I like the most about this game – that you are constantly pulled in the orbit of a binary star system – alpha avarice and proxima possibility. You spend your entire game-time in a surprisingly habitable Lagrange point, which is quite a journey to take when you started off looting Egyptian tombs. The downside of all this is – sometimes the only thing fate has in store for you is a kick in the teeth and there’s little in here to help manage it. Mrs Meeple and I played a game where I lost half my cards and kept the best ones. That was followed by a thief, which let her take one of the three masks I had collected. Then another sandstorm. In the space of a few rounds all I was left with was a single mask and absolutely no other cards. Nothing really to trade, no sets in progress. I was left as nothing more than a desiccated skeleton on the hot Egyptian sands. There are times that this game feels more like living through the Treasure of the Sierra Madre than it does a day-trip from Croft Manor. And that occasional blip really undercuts the tension in the game. At no point in this scenario was I bearing the consequences of my own greed.

The tent card does give you some opportunity to mitigate this but it’s such a singular benefit that it’s often hard to justify it expenditure. If you’ve got a hand full of really expensive things it’s an obvious decision. When you’ve got a hand half-full of trash, like I did, then it’s harder to justify. Similarly for saving a single card of a pair… why waste such an important shield on such a trivial target?

In such circumstances, and they are a regular feature of the game, it comes back to the old familiar criticism… a game that’s only lesson for the future is ‘be luckier’ has a structural flaw that no amount of cleverness can mitigate. Even a game, like Archaeology, that is consciously working hard to get you into the mindset of a compulsive gambler. Sure, that’s part of the fun of taking a stand against fate… but Archaeology can kick your legs away from you before you even find your feet.

But you know – don’t let that put you off. This is a smooth, satisfying game that will succeed more often than it fails. It’s a hugely enjoyable casino in a card game. Just remember… the house always wins in the end.