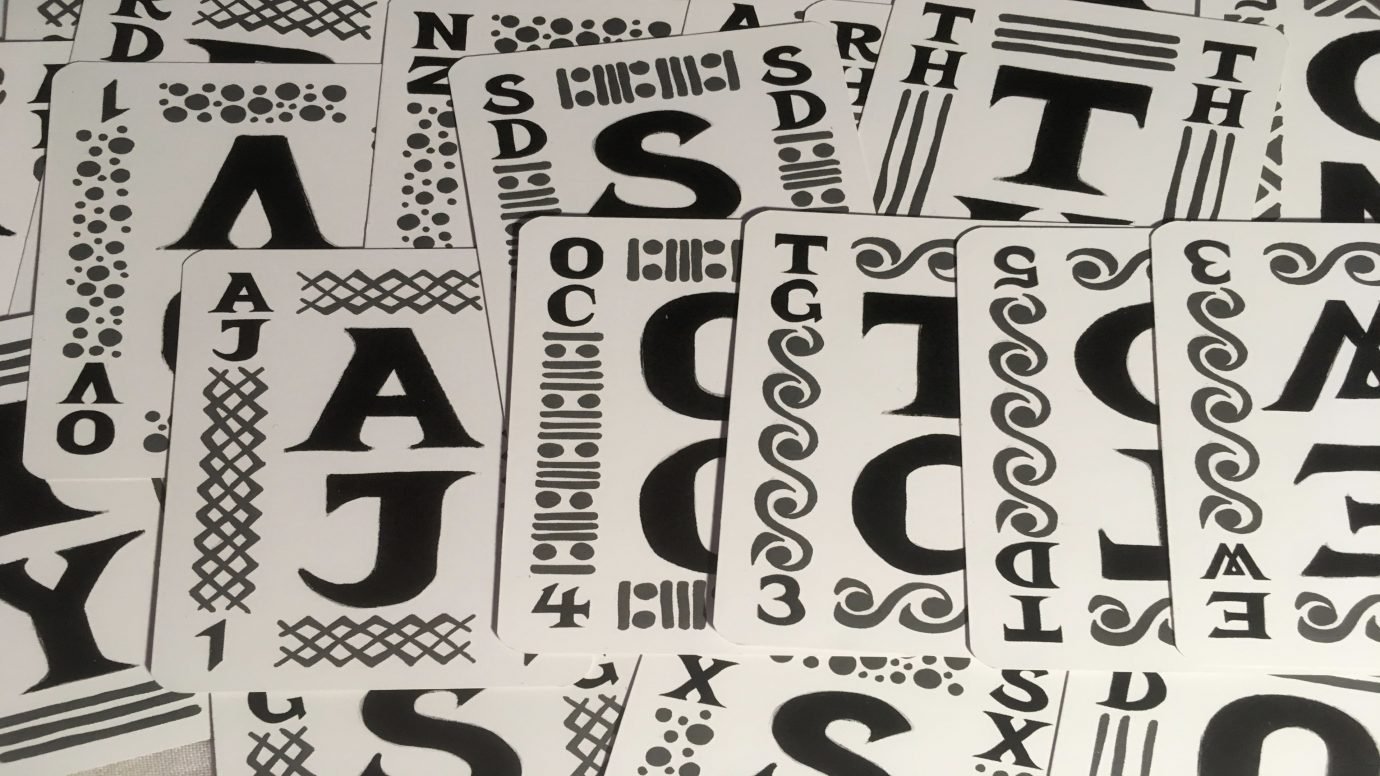 Accessibility in Action is a new and likely irregular series for Meeple Like Us. It was sparked off by a conversation between ourselves and Brandon Rollins about how we could do more to reward game developers for focus on accessibility in the early days of their projects. If you’re willing to write a post for Meeple Like Us outlining how accessibility was important to your project and what you did to make your game as accessible as it feasibly could be you can have free rein plug your Kickstarter, your online store or your product webpage right here! Kicking us off with the inaugural post in this series is Bez, who is going to talk to you about the Wibbell++ second edition Kickstarter. You may remember this game from our review and our teardown of the first edition. Bez has Some Thoughts on accessibility and how the second edition has been developed with that important topic in mind. Take it away, Bez!

I am Bez and I am in love with games.

Soon after seeing a Spectrum loading screen (before I could walk) I knew I wanted to make games. I made some on the TI83, BBC computer, Yaroze and then used Flash (at the time a piece of software by Macromedia) to continue making games for PC web surfers. I originally started making boardgames as a curiousity and ‘for practise’. I started to enjoy these more than their digital counterparts and in 2015, I published my first mass-produced thing – In A Bind – which has since been re-released (by Gigamic) as Yogi. Wibbell++ was my 2nd thing. Every 1st August I plan to release a brand-new game/thing. August 1st 2018 will see the release of both Wibbell++2nd Edition and Kitty Cataclysm.

I want Wibbell++ to be the best curated game system that money can buy.

In case you haven’t read Mr. Meeple’s thorough overview and accessibility breakdown, let me summarise: Wibbell is a word game that tests not only your word-building but also your speed of thought. Wibbell++ is the deck used. In the original box, there were 5 rulesets included with a promise of more to come – for free if you visit the website.

I always knew that I would be creating the bulk of games to start with, but I’ve already noticed a shift – more and more people have been submitting games. It’s already at the stage where I should be focusing more on writing rules and helping people develop their ideas than trying to generate brand new designs.

Each of the games is inaccessible in its own way. Games are all about overcoming obstacles – a time pressure; the speed of your hands, perceptions, or mental agility; the lies of other players; your command of the English language… If any game were to be made truly accessible, then there would be no game left. The trick is simply to make sure that the inaccessibilities are carefully and deliberately chosen.

As an example, two of the original five games have changed very slightly after many months of observing games directly and considering remote feedback.

Faybell (the storytelling game) now only has four story elements. There is even a suggested variant for only three. That already pushed the stories towards a breaking point of simplicity so two story elements is – figuratively – inconceivable!

The whole notion of this game was to test your creativity and mastery of language. Five story elements did allow for some greater control over the setup of the narrative. However, five story elements too often resulted in unexpected memory issues and the benefit massively outweighs the cost. My memory isn’t perfect by any means but I think it’s better than average and so empathy, consideration and a LOT of observation is required to ask yourself if any game’s rules make themselves /unnecessarily/ inaccessible. 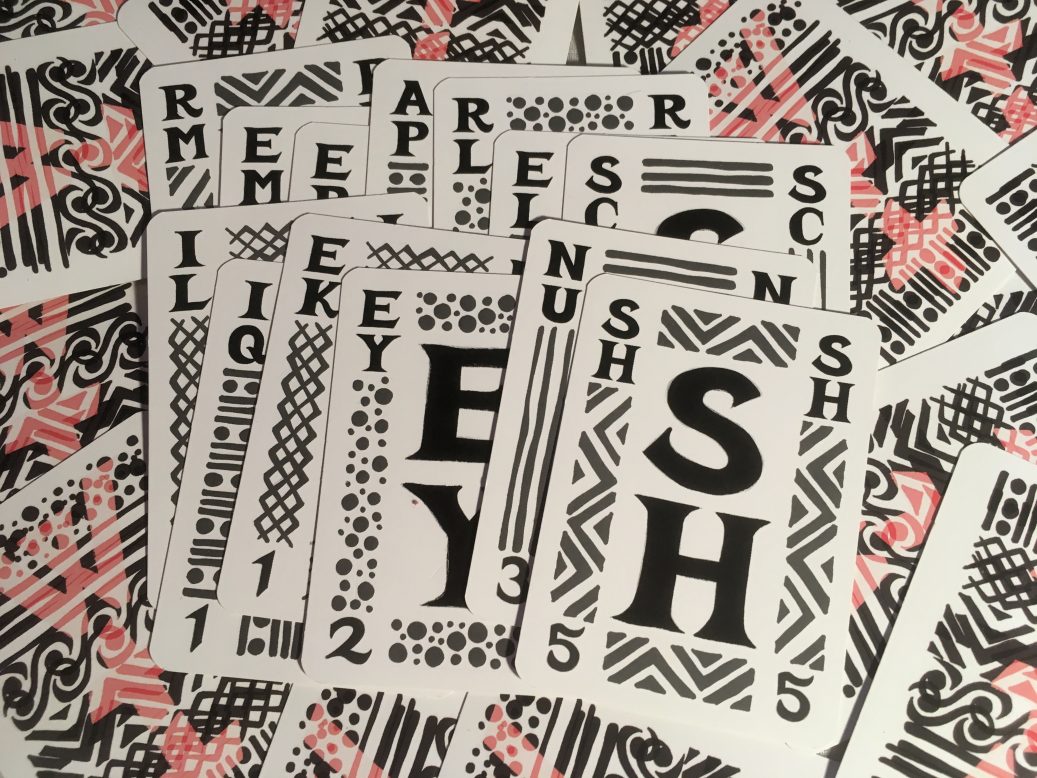 I want Wibbell++ as a whole to be as accessible as possible, though of course my abilities aren’t superhumanly perfect and concessions would need to be made even if they were.

A large part of why the original deck was black and white was to keep it as stark and easily-read as possible. For the 2nd edition, I was actually considering using colours for borders or even letters, to provide additional source of information. ‘A’ could be a different colour to a ‘V’ and ‘C’, ‘G’ and ‘O’ could all be different colours. There would be five or so colours that I picked to help people ‘remember’ these things.

I was told that this might actually increase confusion rather than lessen it, so I have kept to black and white letters. This stresses the importance of actually consulting your audience, even if ‘just’ by talking to folk.

The borders however are now coloured. Not different colours – another thing I was considering and was told (mainly on Twitter, by folk including Mr. Meeple) that this was another potentially problematic idea. By keeping these all the same colour (a sort-of-reddish-hue) there is nothing to worry about. This reduces the focus on them and helps make the letters themselves more visible.

Numbers and borders will essentially be fainter than before. Whilst these are important in some games (but none of the core games so far…) they are intended to be very much a secondary feature – less important than the letters. They were already slightly lighter but I think I could go further – cementing the hierarchy and making them slightly less distracting whilst still keeping them dark enough to be easily read across a table. 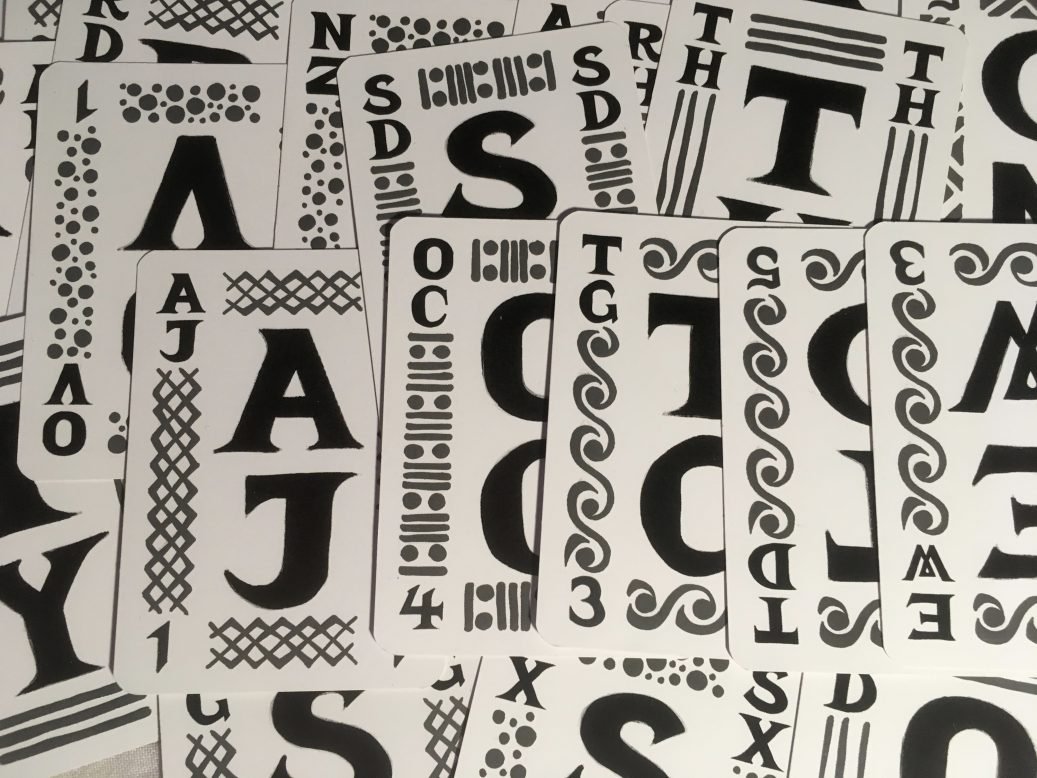 The letter shapes themselves are of course very important – in the original teardown, the similarities between O, C and G were noted. Coincidentally, I first noticed the potential confusion between C and G just shortly before that teardown was made available.

This art is still to be done, but I will be involving backers a lot more this time. I will be showing the entire alphabet as I go and redrawing the letters until they’re as identifiable as possible.

A dyslexic friend told me that [SG] is the worst card to read because of the lack of space between the characters. S has been noted as a generally-problematic letter for spacing reasons. Y was a slight problem for someone else, because of the overextended serifs making the shape seem slightly unfamiliar. Even V and A have been confused by some players.

I will make the S higher and the G lower. I have to pay more attention to not only the baselines and cap height but also the specific letter pairs found. As I’m dealing with pairs of letters rather than text, my line spacing is smaller than I would suggest for body text and the letters need more care.

I will emphasise the stem and crossbar of the G and take away some of the variable line weight of the O to distinguish them from each other and C. I’ll also sharpen the bottom of the V (to distinguish that from A) and reduce the tapering of the serifs on Y (for general readability). I really hope that this will be a beautiful set of letters that is more readable for everyone. 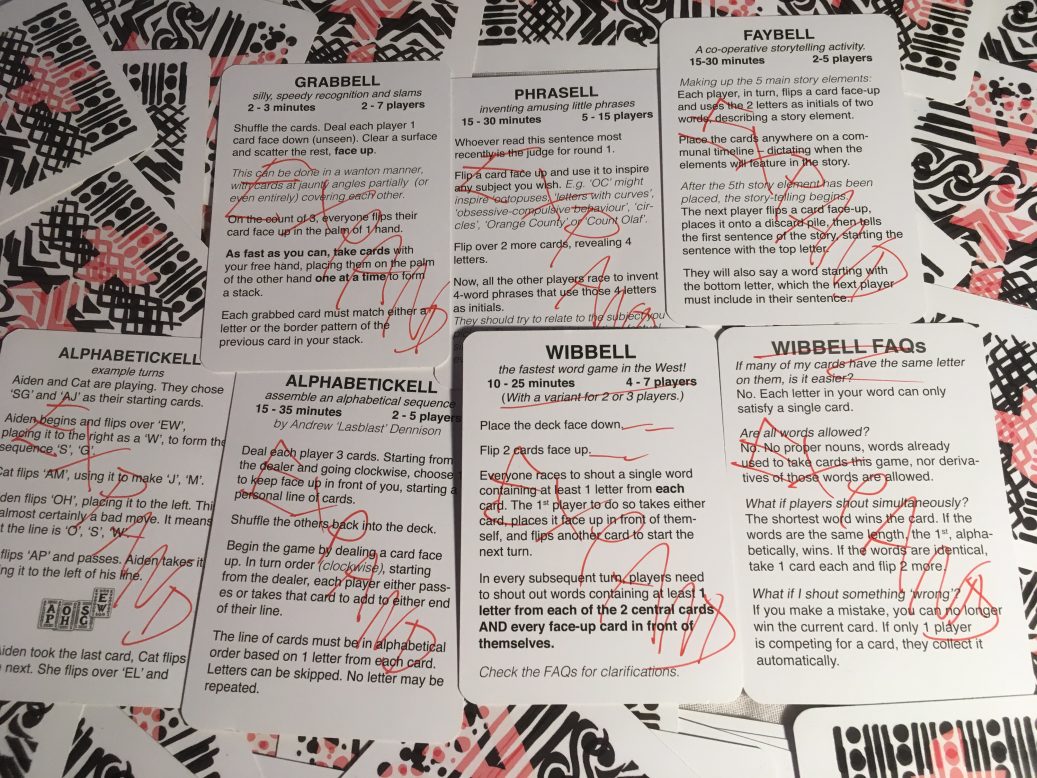 As the 2nd edition is a ‘fancier’ version, each of the 5 games now comes on its own sheet of paper. I’m basically expanding the information into a space 4 times bigger than was the case for the original. Text is now larger – 11pt for the main rules – and I have rewritten it all to be as clear as possible. The reverse of the paper has some history and credits. This is in smaller text as it is only there for folk who are curious enough to delve more deeply.

If someone is opening this up for pack the first time I’m far more confident that they will now be able to immediately start playing – without any mistakes made, or guidance required.

The 2nd edition is £17 so it’s a little more expensive than the first. My overall vision for the system though is to cater for everyone. Assuming my KS is successful, I will probably go on to produce a 3rd edition in 2019 and that would be as cheap as I can possibly make it. That might work by omitting any rules at all (as you can find them online), and providing half-sized cards. That edition will be a bit less accessible as a result, with smaller cards potentially causing readability and physical handling issues, but my long-term plan is to make different decks that are – as a collection – accessible to everyone with games that are suitable for players of all kinds.

If you are a Wibbell++ player and have a group that can’t find a game that seems accessible to all of you, please let me know – if nothing exists yet, I might be able to come up with some ideas. There is an active growing community on Facebook , and games continue to be submitted here and (though there is a backlog) eventually added here.

I know that money is tight for many people and maybe £17 is simply something you can’t afford.

If you can though I hope you’ll consider the 2nd edition Wibbell++ deck worthy of an investment. 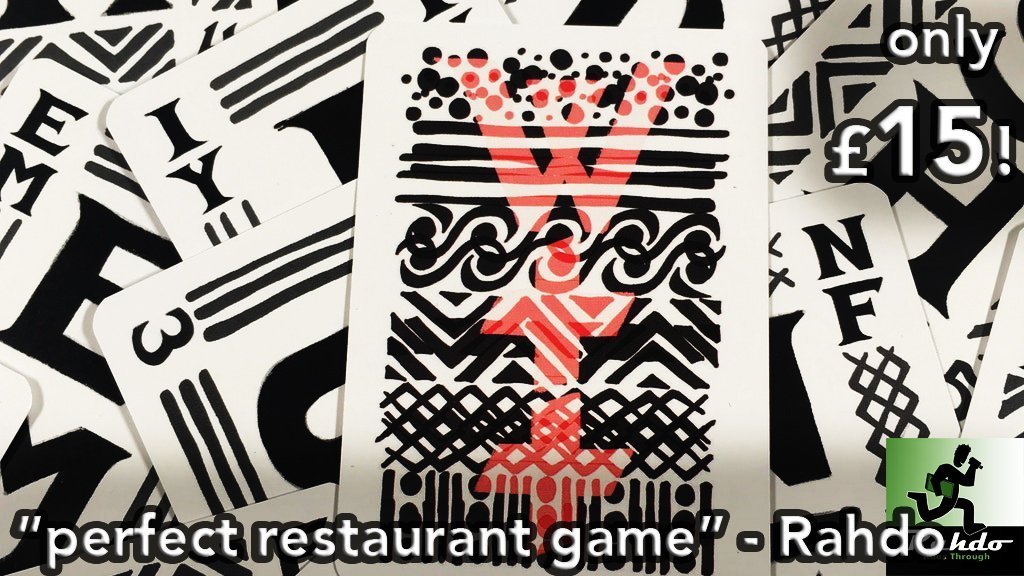 The Kickstarter for Wibbell++ 2nd edition is finishing at 11pm GMT on Thursday 22nd February 2018. Sorry for the short notice. Find it here.

*Any boardgame shop that stocks my stuff is clearly one of my favourite shops. Making the above statement of where to find it a bit evasive. But if it’s not at your FLGS and you wish to buy it from them, please ask for it and hopefully they can get it after release. Within the UK, they should contact their distributor or me directly. Within USA, me or IGA. Within any other country I don’t yet have distribution set up but happily post stuff either to retailers or individuals.