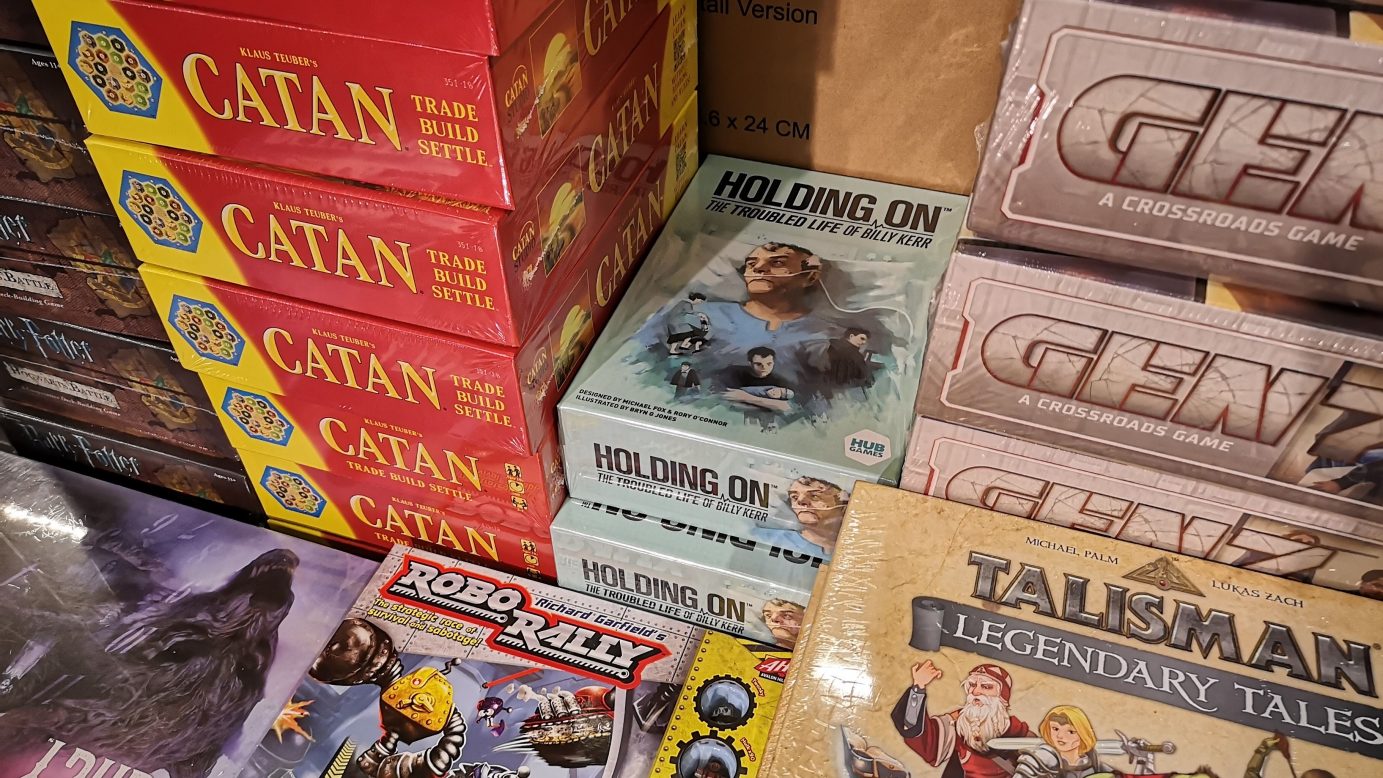 I cannot recommend Patchwork enough, as the /r/boardgamescirclejerk mantra would have it. Patchwork gets a slightly unfair rap when this question comes up. It has often been suggested, with the best of intentions, as a kind of panacea game to get ‘The Wife’, for it is always ‘The Wife’, involved in gaming. ‘She’s a woman, she’ll like sewing’, is the assumption people assume other people are making when the game comes up as a suggestion. And I don’t know, sometimes when it’s suggested that might even be the reason. I think though that’s often an uncharitable view. 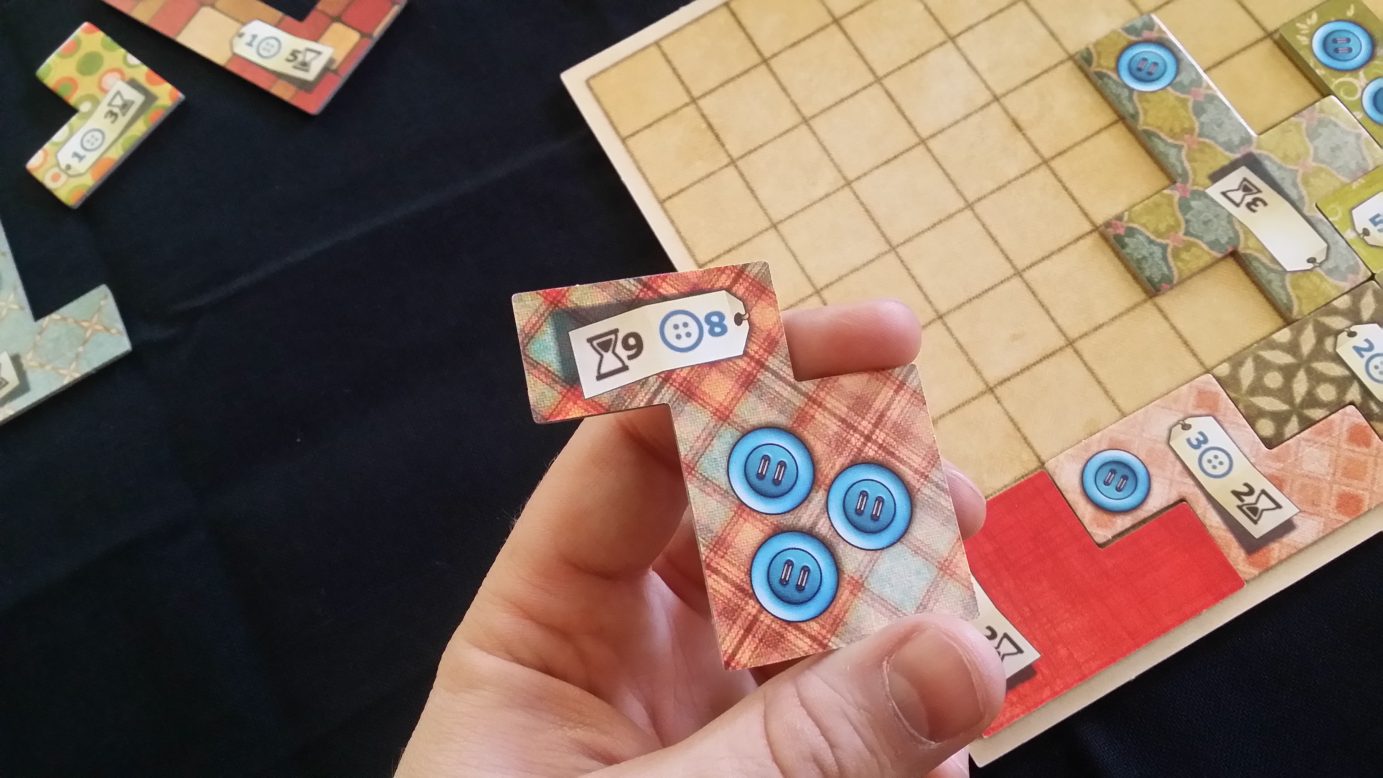 The thing is – Patchwork is a genuinely great game that combines intuitive design with a fierce core of brutal competition. It’s like a version of the Hunger Games where the only weapons anyone gets are needles. This isn’t a frivolous game at all – it’s got all the ingredients to be the source of a massive row after the score is counted. That probably won’t happen though, because a rematch is so much more fun than an argument.

So yes, cliché that it is has become – I thoroughly recommend you check out Patchwork regardless of any outdated gender assumptions. It’s not a great game for ‘the wife’, it’s just a great game.

Arboretum supports as many as four players, but in my experience it’s never at its best at counts other than two. As the name suggests, it’s a lovely game of planting trees in agreeable configurations – gather up your oaks and lay them down into an attractive path that you’d happily walk on a brisk spring day. Except hang on, because it turns out that nobody gets into arboriculture without the killer instinct to survive in such a vicious environment. You want to play out your cards, but also you want to be able to score for the cards you laid. That means making sure your opponent doesn’t. Only one of you gets points for each type of tree, and you want to make sure it’s going to be you. 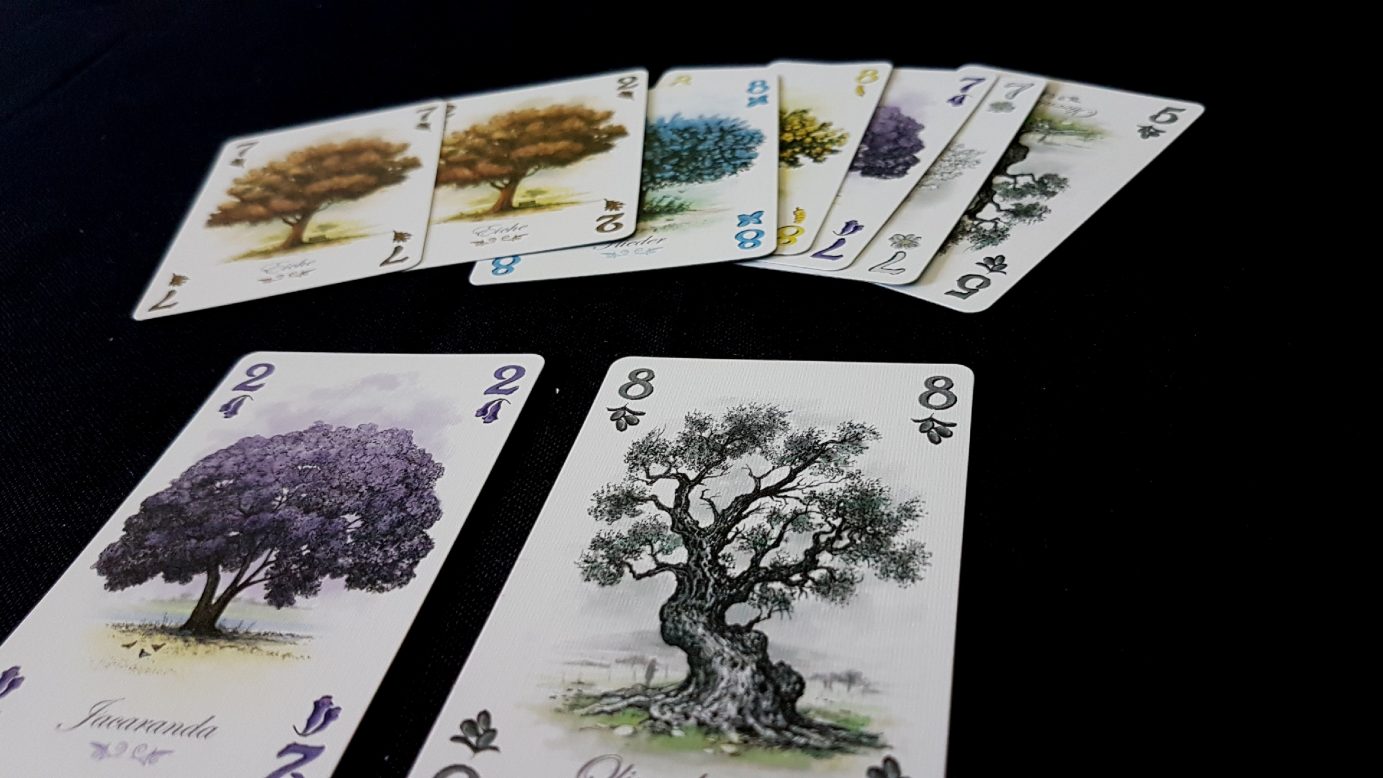 At two players, Arboretum is as tense as the cold war at its hottest. You can only score a species of tree if you have the highest sum of that tree in your hand, but the score you get depends on how many of those trees have been planted. As such it’s a game of pretending you don’t care about things that are consuming your thoughts, while getting your opponent to believe you’re invested deeply in trees that actually give you zero joy. All of this while you play a game of path-building that is, in itself, interesting enough to carry the whole experience.

Arboretum, as is fitting for a game designed around the lungs of our world, is a breath of fresh air.

Oh My Goods, which supports up to four players, is an enjoyably clever engine builder that works on the idea of converting raw goods into ever more processed form until they attain their apotheosis which is to be rendered into pure, 24ct ‘victory points’. One of its most enchanting, if somewhat underutilised, features is that of the production chain – where you can have all the parts of a supply infrastructure whirring away to produce something special and in considerable quantities. Your sheep become wool, your wool becomes sweaters, your sweaters become the garb of Saturday night variety show hosts. It’s all very satisfying. 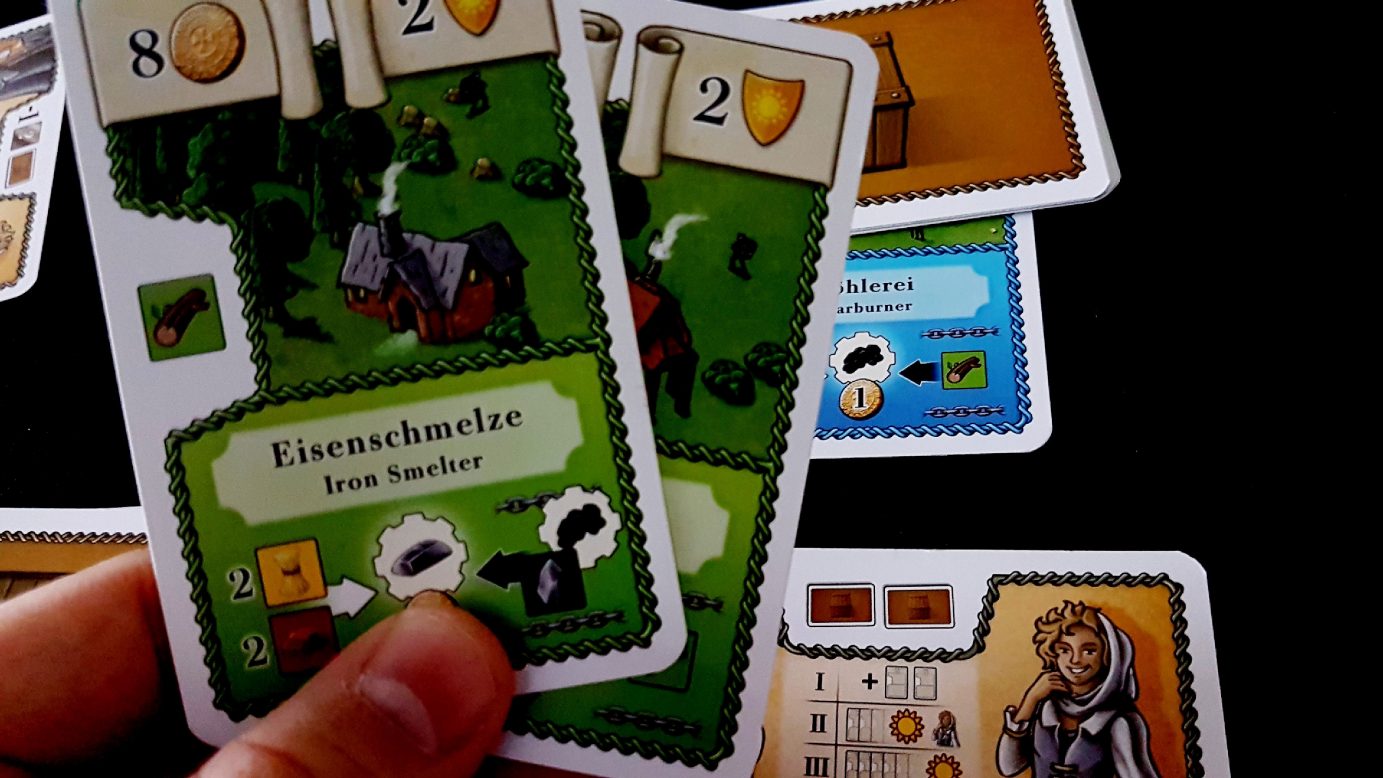 What makes this work so well is a kind of ‘Texas Hold ‘Em’ style of industrial forecasting – you make guesses as to what you can produce based on imperfect and faulty foreknowledge of the consequences of your decisions. A bit like we’re all doing in the face of Brexit, really. You guess well, and you reap the rewards. Guess poorly, and things will go predictably wrong. Just like with Brexit. Oh My Goods weaponises the gamblers’s fallacy to turn your past self into your own worst enemy. I’m sure that’s something with which we can all empathize.

One Deck Dungeon is a rogue-like dungeon crawler with character advancement and special powers – and it’s all driven by a single deck of cards. It’s really an exceptional design that deserves a lot more attention than it gets. The standard box supports one or two players, and you can buy a second to upgrade that to three or four if you like. It’s a superb solo game, but it’s also a wonderful two player experience. One where you collaboratively decide which of the challenges the game presents are the ones you’re going to face, and how you’re going to face them. Somehow arguing about who is going to tackle which chore is less of an issue when those chores are ‘Kick some Goblin in its dumb, stupid face’ and ‘Courageously steal all the money from this loose treasure chest’. 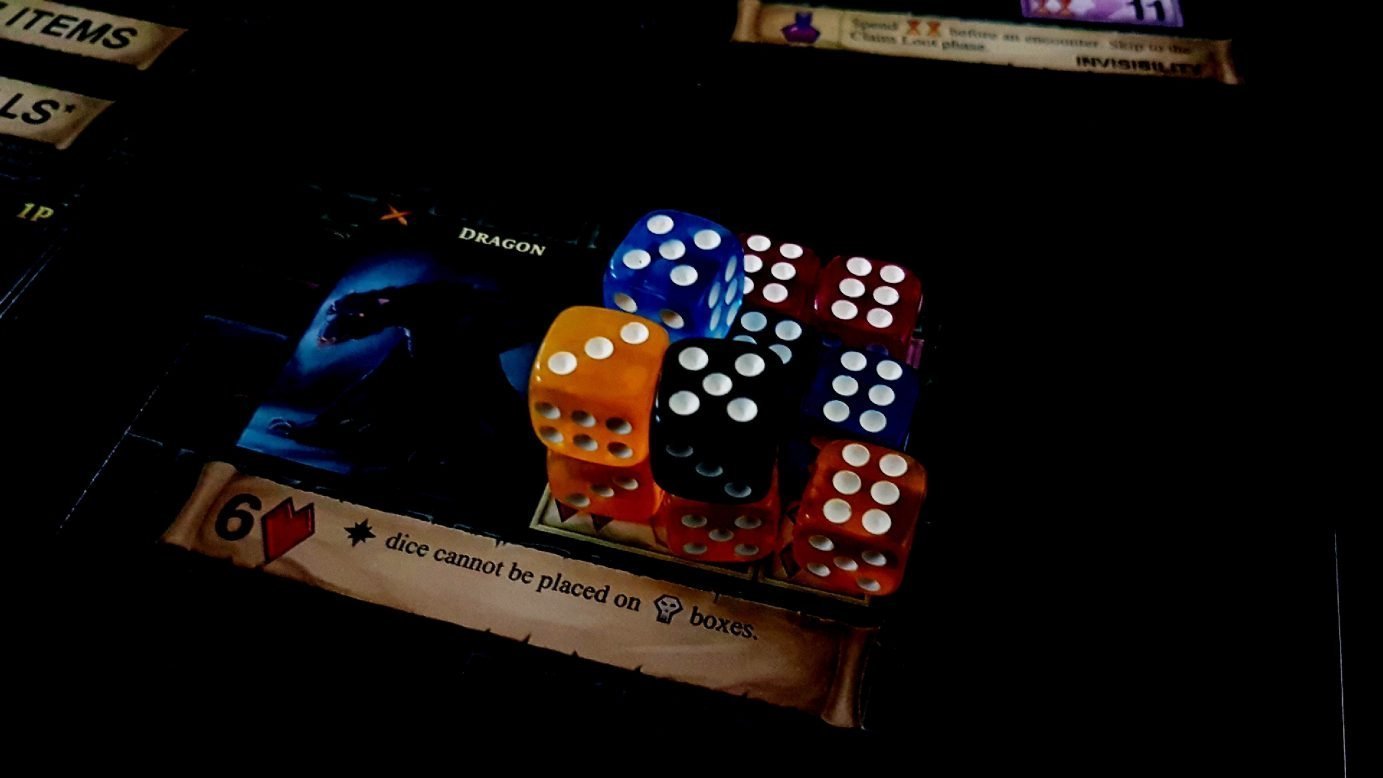 Literally the only reason One Deck Dungeon isn’t higher up in this list is that there just isn’t quite enough of it to really elevate it to where it should go. I would like to have shelves creaking under One Deck Dungeon expansion content, and aside for one supplementary box, that hasn’t yet been forthcoming. Make no mistake though – until the novelty dries up you’ll find this an absolutely excellent game to play with your significant other or bestest goodest-ever pal.

Poker is a game that needs a good number of people to bring out the fun. Except perhaps for strip poker, where the fun becomes more awkward the more people are involved. Schotten-Totten (which is Old Scottish for ‘A Tot of Scotch’) solves that by giving both of its players a veritable buffet of poker hands they’re carefully curating. You compete over control of the stones that mark clan boundaries, and the player that most carefully plays their cards to each of the stones will win control of the Scottish Highlands. Or something. This is not a game with a strong story. 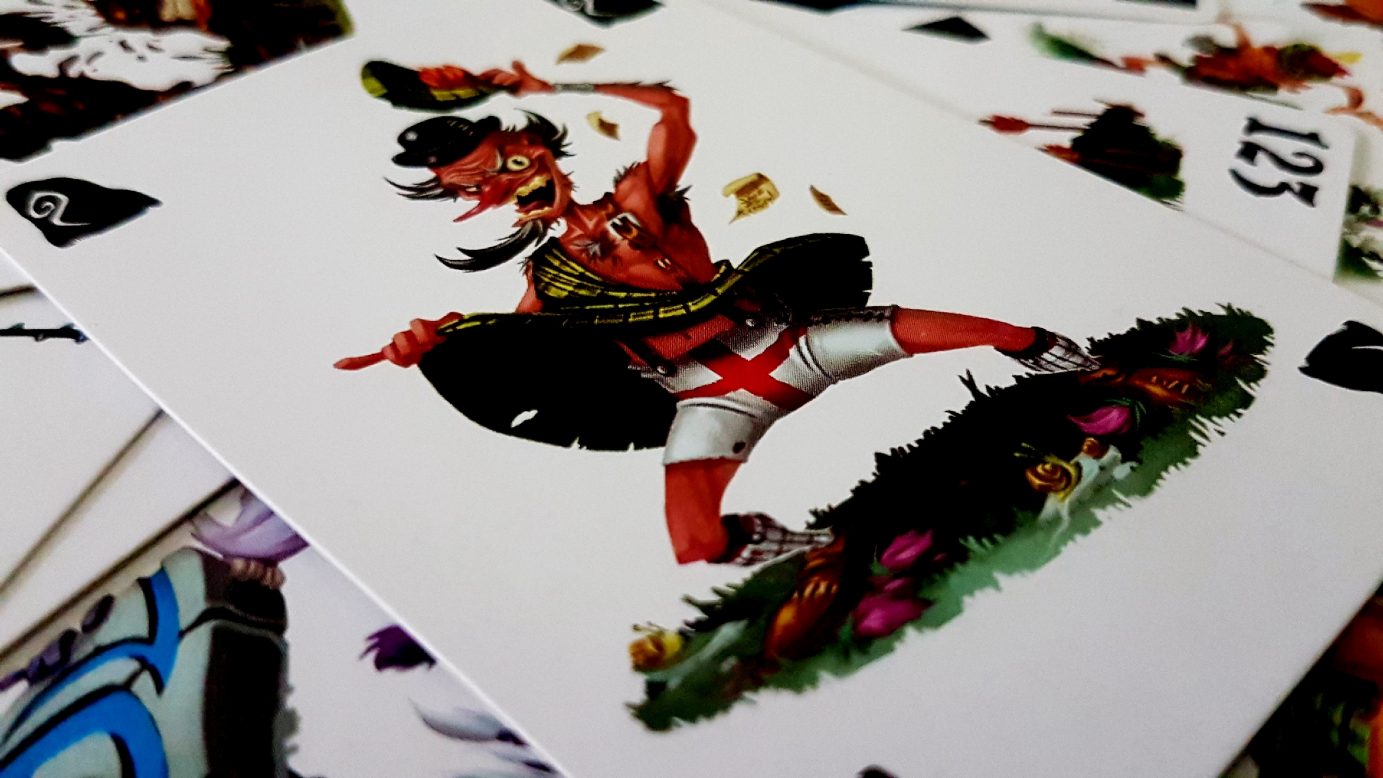 What elevates this from fun to fantastic is the presence of special tactics cards that let you modify the hands that have been played down, and in unexpected and interesting ways. Maybe you’ll concede one stone after forcing an opponent to over-commit, moving a key card somewhere else. ‘Och’, you’ll say. ‘Got ye now ye wee walloper’. And then they’ll play down a tactics card of their own to reveal one of your best soldiers was a dirty wee sassanach traitor all along.

The Iello edition of the game is just glorious – full of genuinely affectionate and knowing Scottish stereotypes that raise a laugh rather than an eyebrow. Even the tagline of the game, ‘Kill or be kilt’, is very endearing. Crivvens, michty me, etc, etc.