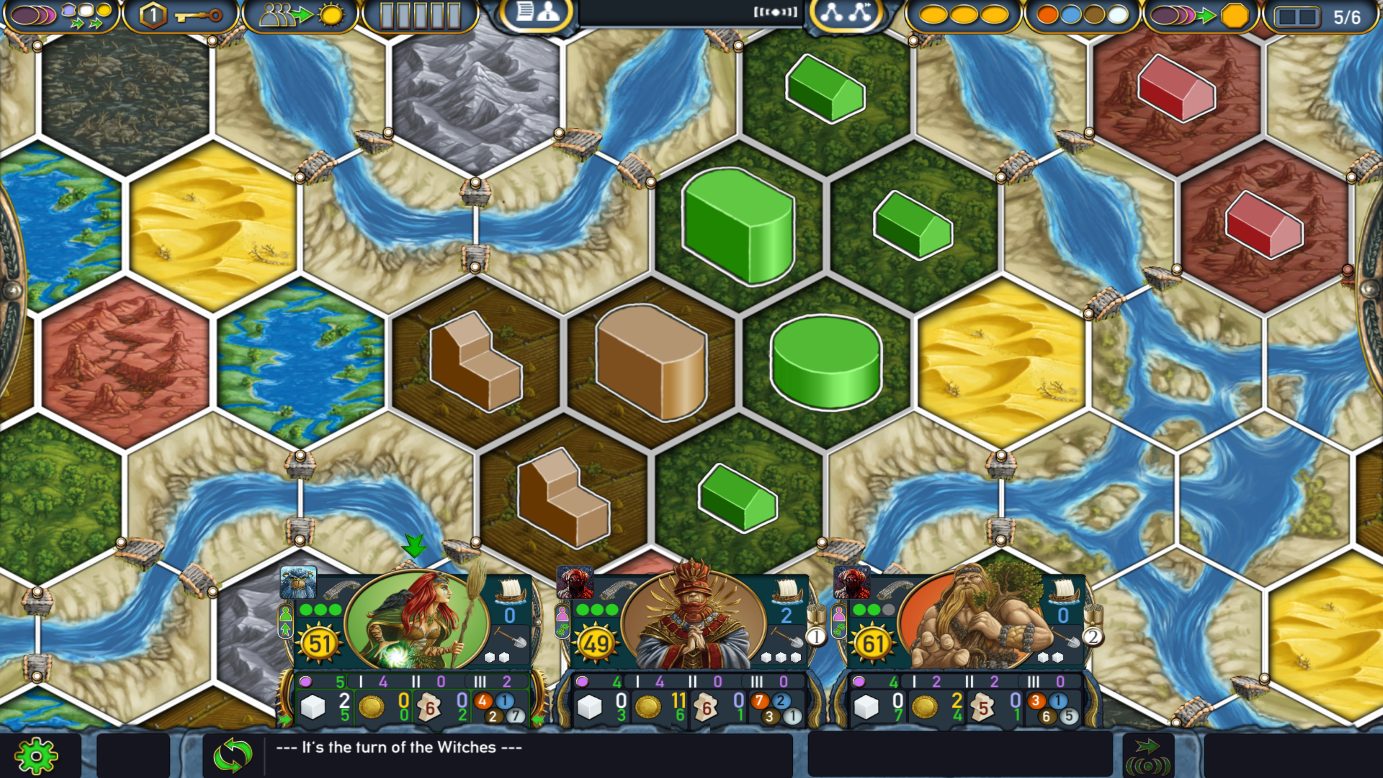 Meeple Like Us Best Board Game Apps – Five to One (baby, one in five)

Number 5 – The Castles of Burgundy (Digidiced) 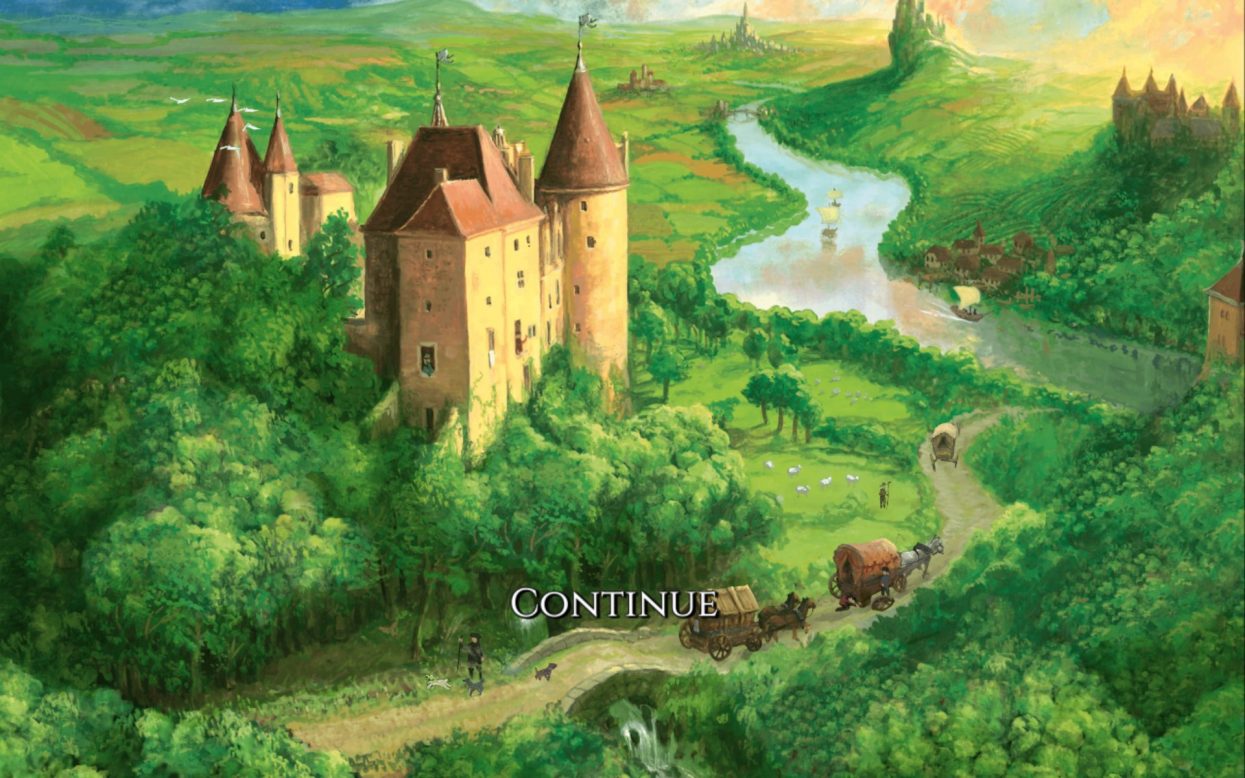 Castles of Burgundy is probably the ugliest game I own, with the most unpleasant graphic design of any game I like. It’s actually visually exhausting to play, with the weirdly perverse palette adding a cognitive burden to every action that you take. That it’s a great game despite all of this is a good sign – an aesthetically appealing digital edition has nothing to lose and everything to gain.

And that’s exactly what you get with this app – I could have done without the unskippable animations, but it’s a lovely looking game with a clear interface design and an appealing aesthetic that violently deviates from that of the physical game. I think some of the visual chrome may be over-compensation and I would like the game to be faster rather than prettier – that doesn’t stop me regularly firing it up though and that’s enough to get it on our list of best board game apps. 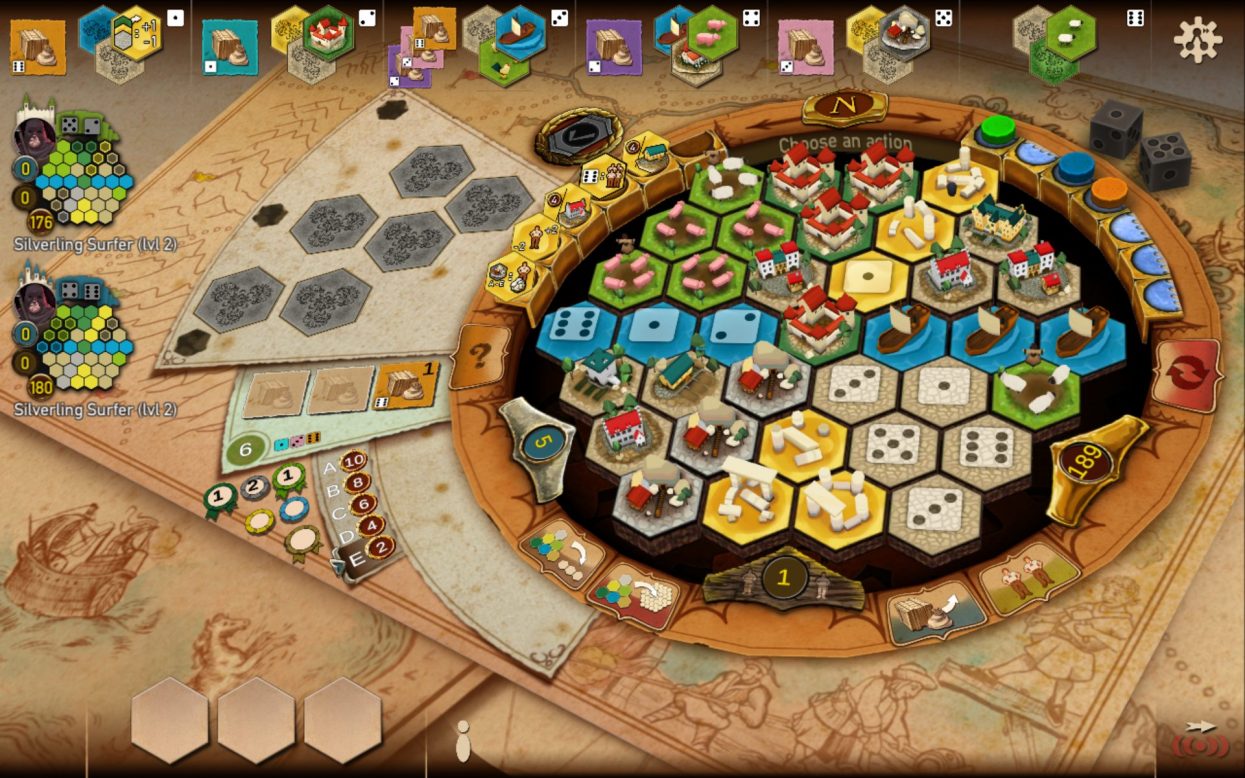 We’ve already seen a Digidiced game appear on this list (Terra Mystica) and its setting menu is exactly the same. Language settings, the ability to switch HD graphics on or off, toggle sound and music, and set the gameplay speed. Even at fast though this isn’t a fast game and it’s because every time you finish making your choices the board rotates away underneath a kind of trapdoor and the next player’s board rotates up. If this were made optional I could see Castles of Burgundy rising higher up this list. Sometimes the only thing getting in something’s way is its own self-indulgence. 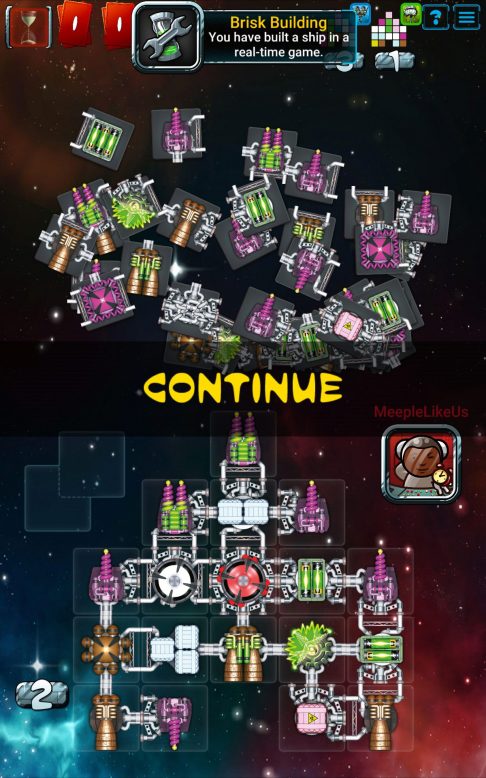 Galaxy Trucker has always struck me as two games in one – a fun, frantic and hilarious game of comically inept ship-building followed by a long, ponderous and not very entertaining scoring round. The digital version of the game compensates for this considerably by getting rid of the admin and just concentrating on the fun of anarchic space-ship misadventure. Add to this a great and funny campaign, excellent visual effects, and a series of game-modes that are fun and enjoyable in their own rights.

If Galaxy Trucker were just a pitch-perfect implementation of the board game, it would deserve a place on this list by virtue of how well it’s done. However, the fact it makes it a better game by emphasising the best parts is what puts it as high as it is here. The best board game apps elevate their games in some way, and that’s certainly true of Galaxy Trucker. 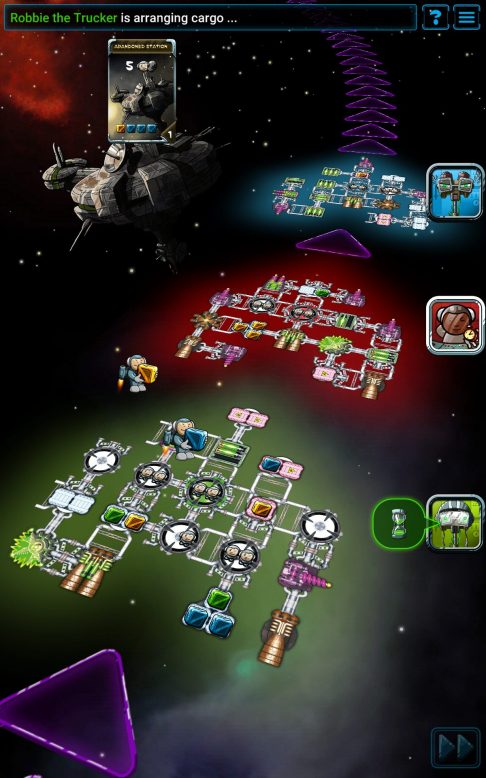 In terms of settings, I like how it gives you an option to set your handedness in the profile creation – a literal accessibility option – but otherwise it only lets you change the sound and music volume. It does though at least let these be done independently. 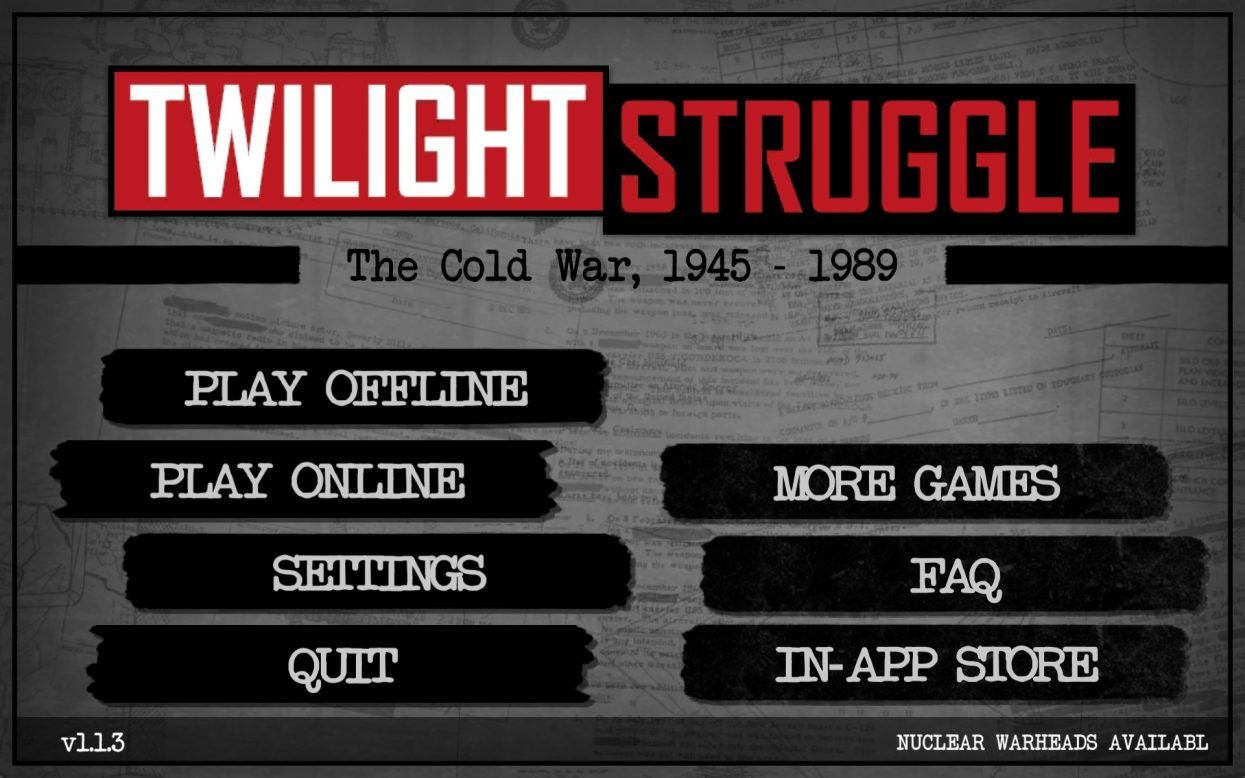 Twilight Struggle is an amazing game – an important, weighty game that has been justifiably praised for almost fifteen years. Its model of self-destructive brinksmanship is deeply educational and imparts real insight into the madness of the cold word with every revealed card. ‘I would never have brought the world so close to annihilation’, you say as you take possession of your first hand of military and political options. A few minutes later you’re the one pushing the world to the edge of war just to see who blinks first. As an encapsulation of cold-war doctrine and game theory it’s hard to beat – but it’s also fun. This is educational in its best possible sense – gamification of history in a way that is all about the game and precious little about the ification.

The app implementation is almost perfect – dark sinister music is overlaid onto a period appropriate aesthetic where the sound of static and Morse code is the backdrop to your own paranoia. Graphical elements are typed onto the screen before they are redacted away. It’s immersive in a very satisfying and visceral manner. Added on to this it smooths out a lot of the interaction grumbles you’re likely to have playing the physical game. It just feels a lot cleaner, and a lot more enjoyable as a result. 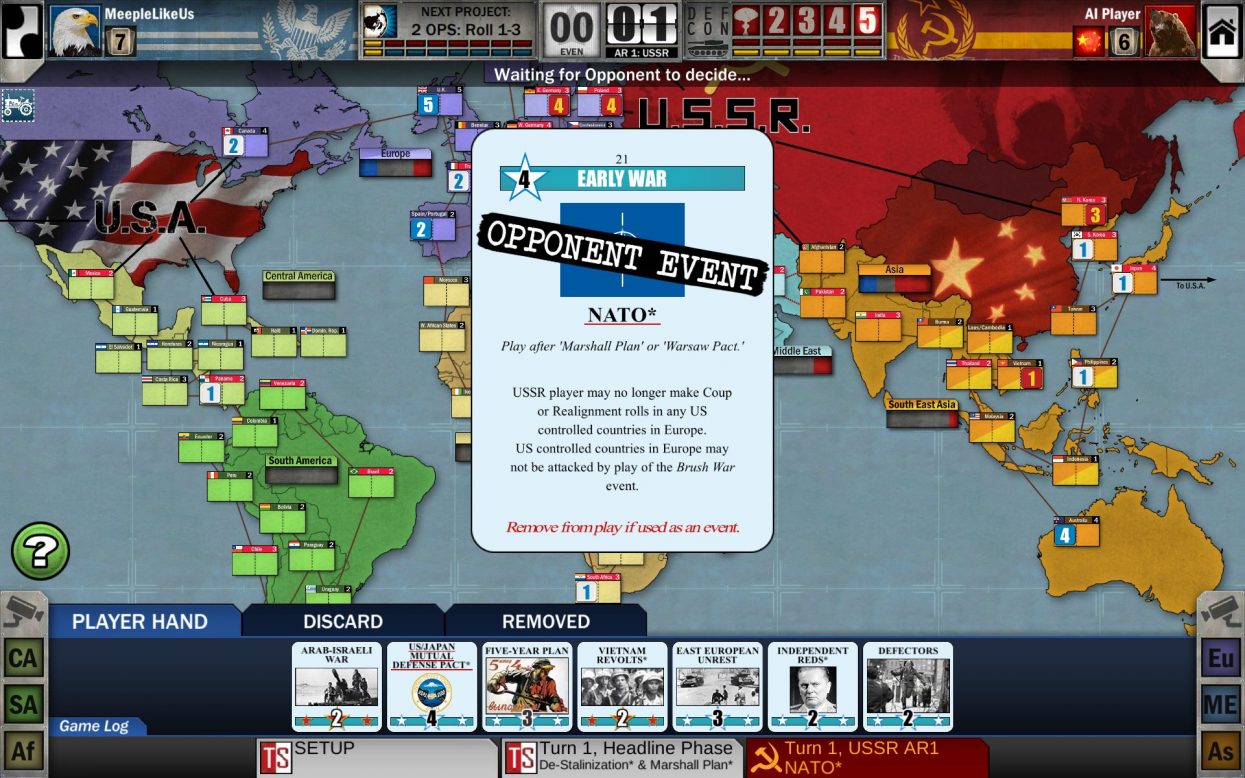 I’m also pleased to see it comes with a bevy of options – you can change the resolution (although mine gives me no alternatives) and put it in windowed mode (which reveals the soft keys if you want them). You can change how the announcements are presented, change the card types, and adjust the music, effects and ambient sound volume. There’s nothing here to slow down the interface if necessary, but to be honest the AI grinds so much you’re unlikely to ever need it. 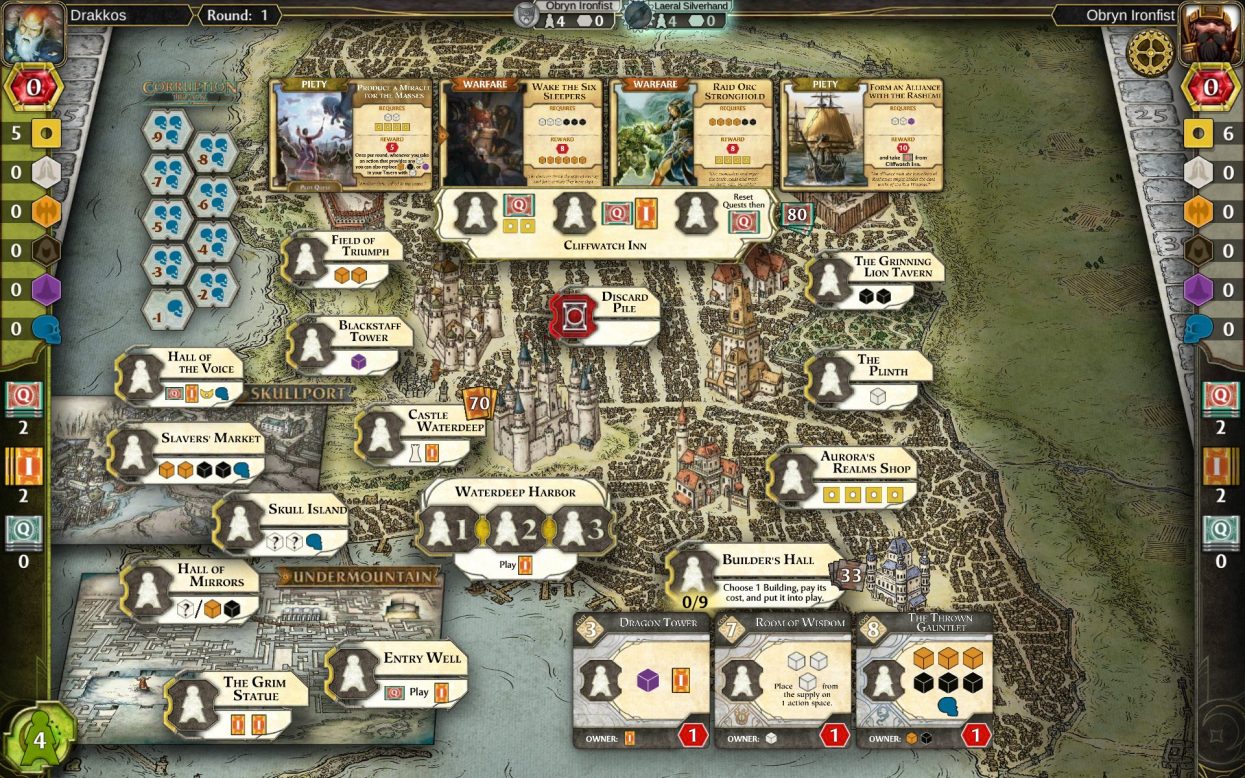 There isn’t anything spectacular about this implementation – it doesn’t change the nature of the game or fix problems of physical play. It’s just a very solid version of an excellent game and I have sunk hundreds of hours into playing it. It’s here purely on the basis of how much I enjoy it, and that’s ‘completely’. To be fair you also need to buy the DLC expansion to really get the most out of it, but once you’ve done that there’s a game with vast amounts of replayability and depth to be found behind its unassuming icon. Some of the games on our list of best board game apps are there because they make the game better in the porting. Not so here – it’s just an excellent game that I have enjoyed far in excess of its price tag.

The sole problem here is that there’s an odd little cyclic strategy AI bug – one intrigue card that’s available is ‘inevitable betrayal’ and it allows you to steal from an opponent at the cost of passing this card into their hand. Unfortunately when that happens what you usually see is your opponents massively over-prioritising intrigue missions to trade that card between them allowing you to dominate the rest of the board unmolested. Occasionally the random number generator at the heart of the game will pass that card on to you, but that may be several rounds later. It’s annoying when it happens, but it doesn’t ruin the game. 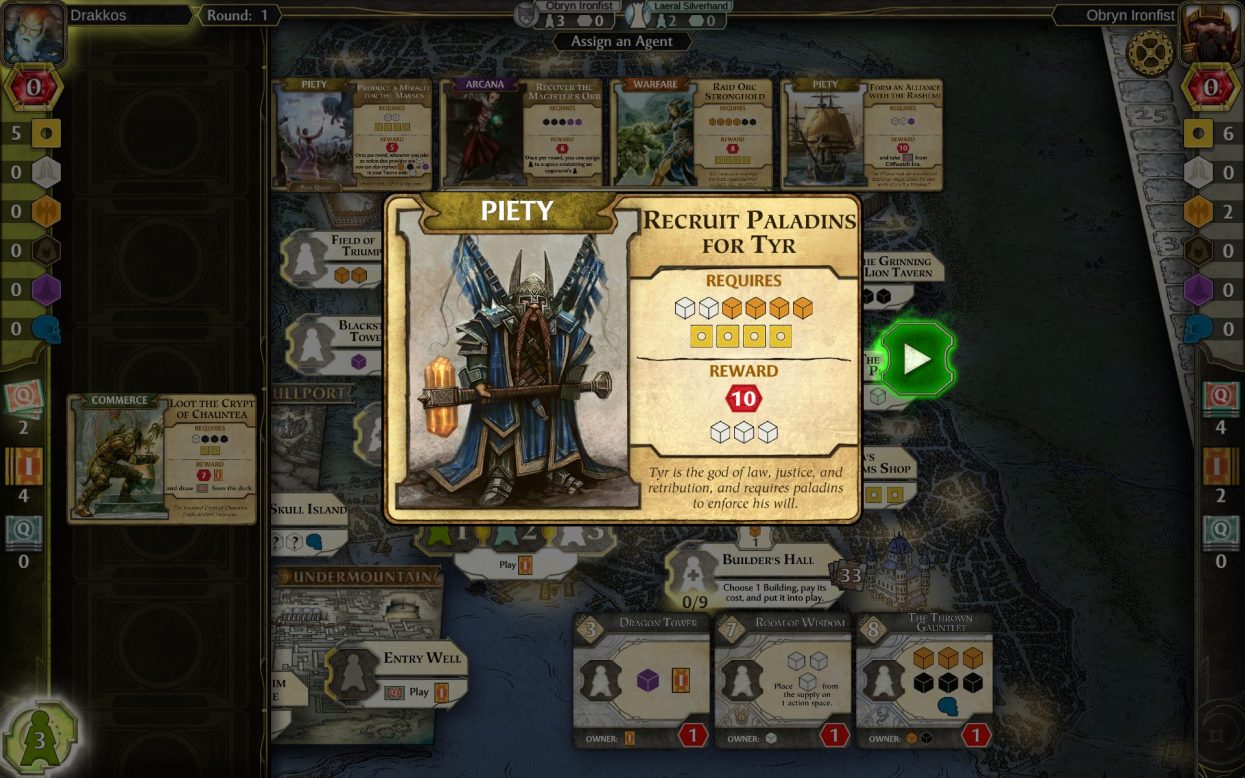 Options are slim – you can set the theme of the aesthetic (if you have the expansion), adjust the animation speeds, and individually set music and sound levels. You can also switch off ambient sound and remove the map parallax. That’s about it.

Number 1 – Through the Ages (CGE Digital) 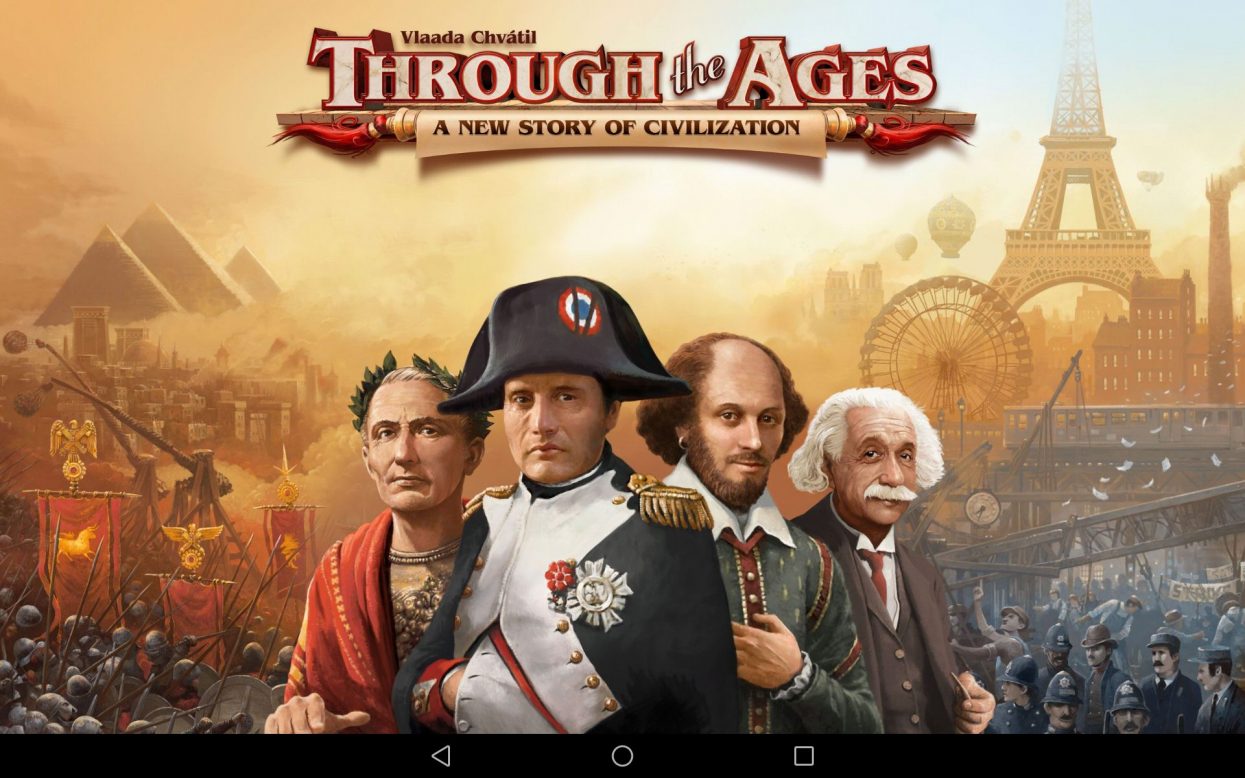 It couldn’t possibly not be Through the Ages at #1 on our list of best board game apps because the digital implementation is genuinely revelatory. The board game is slow, ponderous to the point of being marked by geology rather than chronology, and legendary for its overbearing complexity of resource representation. I like the game a lot, but I don’t consider it to be worth four hours of my time to play it with four people. If I have that amount of time available I can refine it into denser forms of fun. As such, it’s a game that I liked enough to keep but not enough to play. The app though takes a four-hour game and condenses it down into about half an hour. In that time frame, suddenly Through the Ages becomes wonderful. It’s a civilization game that feels epic in its scope, complex in its interactions, and robust enough in its playtime to be a constant delight.

On top of this, there is a glorious sense of humour threaded through that is hard to top. There’s a moment in the tutorial that is so laugh out loud funny that it might well be the single best executed joke I’ve ever seen in a game of any type. It’s good-natured, well designed, well implemented, and challenging enough to keep you engaged. Absolutely top notch. 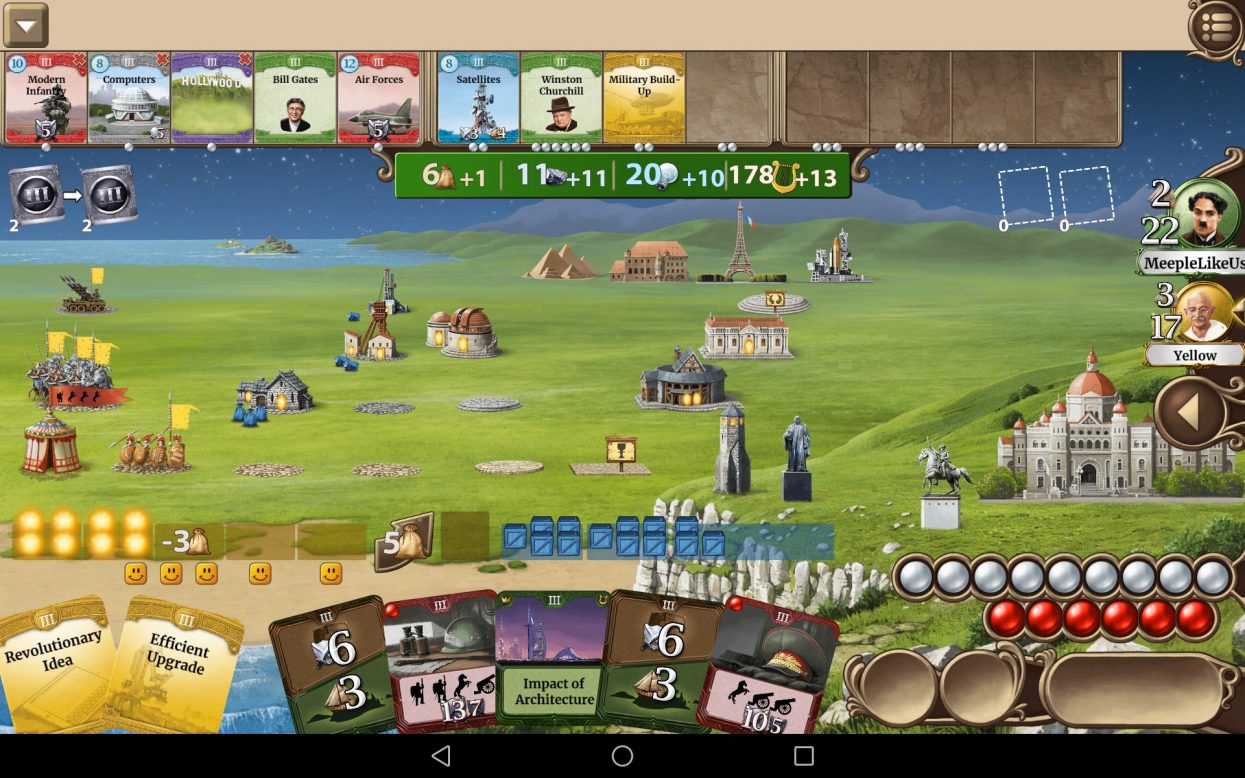 It also comes with a set of options – you can change the nature of notifications as well as the sound levels of music and effects. You can choose the language, but you can also change the nature of the way opponent turns are replayed – how and how quickly the information is presented.