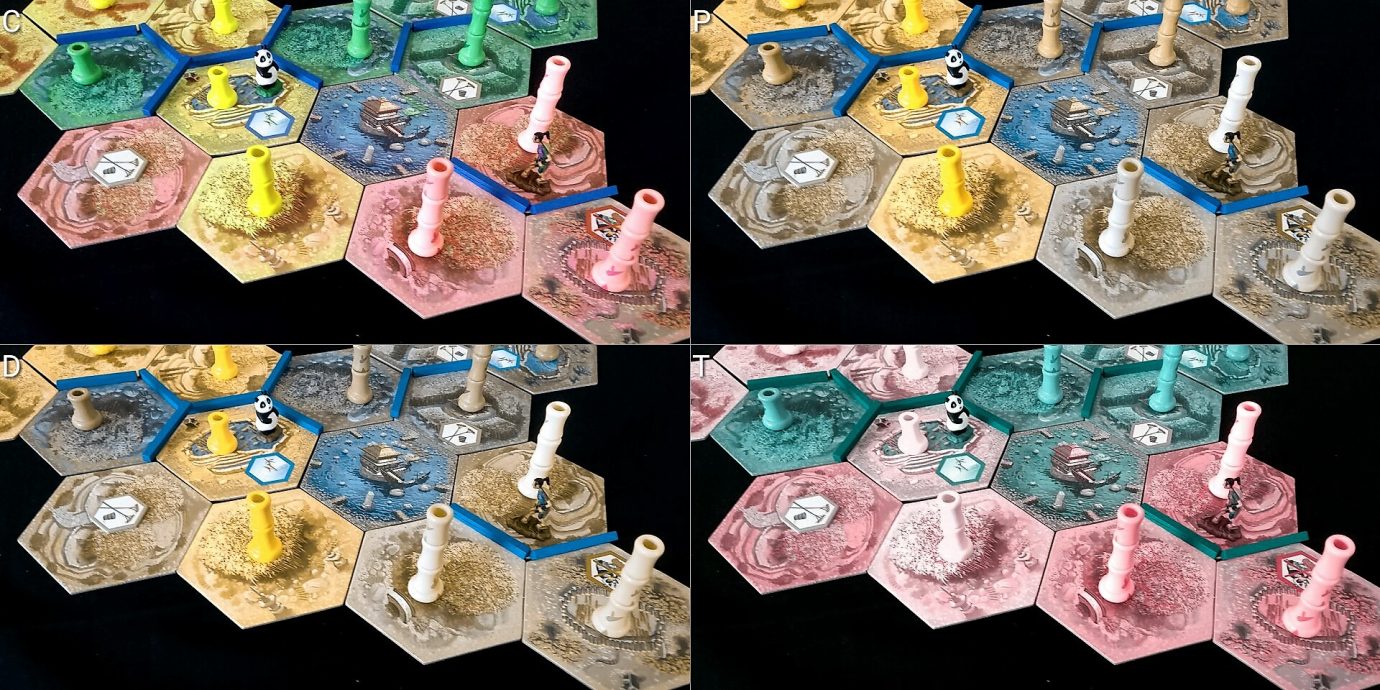 There was recently a Facebook thread where someone complained about the lack of colour-blind sensitivity in a board-game. The responses that followed were – unfortunate. Ian Hamilton, ten year veteran of the battle for video game accessibility, had some interesting answers and gave me permission to reproduce his comment for a guest post. You can read more from Ian over on his website, and you can also check out the excellent Game Accessibility Guidelines.

The thoughts and opinions expressed are those of the writer and not those of Meeple Like Us, although we obviously agree with every word.

Interesting to read through this, it’s like where the video gamer community was I started working in game accessibility 10 years ago. The video game industry is quite far behind other industries, but it is rapidly getting there. The tabletop game industry is way behind even that, but again, it will get there.

And it is pretty standard for an industry that is at this level of accessibility maturity to still have all of the common misconceptions. This thread is a perfect example of that, the misconceptions here are not unique to this thread or to this industry, and there is nothing wrong with someone thinking these things, they’re perfectly natural initial reactions. But they are misconceptions.

There is no dilution, quite the opposite; it is a means of keeping the vision intact, allowing it to be experienced by as many people as possible. It is also not for the benefit of a minority, the benefits are far wider than that. The design considerations made are also a safeguard against printing errors, against lighting conditions (ever tried to play trivial pursuit in a dimly lit room?), and simple usability – dual-coding means easier recognition and recall for all players.

This example from this thread of the game being published by that new publisher who implemented fixed after early play-testing is a perfect example. No-one could possibly argue that the coloured circles also having shape and pattern in some way detracts from the game, either in play or aesthetic. I’d argue that the opposite is clearly true

Catering for colorblindness is difficult and expensive, and takes resources away from features that benefit all players

It can be difficult to go back and redesign a game, that much is true. But if you consider it from the outset it is easy, and can sometimes even be free. If you’re unavoidably stuck with using color alone and you’re about to order your counters, choosing to order black/white/light blue/dark orange instead of blue/red/yellow/green is a simple decision to make, the only difficulty involved is just in having the knowledge in the first place. Which isn’t hard.

That the world isn’t one size fits all, the onus is on people with an impairment to adapt themselves to fit the world

This is something known as the medical model of disability, which up until the 1970s was how disability was regarded; as an attribute of a person, a failing in them that they need to treat. This was successfully overturned in the 1970s by people with disabilities, and replaced with the social model of disability. That recognised that the thing that people have is just a medical condition, it only becomes a problem, i.e. a disability, when there is a mismatch between that person’s attributes and the thing that they are trying to interact with, i.e. when encountering some kind of barrier. And those barriers are often (not always, but often) put there by another person. That designer has caused that person to have difficulty; if a different design decision had been made, the disabling situation would not have occurred.

The global adoption of this understanding of what disability really is is the reason why there are accessibility and disability rights laws all over the world. The global recognition and acceptance that it is entirely within the powers of designers to decide whether or not what they’re designing is going to become a barrier for people or not.

And to the comments about it being quicker for someone to modify the counters themselves rather than the designer do it – you’re comparing one person to another person, which isn’t the right comparison to make. Multiply the time needed to mod counters by the total number of colorblind players the game has, and then compare that to the trivial amount of time it would have taken for the designer of the counters to have considered colorblindness early in the process.

Also consider that perhaps someone who has been dealing with this their entire lives might actually have managed to think up the idea of modding counters by themselves before, whether or not counters can be modded is not what the issue is here.

That this is people getting offended by color choices, symptomatic of a SJW/blame culture

No-one is ‘offended’, taking offence is categorically not what accessibility is about. Any negativity is frustration, not offence, frustration at being excluded for no good reason at all. That’s when people get annoyed about accessibility; not through getting offended about some SJW philosophy, but when they’re unnecessarily excluded from doing something.

That it’s a slippery slope, where next? demands for blind accessible games?

Actually, blind-accessible gaming is totally a thing. And if your game mechanic supports and and it reasonably achievable for you to do, then why not? Sometimes it can be as simple as uploading your manual online, so someone with no vision can use their existing text to speech software to have it spoke out to them.

There is no sliding scale of unreasonable demands. Accessibility is very simple a case of looking at your game, and figuring out what barriers there are to people’s enjoyment, things that get in the way of the players and the designer’s vision. Then figure out which of those barriers are a necessary part of the enjoyment, and which barriers are not. And of those remaining barriers, which of those can be reasonably accommodated within your budget and without compromising the enjoyment of other players. All entirely reasonable.

This is something that designers -want-. Designers don’t make games for themselves to play on their own. They make them for other people, to get their vision out to as many people as possible, and that process, when developing any game for any audience, involves identifying and solving barriers to people’s enjoyment. If there’s an easy way to solve a barrier, and so get that vision out to more people, why would you not want to take it?

Again these are not unusual misconceptions, but they are misconceptions. There’s a very clear lesson that can be learned from other industries that are further along; the more designers/publishers take accessibility into account the more these misconceptions fade, once people get more used to seeing this kind of stuff in practice and realise that it’s not some pointless invasive game breaking thing, it’s just making games better.

Every single person in this thread will have some kind of temporary/permanent/situational impairment at some time of their life, and the likelihood of permanent one increases drastically with age.. once you’re over 65, the change of permanent impairment is 50%. And then there’s your whole gaming group to take into account, one person who can’t play means all of you can’t play.

So you need to be getting behind this, if for no other reason purely from a selfish point of view, if you want to be able to continue gaming as you get older.

Change can and does come very quickly. In video games just two years ago it was front page news if a single game considered colorblindness; now it is progressing towards standard across the industry. And the nature of tabletop games, with a small number of publishers and artwork done at a publisher level, means the potential for rapid change is even higher again.

Again I’ve been working in game accessibility for 10 years, and a considerable amount of my work has been with colorblindness, so please feel free to ask me anything.